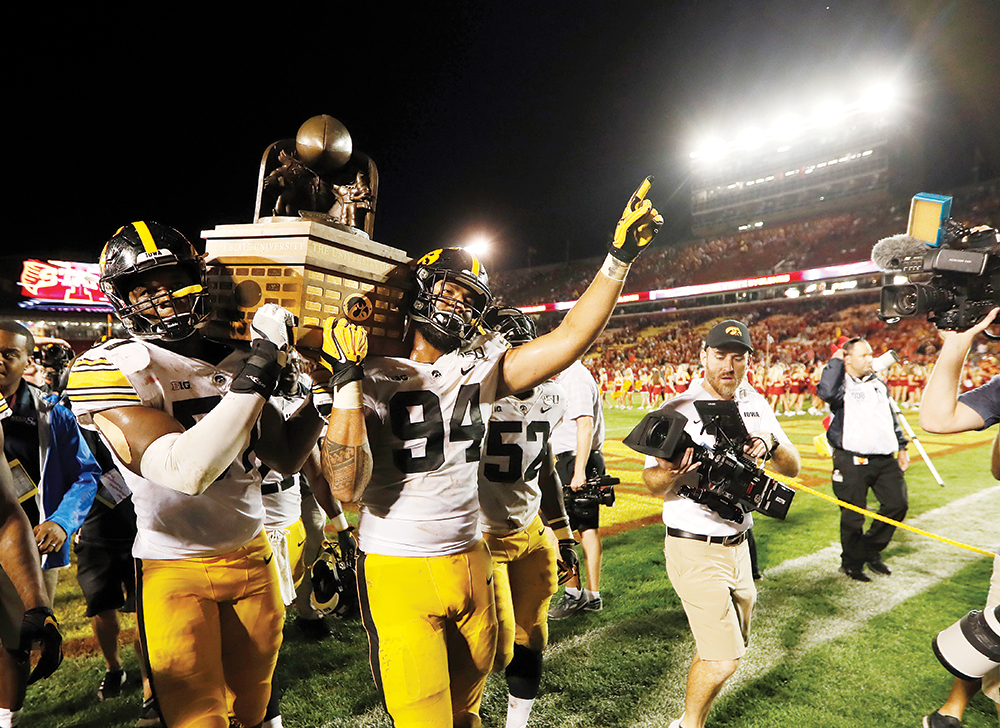 The ISU students jumped onto the field in the middle of the 2-hour, 59-minute lightning delay at Jack Trice Stadium as Iowa State led 7-3 early in the second quarter. But the student body as well Cyclone fans will have to wait longer as Iowa came out on top in the 18-17 win over their in-state rival.

“Certainly a lot of growth from Week 1 to Week 2,” Iowa State coach Matt Campbell said. “Unfortunately [there wasn’t] the growth of the detail and the discipline, which is on the head football coach because that’s my job and that’s my responsibility. Obviously, I didn’t do a good enough job to make sure that those things were sured up because it was really what caught us tonight.”

Iowa held Iowa State (1-1) on a 4th-and-13 with less than two minutes left in the game. The Hawkeyes were stopped on a three-and-out, but on the ensuing punt, Deshaunte Jones muffed it and allowed the Hawkeyes to seal the game with Devonte Young’s recovery. For Campbell, that play was the lowlight of the team’s lack of discipline and detail in the loss.

“The game is in a lot of ways frustrating,” Campbell said. “Frustrating because it was our detail that really [led] to what happened at the end of the football game and in the fact of a loss. 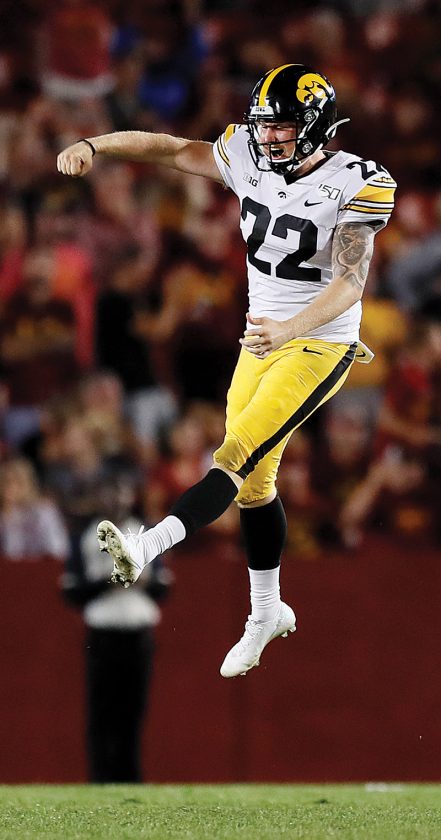 “We can’t give up third downs. Special teams had a couple of errors in the football game. Our kick return was atrocious. It cost us big-time. I think tackling in some situations were tough for us and then consistency in terms of offense football. We got into some really good flows and then we shot ourselves in the foot a couple of times. For me, those are all things that are correctable that’s why for me its way more on coaching than it is on those kids in the locker-room. We have got to do a better job and it will start with me.”

Prior to the weather delays, Iowa opened with a 3-0 lead scoring on the first drive. The Cyclones took the lead with a trick play as Jones connected with La’Michael Pettway for a 51-yard touchdown to make the game 7-3 before the lightning delays.

After play resumed, the two teams continued to trade points. Iowa cut the score to 7-6 with another field goal, but the Cyclones kept momentum on another big play as quarterback Brock Purdy hooked up with Tarique Milton on a 73-yard touchdown pass.

Although the Cyclones found success on the big play and totaled 418 yards of total offense, Iowa State managed to get into the red zone only once. 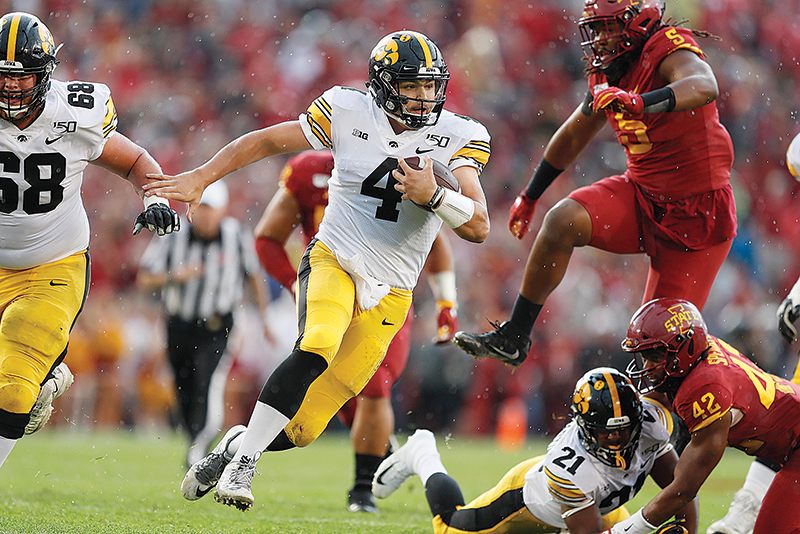 ISU took a 14-6 lead, but the Hawkeyes developed steady drives mostly due to being able to convert 10-of-19 third downs.

“It’s frustrating,” saidGreg Eisworth, who led ISU with 15 total tackles. “It hurts. [Third downs are] something that we harp on a lot and just for it to slip in those moments its tough. We just have to get back to work and correct it. We know what to do.”

Iowa got on the board again with a field goal and then followed with a Nate Stanley touchdown run to take a 15-14 lead. Through the air, Stanley finished the night 22-for-35 for 201 yards.

Iowa State’s only trip into the red zone followed in the fourth quarter but resulted in a field goal to take a 17-15 lead. A bad ISU punt set up Iowa at the Cyclones’ 35-yard line, and Hawkeye kicker Keith Duncan eventually nailed his fourth field goal of the night with less than five minutes to go.

On the next drive, Iowa State marched from its own 35-yard line to Iowa’s 34. It was there that ISU’s lack of discipline and detail culminated into a pair of penalties that forced Purdy into a fourth-and-long. Purdy, who finished 24-for-34 for 234 yards and a touchdown, missed his receiver and turned the ball over. 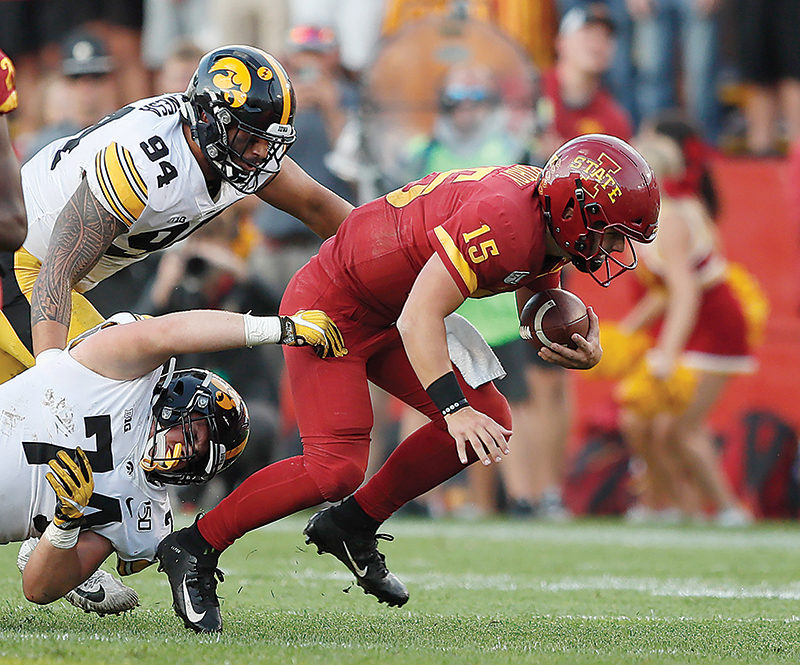 “You get down on third-and-long and second-and-short those kinds of situations in a game where you have to execute and if you don’t then momentum in the game will switch to the other team,” Purdy said. “I just felt like that happened to us a couple times in this game where we could have taken over and really kept going.

“[The loss] hurts for one. For two. We just have to be better in critical situations. I think we will get better out there. I know we will. It’s a long season. I know that this game doesn’t define us. We’ll be ready to roll from here on out.”

“Thrilled to get the victory tonight, proud of everyone,” Iowa coach Kirk Ferentz said. “Real test in mental and physical toughness. Proud of our seniors, they showed great leadership. We’re happy to be 3-0. We have to give credit to our opponent, they played great defense tonight.”

Iowa has a bye week before hosting Middle Tennessee on Sept. 28, while Iowa State hosts Louisiana-Monroe next Saturday.