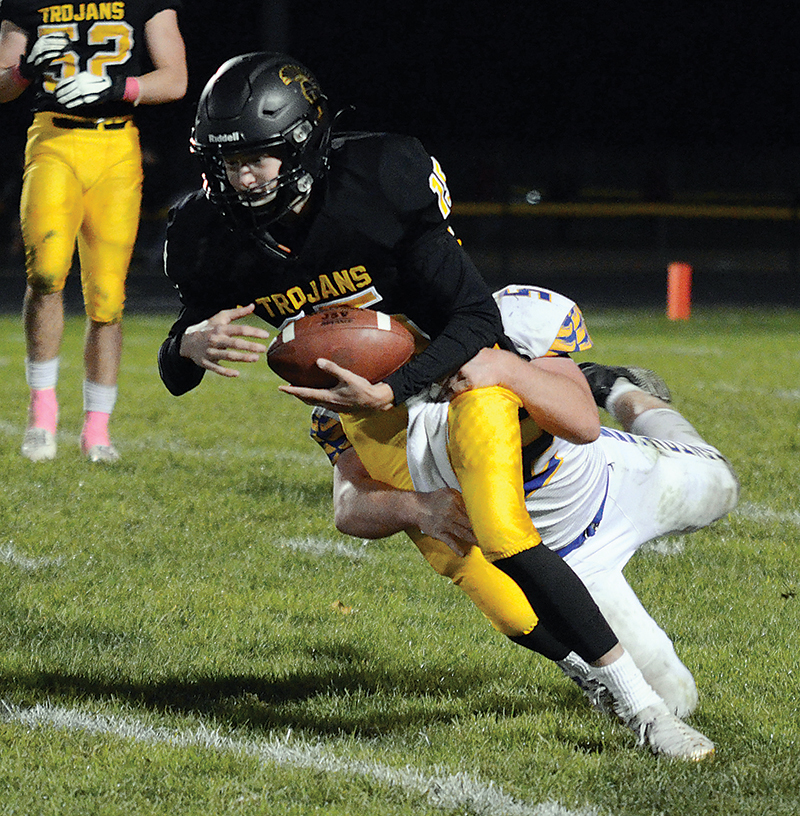 T-R PHOTO BY ANDREW ABADIE - West Marshall senior quarterback Caleb Keigan is sacked from behind by Benton Community defender Austin Roos during the Trojans’ loss to the Bobcats on Friday night in State Center.

STATE CENTER — The West Marshall football team failed to do two things in its 28-12 loss to Benton Community in their Class 2A District 7 matchup Friday night.

The first was in the game itself as the Trojans failed to stop Benton wide receiver Turner Schroeder, who hauled in 10 catches for 259 yards and two touchdowns.

And in the loss, Class 2A No. 8 West Marshall failed to secure an outright district championship and secure a playoff spot.

“[Schroeder] was a good player,” West Marshall coach Cody Hackett said. “We knew who he was and we knew he was their best receiver. He’s tall and athletic. We thought we had a good gameplan in place and maybe us coaches didn’t have as much as there was we thought. He’s a heck of a player and he had some big catches. Some of those plays we mentally broke down and weren’t in the right spots at the right time and they capitalized on it.”

Schroeder made his presence felt early as his quarterback Clay Krousie completed four of his first seven passes in an opening 90-yard touchdown drive. Schroeder then broke out a 77-yard touchdown catch to take a 14-0 lead in the first quarter. 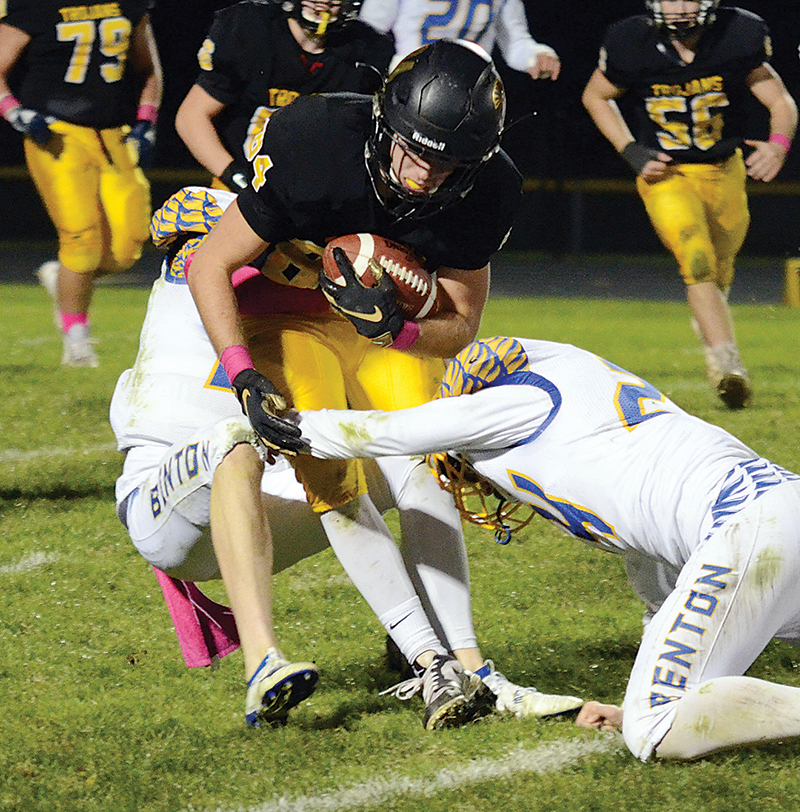 West Marshall answered back with Peyton Pope connecting with Kaden Davis for a 12-yard touchdown pass to cut the deficit 14-6. However, Schroeder struck again just before halftime and on a 55-yard touchdown catch and run to send Benton into the half with a 21-6 lead.

The Trojans struggled to find consistency on the offensive side of the ball. West Marshall accumulated only nine first downs on the night and gave Benton short field positions throughout the game.

“When you have a stacked box there’s going to be some guys that get unblocked and make plays and they did that. They had a good game plan so props to them and their staff and their players. They played hard. I won’t say our players didn’t because we did too. I never questioned our guys’ effort and toughness. It’s just the way the game went tonight. We gave up some big plays. They have some guys that are pretty athletic and can make people miss.”

Benton added to its lead due to the short field position midway through the third quarter and took a 28-6 lead. Notably, the Bobcats left six points off the board after missing two short field goals. 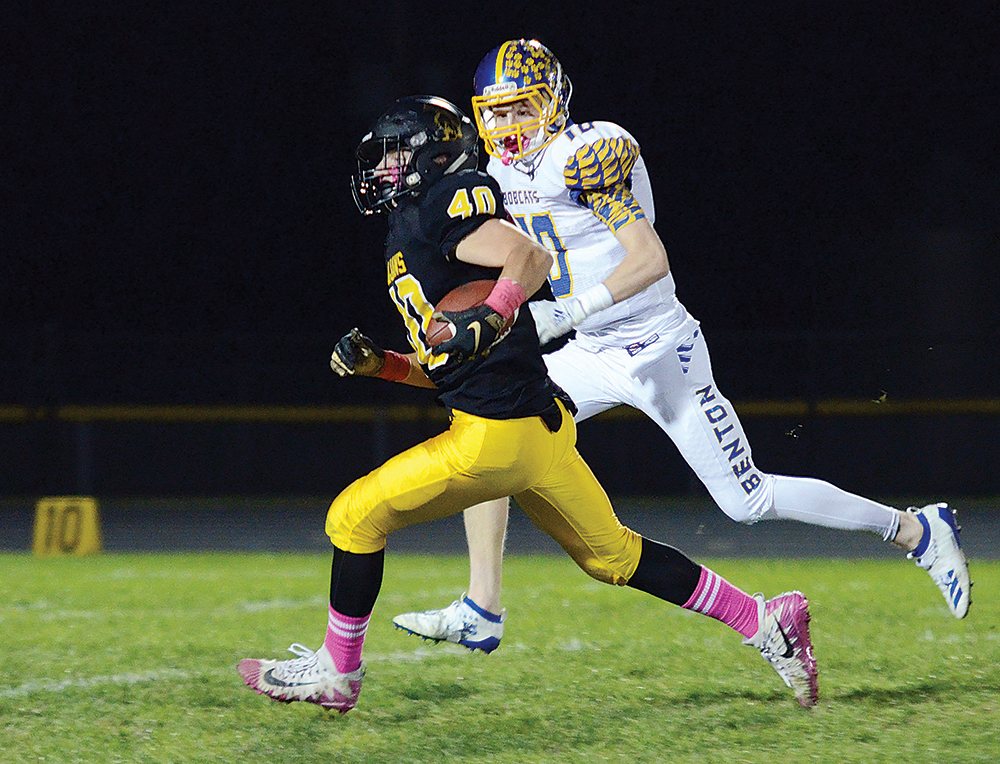 A 42-yard run by Preston Pope set up another Peyton Pope touchdown in the third quarter to cut the deficit down to 28-12.

By the end of the night, Peyton Pope threw for 77 yards and a touchdown, ran for 20 yards and touchdown and also hauled in an interception.

For Benton, Krousie threw for 274 yards, two touchdowns and an interception while running for 35 yards and a touchdown.

“[Peyton Pope’s] a big-time player for us and I expect big things from him both offensively and defensively. He was out there and played as hard as he can,” said Hackett. “He does good things especially defensively where he came up with an interception on the goal line. He punts for us, he kicks for us he’s a kid that when you have one of the best players you ask those guys to do a lot of things for you and he did tonight. Maybe he wasn’t as successful as he has been the past few weeks but again I give props to their coaching staff for their game plan.”

West Marshall’s defense kept the Bobcats in check for the rest of the night and set up the Trojans with opportunities to stage a comeback, most notably with a Peyton Pope interception at the goal line. 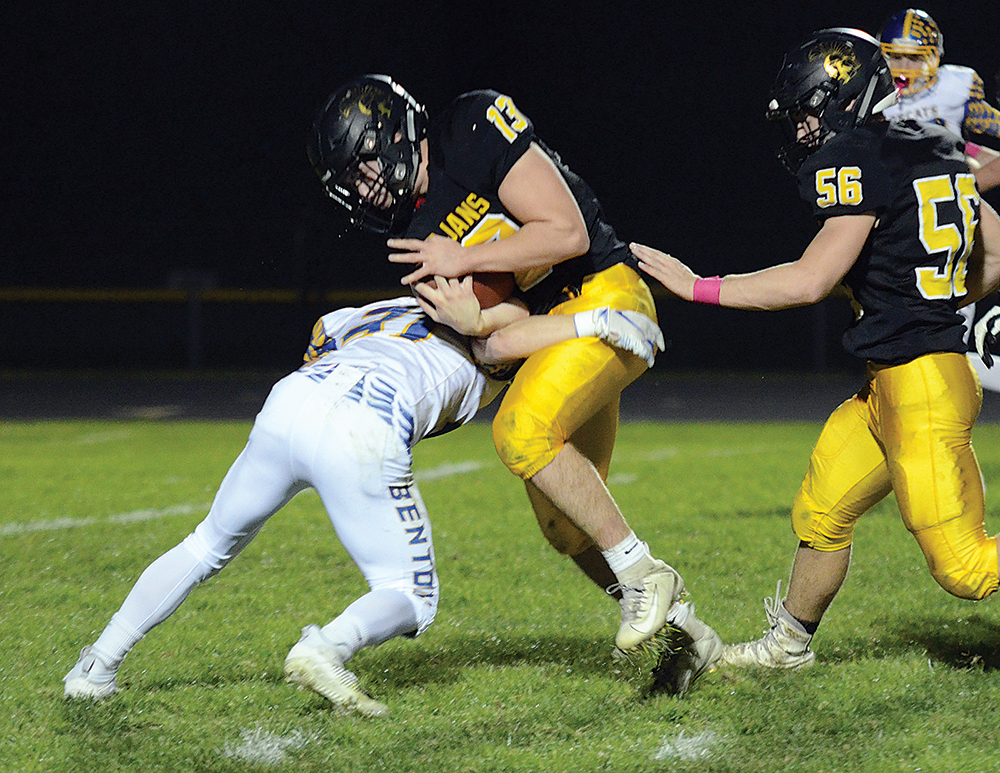 However, West Marshall’s offensive inconsistency continued to plague the team as quarterback Caleb Keigan threw a pair of interceptions late that sealed the Trojans’ fate.

“Overall proud of our guys,” Hackett said. “Big thing is that the season isn’t over. There still possibilities out there that we can get into the playoffs. It’s just we’ve got to bounce back and get to work come Monday.”

With the loss, West Marshall missed its chance to lock down the outright district championship and a playoff spot. The Trojans will have to beat Union next Friday on the road to be part of a three-way tie for first place in the district.

“Every game is big to us,” Hackett said. “With the guys, we have it’s about pride. Next week is going to be even bigger. You never know at 6-3 — there is still some chance that you can make the playoffs but if we want to have a three-way tie for the district title we have got to take care of business next week.