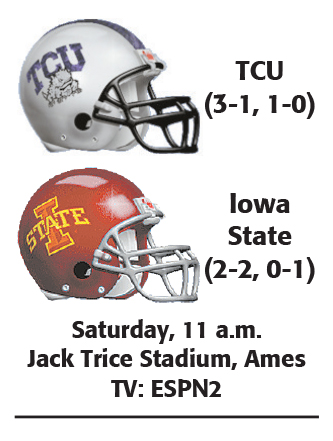 AMES — TCU is still looking for a signature win despite outscoring its opponents by nearly 22 points per game. Iowa State has lost twice by a total of just three points despite having what many thought might be its best team as a Big 12 member.

The Horned Frogs and Cyclones have a lot to prove — both to themselves and the rest of the league — when they meet Saturday in Ames.

This weekend’s meeting at Jack Trice Stadium might be especially important for the Horned Frogs considering it kicks off a stretch of five games out of seven on the road.

“When you go on the road, you have to take ballgames. That’s just what it is, and Iowa State does a good job with all of that,” TCU coach Gary Patterson said. “You’ve got to get ready to play.”

Iowa State also started slow in 2017 and 2018 before rolling in October. The Cyclones are 7-0 in the season’s second month over the past two years, a sign that coach Matt Campbell’s players are committed to his vision even after stumbling out of the gate.

“You look back on the last couple years where, I do think the common trend for us is we’ve gotten better every game,” he said.

The Cyclones and top-ranked Alabama are the only teams to be unbeaten in October dating back to 2016.

TCU freshman quarterback Max Duggan is from Council Bluffs, Iowa, and was recruited by the Cyclones before leaving the state. The four-star recruit quickly seized the starting job in Fort Worth and has thrown for 523 yards with seven touchdowns and no interceptions. Duggan’s completion percentage of 53.4 is a bit low, but Campbell knows that Duggan could be trouble if the Cyclones don’t account for him.

“He never panics. He plays with really good poise,” Campbell said. “He’s been a huge asset to them.”

The matchup to watch when TCU is on offense will be running back Darius Anderson against Iowa’s State’s stingy rush defense. The Cyclones are allowing just 115 yards a game on 3.2 yards per carry. Anderson ranks sixth nationally with 120.8 yards per game and fifth at 8.2 yards per attempt, and last week he became the first Horned Frog with three consecutive 100-yard rushing games in 17 years.

Iowa State’s defense might be a major challenge to a quarterback with just 88 career passing attempts. The Cyclones are allowing just 18.5 points a game in regulation, in large part because of how good they are at confusing opposing quarterbacks with different looks. But Iowa State will likely be without star end JaQuan Bailey, who hurt his foot in the first half of last week’s loss in Waco and is listed as doubtful.

TCU is 37 of 71 on third downs this season. Iowa State is allowing opponents to convert on third down at 42.9%, which ranks 98th out of 130 FBS teams. … The Cyclones are tied for first nationally with just two true 3-and-outs this season. But finding the end zone has been another matter. Iowa State has settled for field goals on six of its 18 trips inside its opponents’ 20-yard line. … TCU is 18-14 on the road as a Big 12 member. … Iowa State has yet to let up a touchdown in the first quarter. … The Horned Frogs are 8-2 against Iowa State and 3-1 in Ames.