Eyes on the prize

Hawkeyes out to break Penn State’s grip on wrestling titles 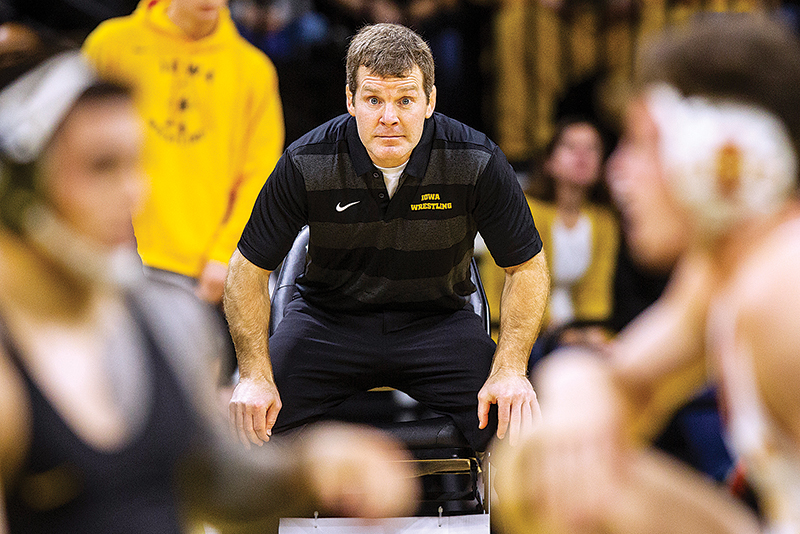 Iowa’s wrestling team enters the season looking as if it is in the best position to end Penn State’s run of national titles.

The Hawkeyes bring back all six of their 2019 All-Americans, including NCAA 125-pound champion Spencer Lee, and two-time All-American Michael Kemerer returns at 174 after missing last season with a knee injury.

“I know what I think of our guys, and I wouldn’t trade our team for any other team,” 14th-year Iowa coach Tom Brands said. “I love our guys. We have the personnel.”

Penn State, which has won four straight team titles and eight of the last nine under Cael Sanderson, is ranked No. 1 in the National Wrestling Coaches Association preseason poll. The Hawks, who won the last of their nation-leading 23 team titles in 2010, is No. 2.

No. 3 Ohio State, No. 5 Nebraska, No. 6 Wisconsin and No. 7 Minnesota give the Big Ten six of the top seven spots in the rankings. Oklahoma State, which has won seven straight Big 12 Tournament championships, is No. 4.

Penn State brings back six wrestlers who have earned All-America honors. The biggest departures from the team that outscored Ohio State by more than 40 points in the NCAAs are budding international star Bo Nickal and Jason Nolf, both of whom won three national titles and reached the finals four times.

Heavyweight Anthony Cassar is Penn State’s only returning 2019 champion. Mark Hall, the runner-up at 174, also is back.

Cassar and Hall are No. 1 in the Intermat individual rankings released Tuesday, as is 2017-18 national champion and 2019 runner-up Vincenzo Joseph (165). Four other Penn State wrestlers are in the top three of their weight divisions and another is sixth.

Lee is Iowa’s only top-ranked wrestler, but the Hawkeyes have six others in the top four of their classifications. A wrestler to watch is Iowa redshirt freshman heavyweight Tony Cassioppi, who was 20-2 competing unattached last season. He had 14 pins, 13 in the first period and five within the first minute.

“We have a heavyweight that our fans and wrestling pundits are going to like,” Brands said, “and I’ll even say that if he does what I think he’s capable of doing, they’re going to love.”

Iowa opens Nov. 17 with a home dual against Chattanooga.

Penn State has won 59 straight duals, the longest active streak in Division I and fifth-longest all-time. Oklahoma State set the record of 76 from 1937-51.

The Lions open Sunday at home against Navy.

Some of the nation’s top wrestlers are taking Olympic redshirt years with eyes on the 2020 Tokyo Games. Three won NCAA titles in 2019: Nick Suriano of Rutgers (133), Yianni Diakomihalis of Cornell (141) and Mekhi Lewis of Virginia Tech (165). Some other notable Olympic redshirts are Oklahoma State’s Daton Fix, the Big 12 champion and NCAA runner-up at 133; Michigan’s Stevan Micic, third at 133, and Myles Amin, third at 174; and Missouri’s Jaydin Eierman, third at 141.

Sloan, ranked seventh at 197, went 24-2 in open tournaments last season, knocking off Iowa’s Jacob Warner by technical fall and carrying over the success at the international level over the summer. Sasso, eighth at 149, won the UWW Junior Freestyle national championship at 70 kg after going 19-2 in open competition. Griffith, ninth at 165, was 25-2 wrestling unattached.

Arkansas-Little Rock, Long Island University and Presbyterian begin competition in Division I, increasing the number of programs to 79. Cal Baptist is in the second year of its transition from Division II.

Little Rock will be an affiliate member of the Pac-12 and is the first Division I wrestling team in Arkansas. Long Island U. moved up from Division II and will compete in the Eastern Intercollegiate Wrestling Association. Mark Cody, who coached Oklahoma for five years before resigning in 2016, is leading Presbyterian’s new team in the Southern Conference.

ON THE WOMEN’S SIDE

Defending women’s champion Menlo College of California brings back five of six wrestlers who won national titles in the Women’s College Wrestling Association, NAIA or both.

Fourteen mostly small colleges will begin competition this year. The NCAA Committee on Women’s Athletics has recommended women’s wrestling be added to the NCAA Emerging Sports for Women program beginning in August 2020.