From running back to offensive lineman, Zach Greiner’s leadership prevails for North Tama 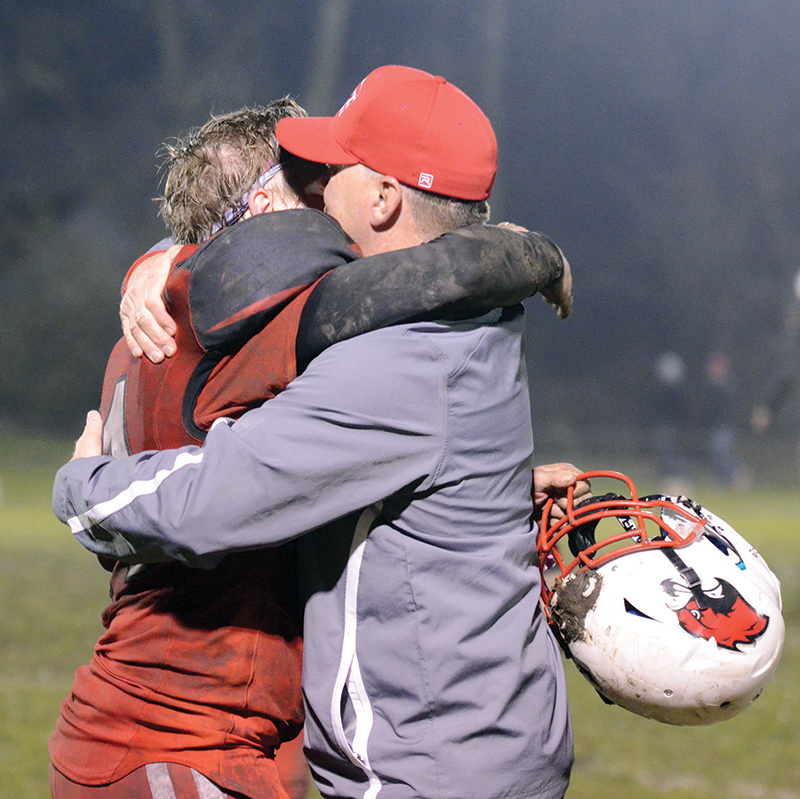 TRAER — In Class A football, it is not unusual to see players having to play multiple positions.

North Tama is no exception to that concept. However, the Redhawks were forced to make a more extreme position change than most teams normally would do by switching over senior running back Zach Greiner to offensive guard.

In the midseason, North Tama’s starting offensive guard Xander Bradley went down with a season-ending injury against Hudson.

“When Xander Bradley got hurt against Hudson we were kind of scrambling of what we should do with the offensive line,” North Tama head coach Tom McDermott said. “We had a coaches’ meeting Sunday night [and] we talked about different possibilities and Zach’s name came up.”

The idea of the position change started in a conversation between Zach Greiner and his dad, assistant coach Craig Greiner, in their home. 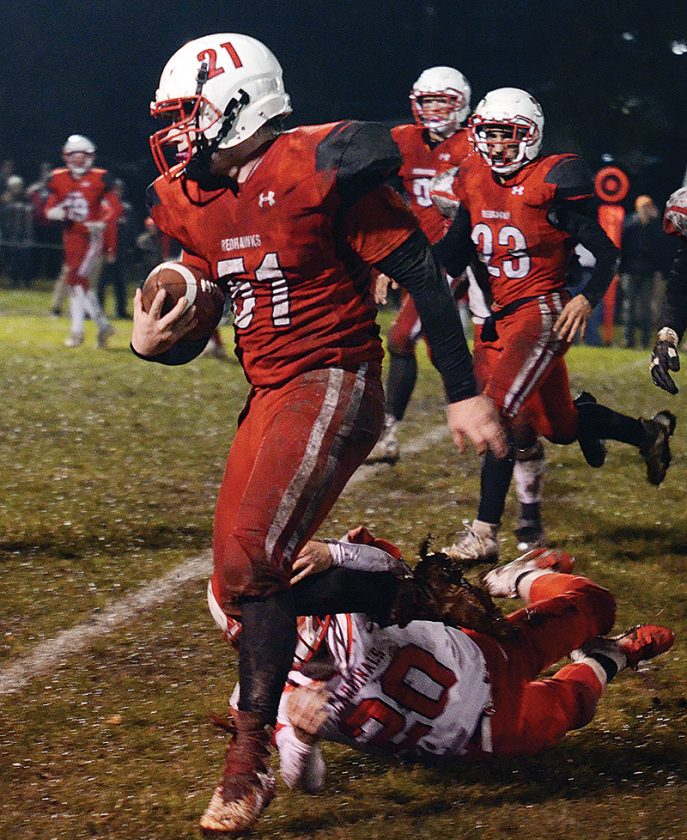 T-R PHOTO BY ANDREW ABADIE - North Tama senior Zach Greiner, left, carries the ball past Central Decatur defender Kolby Hewlett (20) during last Friday’s first-round victory in Traer. Greiner, wearing a 51 on his uniform and 21 on his helmet, has played both running back and offensive guard for the Redhawks this season.

“I was in the basement one night and my dad comes up to me and we were talking about football,” Zach said. “I said ‘I can move to guard if we need to.’ I played running back my whole life and I knew as a team we needed to do that because I didn’t want to throw a young guy in there who wasn’t ready for the moment. I’m a senior and I knew I could do it and step up. The coaches talked about it and thought it would be best and we did it.”

Craig did not exactly take this seriously at first but now gives credit to Zach’s leadership.

“We kind of chuckled about it and he said ‘I’ m serious,'” Craig said “That’s a true captain stepping up and being a leader. Instead of being the guy carrying the ball he said he wanted to block and have guys run behind [him].”

The only issue Zach faced was that he had never played on the offensive line in his entire life.

“The first couple of days were pretty rough,” Zach said. “I had never played lineman ever since I was playing football in third grade. It took me about three or four days to learn everything and after that, it was repetition and getting everything down.

But the position change was not only something Zach was forced to learn but it also became a position that he likes to play.

“I feel a lot better,” Zach said. “I really like playing lineman. You get to hit a lot of people. There’s a lot more going on down there than what everyone thinks in the line. You have to know a lot more stuff rather than what people think which is big guys pushing people around. There’s a lot that goes on there and there is a good group of guys that we’re pushing people around with.”

North Tama’s offensive line did not lose a beat after the position change. In the first four games of the season, the Redhawk line only gave up four sacks, but once the position change occurred the team allowed only five sacks in its next five games.

“In Class A football you are not real deep so you have got to kind of adjust kids when it is necessary,” Craig said. “We always talked about in the offseason about getting our best 11 on the field on offense and defense. That means they have got to play everything on the field and they don’t come off a lot of them, they are playing all of special teams, playing offense and defense so they are just tough kids. They have done it their whole life and they have done it well”

But more injuries in the Redhawks’ last two games had forced Zach back into his running back duties mid-game. In the game against BCLUW, Zach ran for 88 yards and two touchdowns. Most recently, in the first-round playoff win against Central Decatur, Greiner had to step into the backfield again after quarterback Skyler Staker went down with a knee injury. But this time the team was better prepared.

“We had to bring him back in the backfield when Staker got hurt,” Craig said. “He is that kind of kid. He’s a leader. He’s a multi-sport kind of a kid that has been around football for a long time. He understands the game very well. He just ran hard. He does his role and he does his job. Being my son it’s good to see that.

“We had repped him at different positions. With the No. 51 he can’t go out for a pass but he can carry the football. We slipped his 21 number on so we could get him out because we knew Staker was not coming back in the game.”

Zach finished the game with a team-leading 169 rushing yards on 16 carries. For the season, Greiner is third on the team in rushing yards with 359 yards while scoring three touchdowns.

“With Class A, with the limited numbers, injuries are always a worry and were thin at several positions obviously but we got to do what we go to do,” McDermott said. “[Zach] has done a heck of a job as an offensive guard. He really likes playing in there.”