Tritons overtake Tigers down the stretch 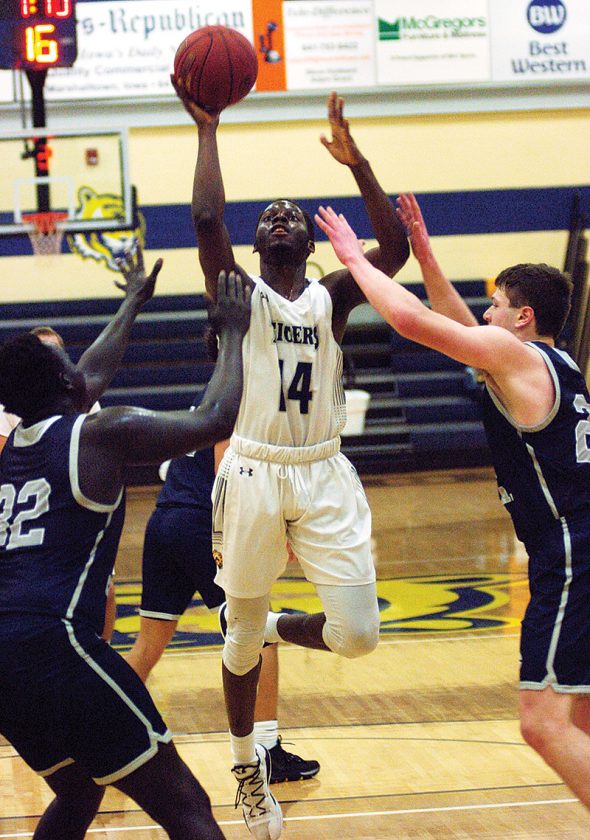 It took a concerted, workmanlike effort for the Marshalltown Community College men’s basketball team to build its two-point halftime lead into a 55-44 advantage with 14 minutes remaining in regulation.

And it took a blink of an eye for Iowa Central to break it all down.

The visiting Tritons tallied a 12-0 run in a span of four minutes to take the lead before fighting off the Tigers for a 71-67 victory in Tuesday’s ICCAC cross-divisional game at the Student Activity Center.

MCC (4-7) turned to a 2-3 zone in the second half to combat its first-half foul troubles and Iowa Central’s dribble-drive, a move that made perfect sense after the Tritons (3-7) shot 1-for-10 from behind the 3-point line before the intermission.

But Iowa Central’s patience against the Tigers’ zone defense paid dividends and cashed out with four second-half 3-pointers and a come-from-behind victory. Marshalltown made four consecutive turnovers — all of them unforced — and the Tritons made each of them hurt. 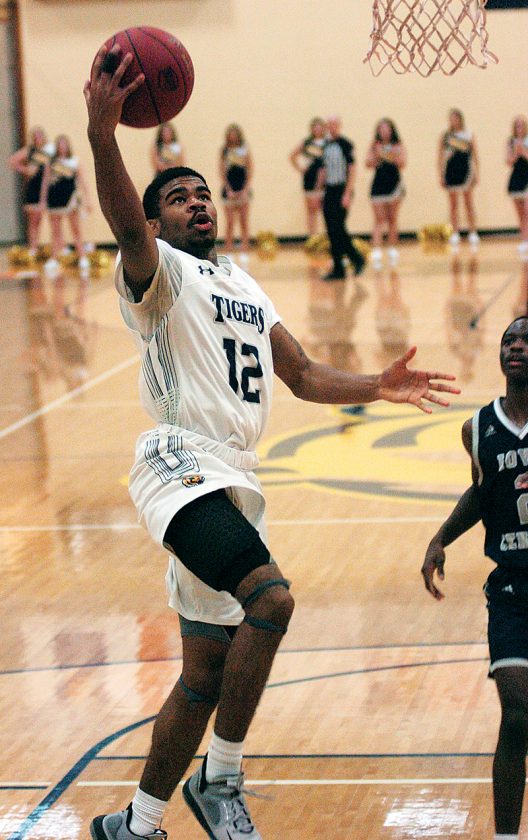 The Tritons got up by as many as six points, 66-60, and withstood MCC’s frantic comeback attempt even though the Tigers briefly regained the lead. Marshalltown scored seven-straight — Odessey Keeling got a jumper to drop, Eric Amandio scored an offensive putback and Jaylin Scott converted a conventional three-point play — to take a 67-66 lead, but Iowa Central regained it moments later on a floater in the lane by Andrew Gibb.

Another unforced turnover gave the ball back to the Tritons with 19 seconds showing, and Iowa Central made 3-of-4 free throws in the waning moments to secure the victory.

“They do a pretty good job of getting to the rim and their mid-range game is good, so for us [the 2-3 zone] was to force them to shoot the 3 — contest it but force them to shoot it — which I thought we did,” said MCC head coach Ryan Flack. “In the first half they were 1-of-10, but the problem was in points in the paint where they outscored us.”

The Tigers’ height advantage was neutralized by Iowa Central’s slashing motion offense, but MCC still carried a 39-37 lead into halftime. Marshalltown had a 39-31 lead before the Tritons scored the last eight points before the intermission, and another bucket out of the break tied it at 39-all.

The Tigers countered with 15 of the next 21 points, with five different players accounting for seven field goals, but Iowa Central answered with the run that turned the tables for good. 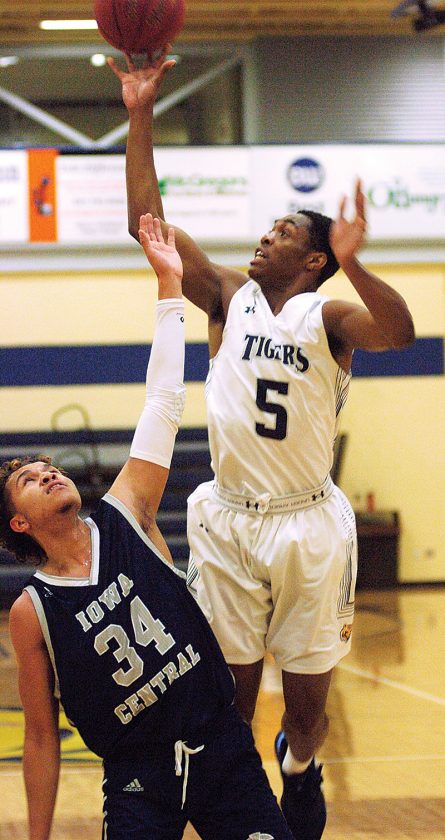 “I thought [the 2-3 zone] was good but anytime they’d catch in the middle, I thought we broke down a little bit,” Flack said of his team’s second-half defense. “That’s something we’ve got to go back and work on in the coming days.”

Gibb led Iowa Central with 19 points, while Jeremiah Hurst had 15 points, Marquis Henry had 12 and Julian Barr added 11 off the bench.

The Tigers were led by Scott’s 13 points and three steals, Derrick Paige and Keeling both had 11 points off the bench, and Amandio finished with 10 points and team-highs of nine rebounds and four assists.

But MCC’s 15 turnovers were too much to atone for when Iowa Central made more free throws than the Tigers attempted.

“Turnovers have kind of been the story for us,” said Flack, “really just those turnovers that are unforced.” 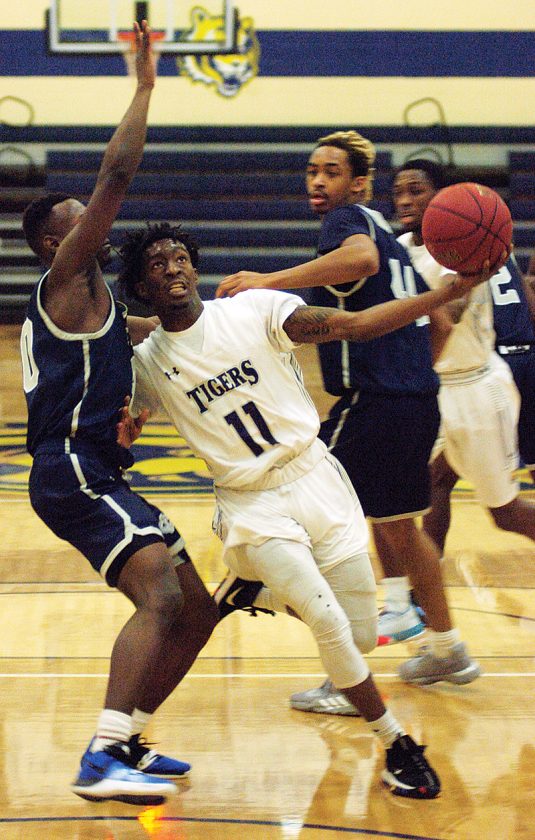 Iowa Central made good on MCC’s miscues, too, changing 15 extra possessions into 15 points.

Marshalltown also struggled to shoot from distance in the second half after going 5-for-11 from beyond the arc before the break. The Tigers were 1-for-13 from 3-point range in the second half, ending with Amandio’s miss in the closing seconds.

“I did think at times our offense was stagnant, probably a little more than the last two games, however I did think we were sharing the ball a little more,” Flack said. “Down the stretch we kind of settled for that 3-pointer and all the sudden in the second half we go 1-for-13 which is just too many 3s for us, especially when we’re not making.

“The emphasis was to get to the line, but we were just settling for that stuff.”

MCC finished 7-of-8 at the free-throw line, while Iowa Central went 12-for-20 at the charity stripe. 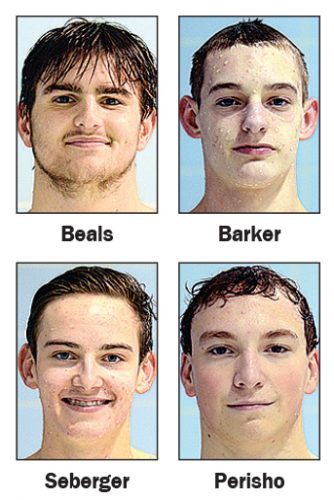 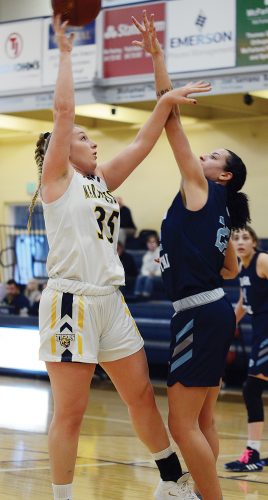 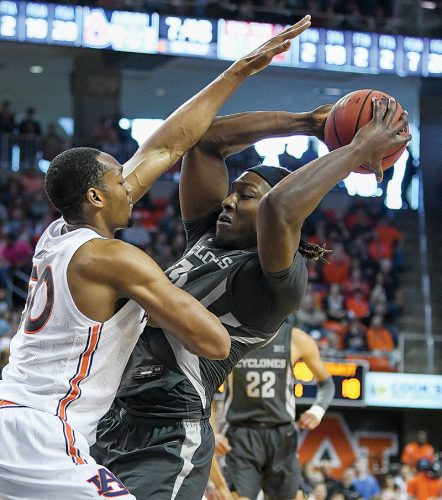