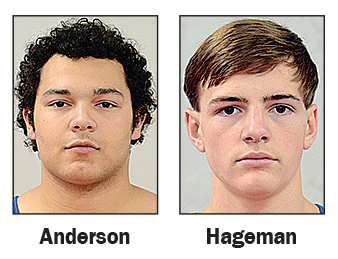 The Marshalltown wrestling team returns the majority of its core starters from a season ago.

Despite returning 12 starters from their district lineup a season ago, some injuries have left a hole on the back end of the roster.

“Most of all of our varsity guys are returning,” head coach Mike Mann said. “We had a couple of good weeks of practice, so we are moving forward very well. We’ll find out what we have once we have our first meet. We’ll see what we need work on and what some of the weak points are and how everybody is handling wrestling this weekend is a change for us. Instead of going to a bracket tournament we are going to go to a dual tournament so kids will get in five matches so we’ll see how our conditioning is also.”

The main area of concern is finding an adequate 195-pounder to fill the role. Currently, the Bobcats’ only option is Jose Martinez who was 5-4 at the junior varsity level in the 220 and 285 weight classes. Marshalltown has lost both of its potential 195-pounders to injuries — Austin Close to a knee injury during football season and Gannon Williams will miss December due to the recovery of a virus. Williams was 15-21 and Close, who was a state qualifier, finished last season 19-14.

“[Martinez] is a sophomore who wrestled JV last year,” Mann said. “We just have a lot of 220-pounders and nobody weighing 195 right now. What kind of hurt us is that I would have two 195-pounders but Gannon Williams had an infection and was in the hospital with a virus. Austin Close, who was the other state qualifier a year ago, he tore his knee up playing football so unexpected, missing two guys out of the gate and there is our empty weight.”

Marshalltown’s only ranked wrestler in the preseason is Jordan Anderson, who is ranked No. 10 by IAwrestle.com. Anderson finished last season 23-5 in the 285-weight class and finished in third at the district meet, which had him just missing qualification for state.

“Obviously [Jordan Anderson] is the person that is ranked and I guess you would say has the most expectations with where he was at a year ago and how he was at districts but it’s a new year,” Mann said. “There are two 220-pounders that placed at state last year that ranked above him at heavyweight. We’ll be hoping he’ll go right out of the gate and be 6-0 by the time we are done with this weekend.

“When [Anderson] first made the lineup as a freshman, us coaches call it like flipping a switch, he just would go to another level, be more intense, be aggressive and that’s what we have seen out of them. Now I hope that he continues to do that and be as aggressive as he could be because he kind of plateaued there and didn’t follow through. Expectations for him are high.”

Filling the 106-pound weight class will be sophomore Edgar Almanza, who split time between JV and varsity to finish with a combined record of 8-11. At 113 will be Javier Rodriguez who finished fifth at the district meet at 106 and with 12-16 record.

“[Almanza] at wrestled 106 and 113, he filled in for us. He impressed me as a freshman,” Mann said. “This year hopefully he’s going to step up and fit his weight class better at 106.

“Javier was at 106 last year off and on. He started great last year and then went level so I’m expecting him to pick up from there.”

At 120, will be freshman Luke Hageman and at 126 pounds will be Saul Pantoja, who posted a 13-16 record and finished fifth at district in the 132-pound weight class. Hector De La Cruz will wrestle at 132 after finishing sixth in districts at the 113-pound weight class last season.

“At 120 we have freshman Luke Hageman,” Mann said. “If he is anything like his brothers he’ll just be a good, hard worker and a guy that brings a lot of toughness to the table. Saul last year was at 120 and is on varsity again. Hector De La Cruz was in and out of the lineup and he’ll be at 132.”

Moving to 138 will be Bennett Hageman, who last year was a state qualifier at the 120-pound weight class and finished with a 20-12 record. Zach Bitker will jump from 126 to 145 pounds after finishing in fourth at districts with a 22-10 record. Jay Drummer will also move up from 138 to 152 pounds after finishing with a 5-15 record, and at 160 will be freshman Nick Rebik.

The 170-pound weight class will also feature a new face with sophomore Dylano Castellanos, who finished 9-6 at 170 in JV. At 220 will be Carson Williams, who finished third at district with a 12-13 record.

“A new guy that broke into the lineup is Dylano,” Mann said. “He wrestled JV last year. You could tell that he had some potential and so this year with everybody moving up he is just going to slip right in there at 170 so I’m excited to see what he is going to bring to the table.”

Marshalltown will open the season on the road against Des Moines Roosevelt tonight at 6:30 p.m.

“Right now we’ll find out with Des Moines Roosevelt [of what we have],” Mann said. “Usually we can handle them pretty well and it seems like we might win by six or 15 points. That’s going to be a good indicator of how salty we are going to be and then also we’ll have Williamsburg this weekend. The expectations are there, it’s just time for these guys to get confidence and deliver.”