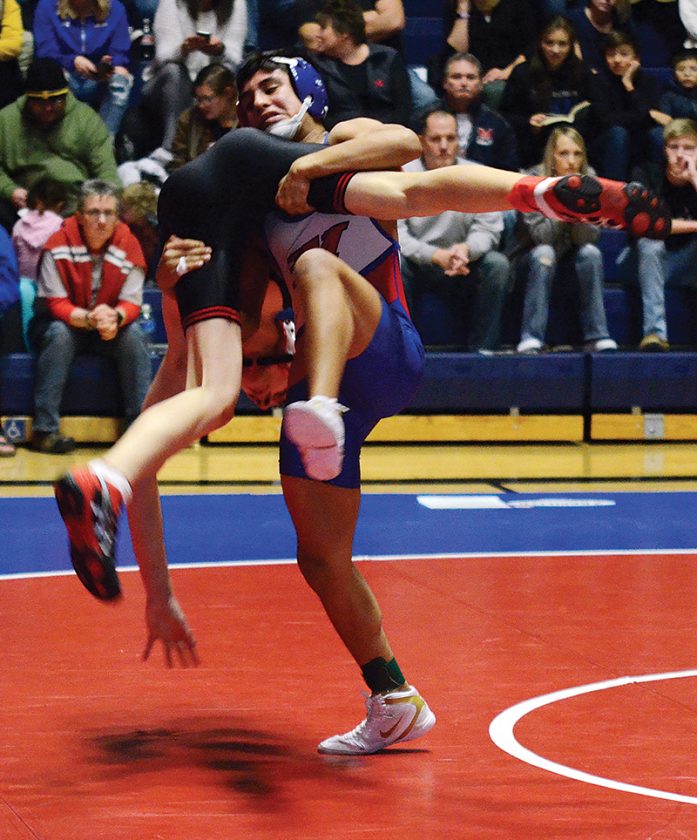 Despite having three wrestlers compete in different weight classes and another making his varsity debut, the Marshalltown wrestling team dominated Mason City 63-7 on Thursday night in CIML Iowa Conference action inside the Roundhouse.

The Marshalltown lineup had Zach Bitker dropping to the 132-pound weight class after previously competing at 145. Jay Drummer debuted at 145 as he previously wrestled at 152, and Coltin Grimm dropped down from 182 to 170.

Making his first appearance for varsity and opening the match was freshman Damion Castellanos at 152. Castellanos set the tone for the Bobcats and came away with the first pin of the night.

“That was awesome,” Marshalltown head coach Mike Mann said. “For Damion, it was his first time on varsity. You never know if kids get stage fright or if they are mentally ready but that was partly due to having four guys at new weights this time.”

Nick Rebik and Grimm both followed with back-to-back pins. Mason City then forfeited the 182, 195 and 220 matches, which extended Marshalltown’s lead to 42-0. 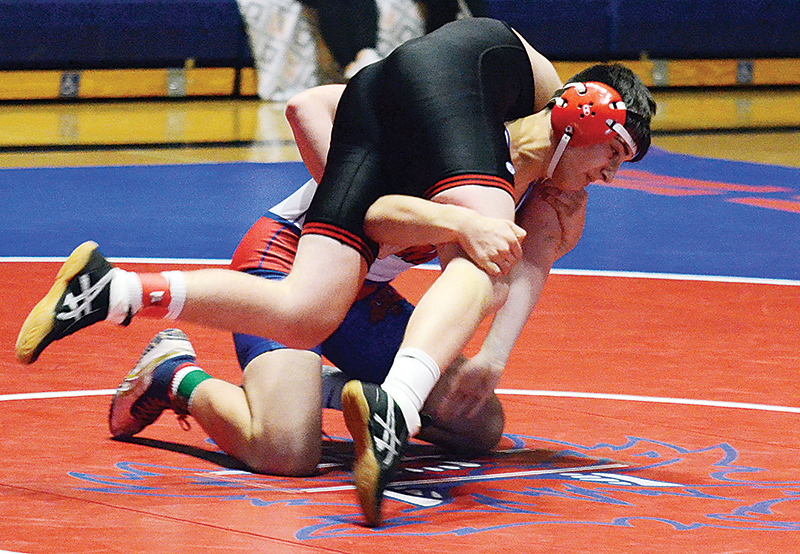 At 285, Jordan Anderson maintained momentum with Marshalltown’s fourth of five pins of the night, three of which came in the first period.

“I felt really good but before the meet but I felt a little nervous just because it’s the first meet back [after winter break],” Anderson said. “When I got out there, I was just ready to go. All my teammates were doing well so that helped me out too.”

“Before the match, I was just thinking to go out and do what you do and take shots. I need to get more comfortable taking shots. I went out and start out with a double and took him down and then let him up. I kept it going for a while. I probably could have pinned him after the first shot but I wanted to work a little bit more.”

Anderson who is ranked No. 4 by both IAwrestle.com and ThePredicament.com maintains his undefeated record of 18-0. 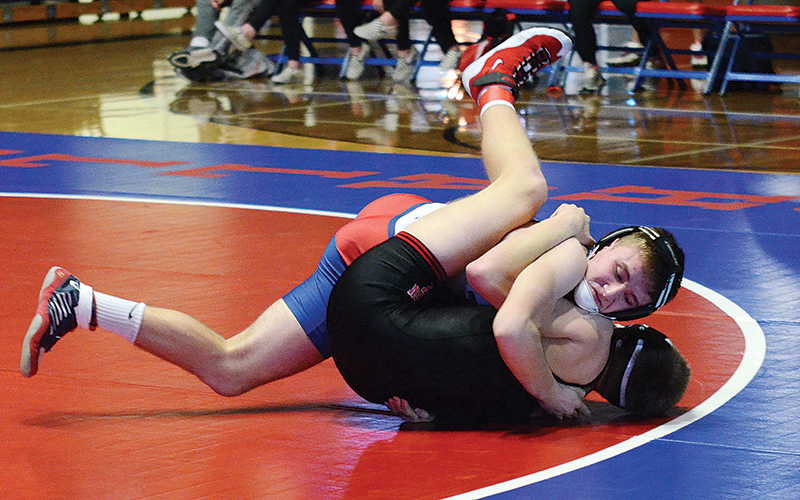 After Marshalltown’s quick 45-0 lead, the tightest competition was featured in the lightweight matches.

“[The match] could have went either way,” Mann said. “We had a big lead and then it started to go away and you are thinking I hope we don’t get tilted again because it would have been 10-9 but he fought it off. That was a great effort.”

The Bobcats’ first loss came in the 113-match as Javier Rodriquez faced off against Jace Rhodes who is ranked No. 5 by both IAwrestle.com and ThePredicament.com and had also finished as state runner-up last season.

Rodriquez fell short in a 19-8 major decision as Rhodes came up with six takedowns and made the score 45-4. 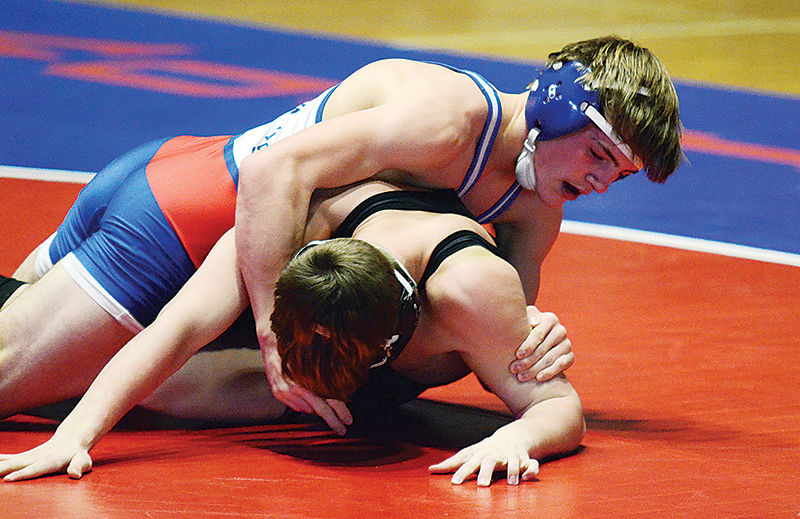 “Javier Rodriquez wrestled the freshman runner-up from a year ago and he was pretty much in the match,” Mann said. “When you go up against better guys, they expose what you need to work on. I hope [Rodriquez] takes away [knowing] what a state finalist feels like and now know what that level of competition feels like and what it’s like to compete against kids of that caliber.”

Following another Mason City forfeit at 120, Sault Pantoja (126) came up with the Bobcats’ fifth pin of the night.

“Cutting [weight] for the first time, he said he was cramping a bit,” Mann said. “We tried to get some salt in him. I don’t know if he had time to eat a banana. So he was worried about cramping which led him to not go down. Us coaches weren’t happy about that, so we feel like he gave the guy one point there. Then he had another escape and gave that guy two points and it ended up costing him the match. In retrospect, he wrestled well besides those mental errors.

Tied at 2-2 in the second overtime Bitker fell just short of winning with a takedown. For Mann, it was a learning experience for his wrestler who despite dealing with cramps had several opportunities to win the match. 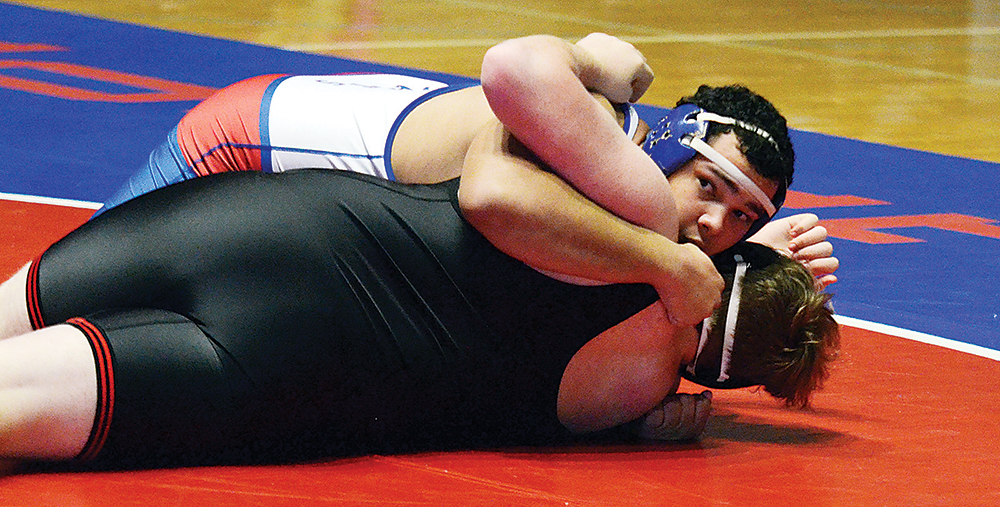 “In overtime, when he picked him up and returned him he was too perpendicular,” Mann said. “The guy hit and bounced off the mat and Bitker didn’t have control. He had three opportunities that he didn’t capitalize on and should have had the match.”

For Mann, the big win was somewhat overshadowed by the multiple forfeits but at the same time, the meet was a depiction of what the Bobcat (7-7, 1-2) lineup could look like at its fullest potential.

“We’d probably feel a lot better if all those were wins weren’t by forfeit and those guys had matches. That was good winning those matches we should have won. Basically, we probably should have only lost one match tonight against the defending state runner up.”

Marshalltown will host the Allie Morrison duals on Saturday starting a 9 a.m.