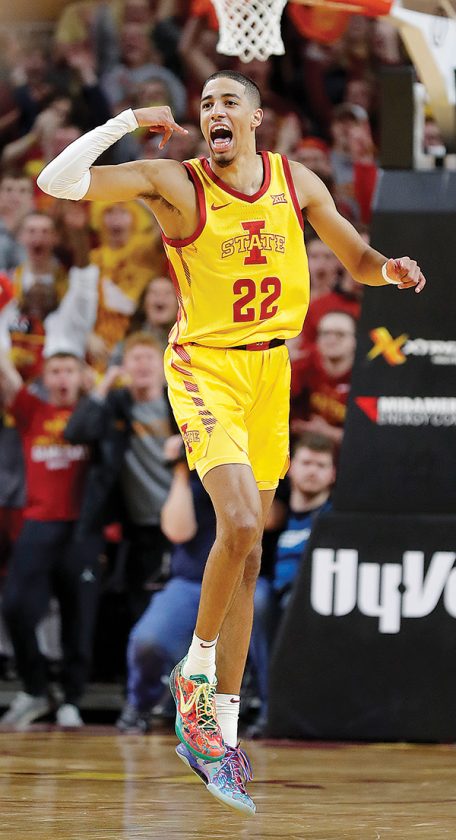 AMES — Iowa State’s star guard is going to the NBA.

Sophomore Tyrese Haliburton declared for the NBA Draft on Tuesday morning, first confirming the news to ESPN’s Adrian Wojnarowski and the Ames Tribune’s Travis Hines before posting a video on Twitter thanking Iowa State fans and head coach Steve Prohm for their support.

“I want to thank God, Coach Prohm and his staff for believing in me when nobody else did,” Haliburton said. “The trust they have put in me these last two years has made me the player I am today, but the relationships I’ve made with everybody have made me the person I am today.

“To Cyclone Nation, thank you. Playing at Hilton Coliseum in front of all you guys every night was a dream come true,” Haliburton added. “Coming to Iowa State was the best decision I’ve made in my whole life. There is no doubt in my mind you are the best fans in the country, and I can’t thank you all enough for the last two years.

“After talking with my family, we have decided that it is in my best interest to declare for the 2020 NBA Draft. Once a Cyclone, Always a Cyclone.”

ESPN and Draft Express have listed the Oshkosh, Wisconsin, native as the No. 7 overall prospect ahead of the 2020 NBA Draft — a draft in which the pre-draft process is seriously in limbo due to COVID-19 concerns.

In the Iowa State release, coach Prohm offered his thanks to Haliburton.

“We are all incredibly proud of Tyrese and all that he accomplished at Iowa State,” Prohm said. “He loves Iowa State and will always be a significant part of our Cyclone family. Tyrese, as well as his parents John and Brenda, have been outstanding ambassadors for this university and we are incredibly fortunate to have had them as part of our program.

“When Tyrese suffered his injury in February, he poured his energy into supporting his teammates and that speaks volumes about him as a person. I wish all of them the very best and know that Tyrese will be very successful. I think I speak for everyone associated with our program when I say we can’t wait to watch his career.”