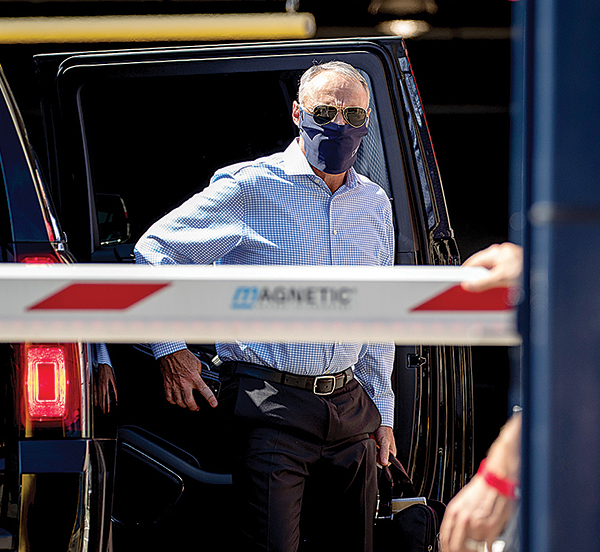 AP PHOTO - MLB Commissioner Rob Manfred arrives at Nationals Park for the Opening Day game between the New York Yankees and the Washington Nationals on July 23 in Washington.

Manfred and Clark talked about what needs to be done to finish the season, a person familiar with the conversation said. The person who spoke to The Associated Press on condition of anonymity because of the sensitivity of the situation.

“Every player in this league better take a hard look at what you’re doing off the field, because what you do affects, more than just you and your team,” Chicago Cubs outfielder Steven Souza Jr. tweeted, hours after the St. Louis-Milwaukee game was called off. “Your decisions off the field will put all of our seasons in jeopardy this year.”

The conversation between Manfred and Clark, first reported by ESPN, comes amid growing evidence that the spread of infection threatens to overtake efforts to play ball.

“Some things aren’t looking too good right now, but we have to play up to that point. Players are seeing what can happen,” Houston manager Dusty Baker said.

“The rest now is up to us and the virus,” he said.

Concerns have been expressed about lax behavior by players on the field — such as spitting or high-fives — and off. The scrambled schedule has also heightened doubts about whether the owners’ desire to play is realistic.

“Obviously, we saw the message. They sent a memo. Just be more diligent, wear a mask in the dugout when you’re not playing, what we’ve thought to be the rules all along,” Arizona catcher Stephen Vogt said. “So it’s just like every other rule that MLB has for players — now it’s going to be enforced, so to speak. Just strongly encouraging.”

“Everything gets a little bit lax when you get in the game because the habits of what we’ve been doing our whole life takes over. When one of your teammates gets a big hit, you want to high-five them. You want to celebrate the way you’ve always done,” he said. “And the last thing I want to do when I’m trying to play and do my job is be worried about COVID, but that’s the times were in right now.”

The latest game to be postponed was Milwaukee’s home opener against St. Louis, scrapped hours before the first pitch after two Cardinals players tested positive for COVID-19.

“TV Show suggestions please,” tweeted Cardinals pitcher Jack Flaherty, one of an increasing number of players who found themselves with unexpected free time as the postponements mounted.

The Cardinals said in a statement they learned Thursday night about positive tests from samples collected Wednesday. Players and staff were instructed to isolate in their hotel rooms.

“The team is currently conducting rapid testing of the entire traveling party, has implemented contact tracing, and will continue to self-isolate,” the Cardinals said.

The Cardinals and Brewers still hoped to play Saturday night, and to make up Friday’s game with a pair of seven-inning games Sunday under a newly approved MLB plan for doubleheaders.

“We’re all committed, I believe – and I’ve talked to a number of players today – to finishing the season,” Attanasio said. “Insofar as we can continue to provide some enjoyment for our fans, I think that’s something we’re all committed to doing. … If we’re not smart and safe, then we’ll fail. But we’re doing everything we can not to fail.”

Two weekend series — Nationals at Marlins, and Blue Jays at Phillies — were called off earlier. The Marlins were hit with a virus outbreak in Philadelphia that infected at least 20 members of their traveling party, and both Miami and the Phillies are sidelined for at least a week.

The schedules of the New York Yankees and Baltimore Orioles have also been scrambled a week into a season that had already been delayed and curtailed because of the pandemic, and now may be in jeopardy.

Cleveland players and staff talked about postponing Friday night’s game at Minnesota. The Cardinals had played at Target Field on Wednesday, a day before the Indians arrived.

“We just visited with everybody and just asked them to kind of visit amongst themselves and we would have more information as the day progressed. We met again at 3:30, I think, and it was a go,” Indians manager Terry Francona said.

Teams all around the majors are keeping tabs on the daily developments.

“That’s a concern of mine,” said Colorado Rockies outfielder Charlie Blackmon, who was out with the virus earlier. “I speak for the entire Rockies team — we want to go out and play. … Anything that pops up negatively, in terms of this virus situation, could hinder that. So yeah, I’m concerned. I would rather not see any more positive cases.”

“I don’t think there’s a person that thought that this would be seamless,” Blue Jays general manager Ross Atkins said. “We are being as safe as we possibly can, but we also understand that this virus is very strong and doesn’t have borders.”

For the week ending Thursday, MLB said there were 29 positive tests, a rate of 0.2%. Aside from the Marlins, there were eight positive tests for the 29 other teams, only two involved major league players.

The Marlins received another positive test result, a person familiar with the situation said, and at least 18 of their players have been infected.

The person, who spoke to the AP on condition of anonymity because no announcement had been made, said none of the Marlins has shown serious symptoms. But officials were concerned that the latest positive test result came five days after the team was last together and played its most recent game.

The person said the infected Marlins left Philadelphia in sleeper buses Friday for an 18-hour trip to Miami, where they will remain together in quarantine.

The rest of the team will spend the weekend in isolation in Philadelphia, where the Marlins have been stranded since their outbreak began. It’s uncertain when or where they will next play.

The Phillies have also been idle since Sunday. One Phils coach and two clubhouse workers tested positive this week, but the team received no positive results Friday.

Fans rooted for baseball to keep going, as did some businesses. In Milwaukee, J&B’s Blue Ribbon Bar and Grill was hoping for one of its biggest crowds since the pandemic began, with customers watching the home opener as it was played down the street.

“Really depressing,” Bliesner said. “Not happy at all.”