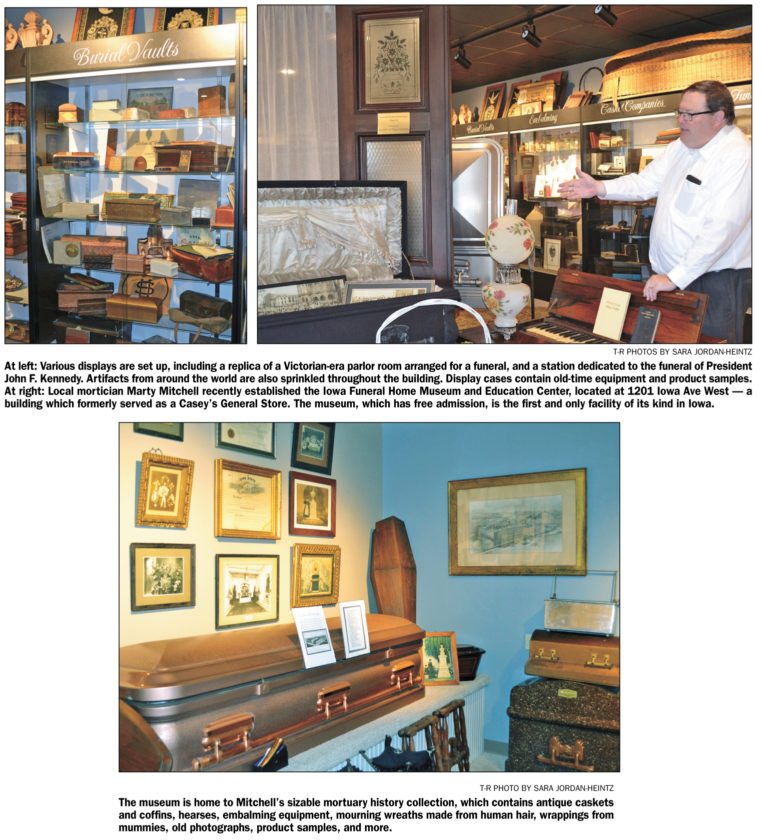 “It’s a transparent portrayal of what our business has done since Iowa has been a state.”

These are the words of Marty Mitchell, who recently established the Iowa Funeral Home Museum and Education Center — the first and only facility of its kind in Iowa.

Mitchell began his full-time career as a mortician back in 1987, when he was employed at the former Estel-Perrin Funeral Home. He owns and operates Mitchell Family Funeral, located at 1209 Iowa Ave West in Marshalltown. In December 2016, he purchased a Casey’s General Store (which had closed down when a new one opened nearby), on adjoining property at 1201 Iowa Ave West, with the intention of using the building to expand his business.

“The first intention was to use the building as an eating area for our clients,” Mitchell said.

But upon further evaluation, he decided to use the space to showcase his sizable collection of mortuary artifacts. Over the course of about six months, massive renovating transformed the Casey’s into a mortuary museum.

In the span of 30 years, the mortician has amassed a collection of over 5,000 items, ranging from antique caskets and coffins, hearses, embalming equipment, mourning wreaths made from human hair, wrappings from mummies, old photographs, product samples, and more — many pieces on display in the museum.

Admission is free of charge, and complimentary tours are offered, by appointment.

Various displays are set up, including a replica of a Victorian-era parlor room arranged for a funeral, and a station dedicated to the funeral of President John F. Kennedy, complete with the same model mahogany casket used to inter the slain president. Artifacts from around the world are also sprinkled throughout the building. Display cases contain old-time embalming fluids and equipment, and casket and burial vault samples. There is an area devoted specifically to the history of Iowa funeral homes.

“This is a business people are inquisitive about, but people usually don’t ask me questions about it until they have to,” Mitchell said. “I want this museum to be a safe environment and a place where people can pursue knowledge.”

A special conference room in the museum will serve two purposes.

“I will teach free continuing education classes in mortuary science there, and allow for the space to be used for free by groups and clubs for meetings,” Mitchell explained.

He said that space had previously been used as Casey’s kitchen area. He named the room “Shirley’s Corner” in honor of his friend and Casey’s employee Shirley Dent.

“There’s a special connection there. We had staff run over to Casey’s several times a day,” Mitchell said.

The property will also allow for more parking space to accomodate any overflow from the funeral home. In addition, the building provides much needed storage space.

“I didn’t want this museum to be about me. It’s about the men and women dedicated to this profession — everybody as a group who makes [the process of] saying goodbye to somebody happen,” Mitchell concluded.