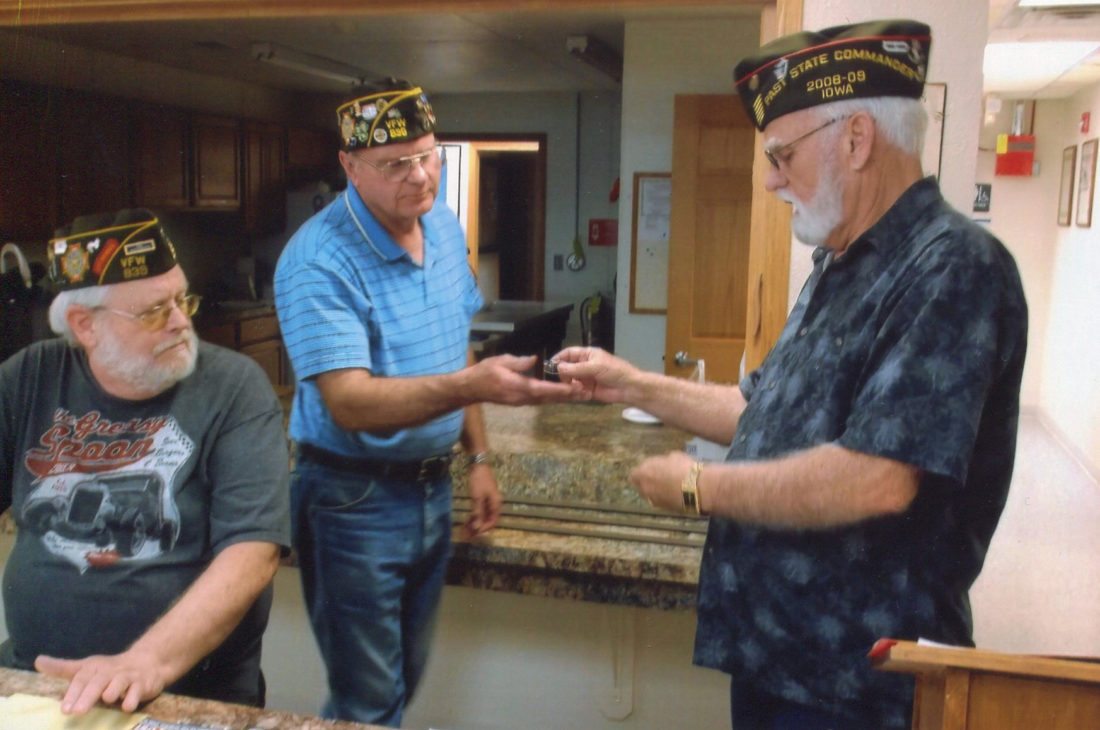 Larry Larson, for the sixth year in various terms, is back as commander of Marshalltown Veterans of Foreign Wars Post 839. He presided over the Harry C. Harter Post meeting Tuesday.

A variety of business topics came before the 22 members in attendance, including building roof repairs and insurance program, Buddy Poppy days, computer software, a garage sale and other items.

Larson, a Vietnam War Navy veteran, last served as Post 839 commander in the 2014-15 term, and succeeds Dallas Clark for the current 2017-18 term. Larson and staff had earlier been installed by Laurel Phipps, like Larson a previous post and Iowa Department commander.

Concerning the VFW building at 107 E. Meadow Lane, Larson reported on an outside firm’s bid to repair the damaged roof. Membership voted to take bids locally for 30 days before deciding on the final bid acceptance. Building and bus insurance were also topics.

The Post Charter was draped during the meeting in honor of Richard Stevenson.

Larson and Dirks led discussion on maintaining software for the post’s computer system. Future program will provide a method whereby veterans can obtain the password permitting VFW login access from their personal equipment.

Johnson explained plans for publicizing recruitment efforts in behalf of young veterans qualified for becoming VFW members. He also suggested the local post establish a “Coffee With Cops” project, for which the Post Auxiliary could cooperate with coffee and rolls.

Johnson also reminded about the veterans’ annual participation in the Iowa State Fair Veterans Parade, this year set for 11 a.m. Aug 14. He reviewed plans for the July 29 VFW Garage Sale, with items (excluding clothing and bedding items) donated by the public for 10 a.m. to 2 p.m. on July 19 and 20, also from 4 to 8 p.m. on July 27.

In other business, Larson reported that in the future VFW post doors will remain unlocked from 10 a.m. to 3 p.m. each Tuesday, Wednesday and Thursday with volunteers to be available. He noted that grateful response has come from World War II Museum officials for donations received from Marshalltown. The 118th National VFW Convention is being held in New Orleans July 22-26.

Jeff Heiden led discussion on the coming Buddy Poppies Days project in September, with details to be finalized during the Aug. 15 Post 839 meeting.

Also taking roles during the meeting were Dirks, quartermaster’s report; Heiden, acting guard; Bacino, roll call and minutes; and Pitzen, chaplains prayers. Bob and Delores Popp closed the meeting by presenting a Good For The Order video “You Traded All Your Tomorrows” by Terry Smith featuring five national cemeteries.