Film on Breslin and Hamill shows perils of local journalism 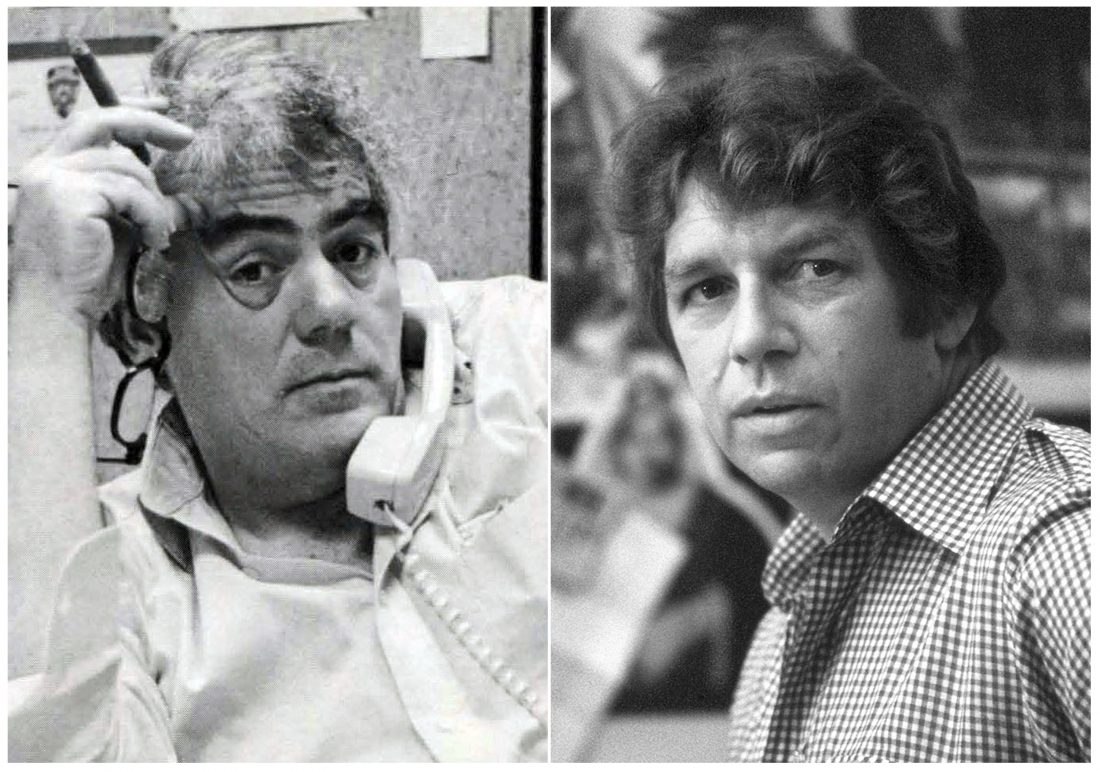 Brian Hamill/HBO via AP - This combination photo of images released by HBO shows journalists Jimmy Breslin, left, and Pete Hamill who are the focus of the HBO documentary “Breslin and Hamill: Deadline Artists,” premiering on Jan. 28.

NEW YORK — HBO’s new film on newspaper columnists Jimmy Breslin and Pete Hamill romanticizes an era in New York and journalism that feels like a long, long time ago.

The two men embodied a time when New York was a rollicking and complicated place, and each lived for the streets and stories of the little guys who made the city run. Every city had their own Breslins or Hamills, who made the powerful tremble or shake their fists. Their newspapers were required reading.

Toward the end of the documentary, which premieres Monday at 8 p.m. ET, filmmakers unspool a statistic that shocks. In 1988, the New York Daily News, the tabloid both Breslin and Hamill called home at times, had 400 reporters and editors. Thirty years later, that number was 45.

That, too, is a story replicated across the country, where local journalism is in crisis. The media industry continues to implode, where this week alone more than 1,000 journalism jobs were lost in layoffs announced by Gannett, Verizon Media and BuzzFeed.

All of this was on the mind of director Jonathan Alter, who started in 2015 to bring a camera to periodic get-togethers where Breslin and Hammill talked about the old times. Breslin died at age 88 in 2017. Hamill, fighting his own health issues, is 83 and lives in Brooklyn.

“I knew that an era was coming to a close,” Alter said, “but I also knew that we didn’t want to make a nostalgia film. We wanted it to be gritty and funny.”

Breslin made his name first, mostly through hustle. He broke from the pack to find memorable stories, notably following President John F. Kennedy’s assassination in 1963. Breslin found the man whose job was to dig Kennedy’s grave and wrote about him, and interviewed Kennedy’s emergency room doctor for a you-are-there account of the president’s final minutes.

“Jimmy was more like a hustler,” Alter said. “As someone once described it, he was right at you all the time. Pete was more like a poet … They both believed that the worst crime in the world was to be boring.”

Their jobs often brought them to painful intersections of race and class — big stories where a seemingly mild-mannered white man, Bernhard Goetz, shot four black teen-agers in 1984 during an attempted subway mugging, and when five minorities were wrongfully accused of an attack on a white jogger in Central Park in 1989.

The columnists’ willingness to listen to, and champion when necessary, people that society found easy to condemn often put them at odds with authorities. Breslin was not always a hero to a police force populated largely by fellow Irishmen. Director Spike Lee and others speak in the film about their importance to minority communities.

Hamill, who brushed off the broken hips and regular dialysis that keeps him close to home these days (“there are people in a lot worse shape than I’m in”), told The Associated Press what he and Breslin thought was necessary to cover a city of immigrants.

To do that, he said, “you’ve got to go to the third floor loft and knock on the door.”

There’s an importance to the social fabric in having exceptionally talented people write about the lives of normal folks, Alter said. It often seems like the working class is now missing from a modern New York. More likely, it’s because few people with powerful platforms are writing about them.

It’s striking to see the film catch a tenderness between two men who climbed to the top of a business fraught with egos and infighting. That’s a testament to Hamill; the brawling Breslin would often write about people with whom he was feuding.

“He knew that I was not ever trying to hurt him or conquer him,” Hamill said. “We didn’t have a sense of rivalry. I was just trying to be the best Pete Hamill, which was hard enough.”

Breslin fought through personal tragedies: he witnessed his mother try to commit suicide, and both his first wife and two daughters predeceased him. Despite a happy second marriage to a former New York City councilwoman, Ronnie Eldridge, the toll seemed evident in his final years.

Ah, but the glory years? They had their fun. Hamill dated former first lady Jacqueline Kennedy Onassis and actress Shirley MacLaine — at the same time. Breslin filmed a beer commercial and ran for New York City Council president on a ticket with writer and mayoral candidate Norman Mailer.

Newsrooms used to be loud places to work, full of colorful people happy to take you down a notch if you became self-important. Hamill recalled the editor who approached him as he was mid-column to ask if there was anything he was writing that would embarrass him if he dropped dead.

“There was this constant ‘truth to power’ quality to their work,” Alter said. “Do we still have that? Yes, at the national level.”

But not necessarily at the local level. And it’s there, at the city halls and statehouses, where your pockets get picked, columnist Richard Cohen explains in the film. Hamill, who works with students at New York University, said he knows that there are talented young people who want to do the type of reporting that he and Breslin once did.

Whether they get that chance is a question that “Deadline Artists” can’t answer.