Marlon James shares truths though the fantasy of new novel 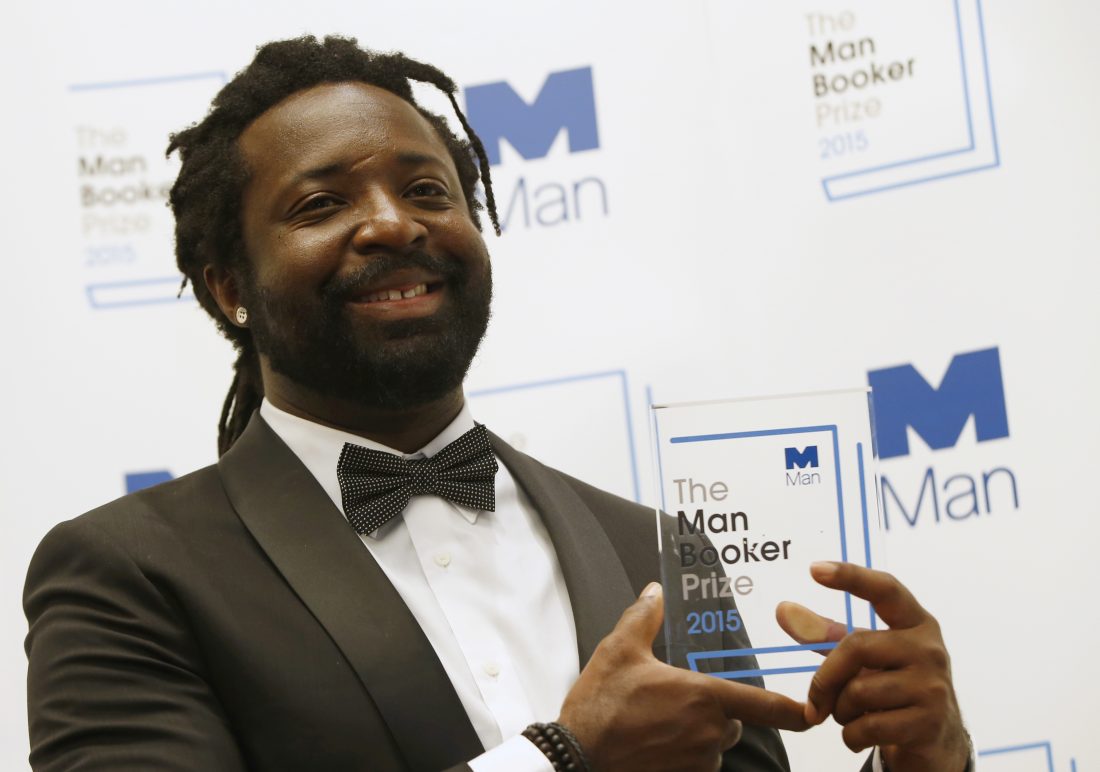 FILE - In this Oct. 13, 2015 file photo, Jamaican author Marlon James poses with the award after his book "A Brief History of Seven Killings," was named as winner of the 2015 Booker Prize 2015 for Fiction in London. Author of four novels, the 48-year-old James has made an art of “finding what would rather stay lost,” as he writes in his new work, “Black Leopard, Red Wolf.” (AP Photo/Alastair Grant, File)

NEW YORK — Marlon James is in search of a definition.

“Myths are so suffused with monsters. It makes me think of the Latin root of monsters, ‘monstrum. What does ‘monstrum’ mean?” the novelist asks, seated at a Brooklyn coffee house, briefly forgetting the meaning before looking it up in a novel he’s been reading. “Ah! ‘Monstrum is a divine messenger of catastrophe.’ A monster is a harbinger.”

Author of four novels, notably the Booker Prize-winning “A Brief History of Seven Killings,” the 48-year-old James has made an art of “finding what would rather stay lost,” as he writes in his new work, “Black Leopard, Red Wolf.” He has unearthed monsters everywhere from a colonial era plantation to the house of Bob Marley. His current book is a fantastical vision of ancient Africa that has been likened to “Game of Thrones” and is the first of a planned “Dark Star” trilogy. “Black Leopard, Red Wolf” features a hunter for hire named Tracker whose pursuit of a missing boy extends over 600 pages of warfare, sex, shape shifting and plotting in a landscape filled with monsters and witches and ever taller tales.

The novel’s digressive path, with detours becoming main roads and main roads detours, mirrors the writing of it. A James novel is a work in progress to the very end. He might write hundreds of pages before one character’s voice so compels him that he starts all over. For “A Brief History,” he says, the first words he wrote ended up on page 458. For “Black Leopard,” he had planned a story of the fall of a royal house, and its mad queen. But once he “stumbled” upon the character he came to call “Tracker,” a new narrative was born.

“Not every story appears to you ‘A to Z,'” he explains. “Sometimes Q shows up first.”

James is deeply troubled by the world as it enters the third year of the Trump administration, but also considers himself a fortunate man, whether it’s being able to live openly gay or write at a time when a so-called “literary” author can freely take on fantasy or other genres. His novel, published this week, has been getting the kinds of reviews that prize judges remember. The Washington Post called it “an African fantasy as vibrant, complex and haunting as any Western mythology” and The New York Times predicted his characters would “take their place in the pantheon of memorable and fantastical superheroes.

James’ editor at Riverhead Books, Jake Morrissey, cites the author’s “unwillingness to give the readers what they expect.” Every James book is a break from the previous one — he debuted with “John Crow’s Devil,” a 200-page parable (likely the shortest novel he will ever write and his only one told in the third person) about rival ministers in a 1950s Jamaican village; his second was the 400-page slave story “The Book of Night Women,” followed by “A Brief History,” his 700-page panorama of the attempted 1976 assassination of Marley. He sees “Black Leopard, Red Wolf” as a fitting testament for a moment which demands a close look at the past.

“I’ve always thought we go back to the myths when we want answers,” he says. “If you look at Tolkien, ‘Lord of the Rings,’ this came after World War I, they’re trying to understand how human beings could have that depth of cruelty to other humans. … The only way they could process it is to bring in mythical beasts.”

Victor LaValle, whose books range from the story collection “Slapboxing With Jesus” to the horror novel “The Changeling,” told The Associated Press in a recent email that genres such as horror and fantasy allow authors to “talk about the present in ways that are more illustrative that strict realism can often pull off. Sometimes you have to tell a story that’s bigger than life if you want to capture reality. Especially the reality we are all living in today.”

James, a Kingston native who now divides his time between Brooklyn and Minneapolis, had tried to complete other novels before “John Crow’s Devil,” which was rejected by dozens of publishers but eventually taken on by Akashic Books. He remembers starting “Book of Night Women” in the third person( “Queen’s English,” he says) but found it “too stilted.” The novel’s eventual narrator, the child of a conflicted Jamaican slave named Lilith, had been “hiding out” in a previous chapter. “I started to wonder, ‘What’s her story?'” James says.

His books reflect James’ quest for unearthing the raw desires — for power, for violence, for sex — that have lived unchanged for thousands of years, and an imagination he hopes can resist the aging process. He remembered being so compulsive a storyteller as a child that during English class one day he dashed off a Jamaican version of Cinderella, discovered by his teacher, who chastised Marlon before she actually read the story and changed her mind. He happily absorbed the Shakespeare plays and other classics his teachers required, but adds that no one could talk him out of his love for the novels of Jackie Collins. He remains the kind of man who might spend his spare time reading Thomas Aquinas, or comic books.

“I resisted growing for a very long time,” he said. “I don’t think writers should grow up. You should grow up in terms of understanding people, especially women. But I think in terms of imagination you should never grow up. I always resented that it was a sign of maturity that I had to let go of fairies and fairy tales.”