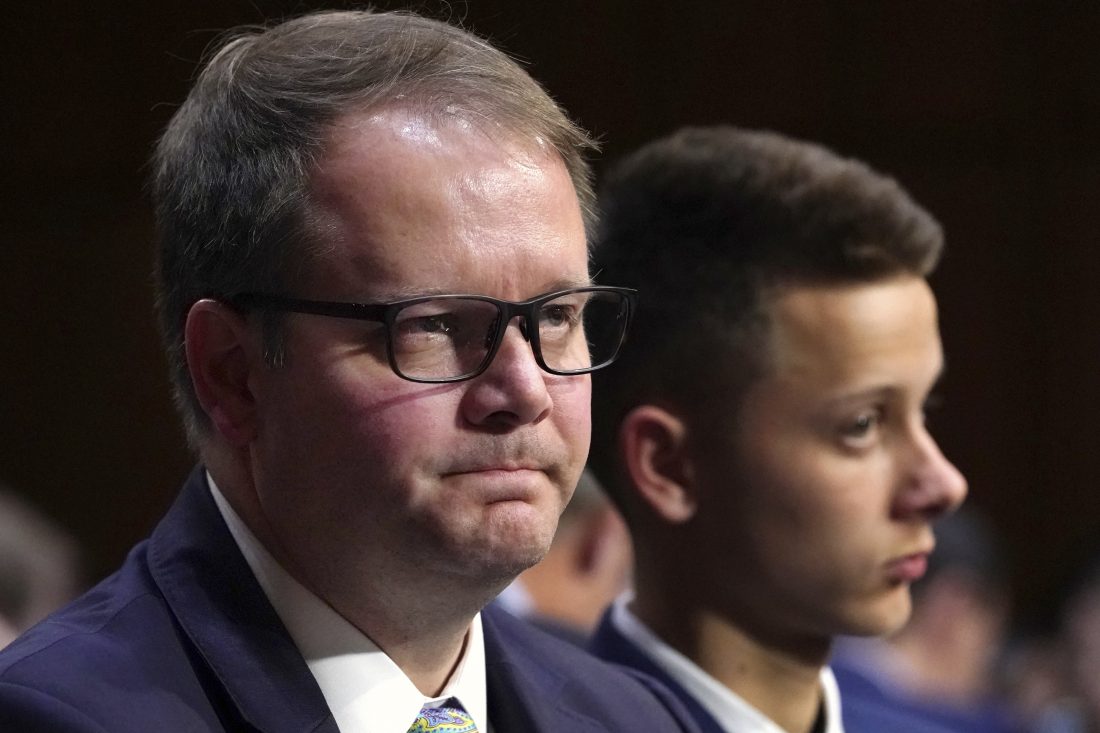 AP Photo/Jacquelyn Martin, File - Ryan Petty, left, waits to testify as he sits next to his son Patrick Petty, at a Senate Judiciary Committee hearing on the Parkland, Fla., school shootings and school safety on Capitol Hill in Washington.

PASADENA, Calif. — Two parents who lost daughters in last year’s Parkland, Florida, school shooting are calling for their local newspaper to win the Pulitzer Prize, saying the South Florida Sun Sentinel has stayed on the story to demand accountability long after the national media left.

The parents, Ryan Petty and Andrew Pollack, wrote an open letter to judges who decide the Pulitzer that was posted on the website Real Clear Education in recent days.

“If it wasn’t for them, everyone would have just moved on,” said Pollack, whose daughter Meadow was among 17 people killed at Marjorie Stoneman Douglas High School last February. Petty’s daughter Alaina was also killed.

The newspaper didn’t know about the letter ahead of time, said Julie Anderson, editor-in-chief of the Sun Sentinel who called it “very gratifying.” She said the newspaper has entered the competition for journalism’s top prize. The Pulitzers will be announced at Columbia University on April 15.

“The work by the Sun Sentinel’s reporters remind us of what journalism can and should be, and also what is being tragically lost as local newspapers downsize,” their letter said.

Petty and Pollack wrote that national news outlets focused almost exclusively on a handful of student activists who have fought for gun control legislation, turning the tragedy into another flashpoint in the culture wars.

Anderson had been at the Sun Sentinel for only two weeks when the Parkland shooting happened. She came to the newspaper from Orlando, where she was working when 49 people were killed in the 2016 shooting at the city’s Pulse nightclub. She gathered her staff in the wake of Parkland to tell them this was probably the biggest story ever in Broward County, and they needed to stick with it. They’ve done that, occasionally shifting resources around.

“It turned out to be a much harder story than we thought because there were so many roadblocks,” she said.

Authorities fought the newspaper’s attempts to delve into records and seek accountability, she said. A Nov. 30 Sun Sentinel story was headlined “Hide, deny, spin, threaten: How the school district tried to mask failures that led to Parkland shooting.”

The newspaper also reported on a “culture of leniency” in the school district that allowed students who were disciplined endless second chances. Another story revealed that Broward County’s school district reported fewer disciplinary incidents to the state than they were required to. The newspaper found that the suspect, Nikolas Cruz, had been suspended at least 67 days in middle school and more when he got to high school, until being forced out.

The school district has said it has been as transparent as it can be and that privacy laws prevented it from discussing Cruz’s school record. They also argue that discussing security in detail would make schools more dangerous, according to the Sun Sentinel.

Anderson credited the Miami Herald and CNN for helping the newspaper financially in the fight for accountability.

“We felt like we were doing it on behalf of the parents and families who just wanted to know how this happened and what we can do to prevent this from happening again,” she said.

The school district asked a judge to hold the newspaper and two of its reporters in contempt for publishing a story on an internal report about the shooting. On Friday, the newspaper filed a lawsuit seeking an emergency ruling to force the district to open to the public meetings on school safety planned for next week with parent of Marjory Stoneman Douglas students.

Pollack said he and Petty felt that what the newspaper has done deserved credit.

“Without them, a lot of this stuff doesn’t get uncovered,” he said. “I don’t know how to do this, investigative reporting. How could we, we’re parents? I can’t even count the ways that they’ve been so meaningful.”