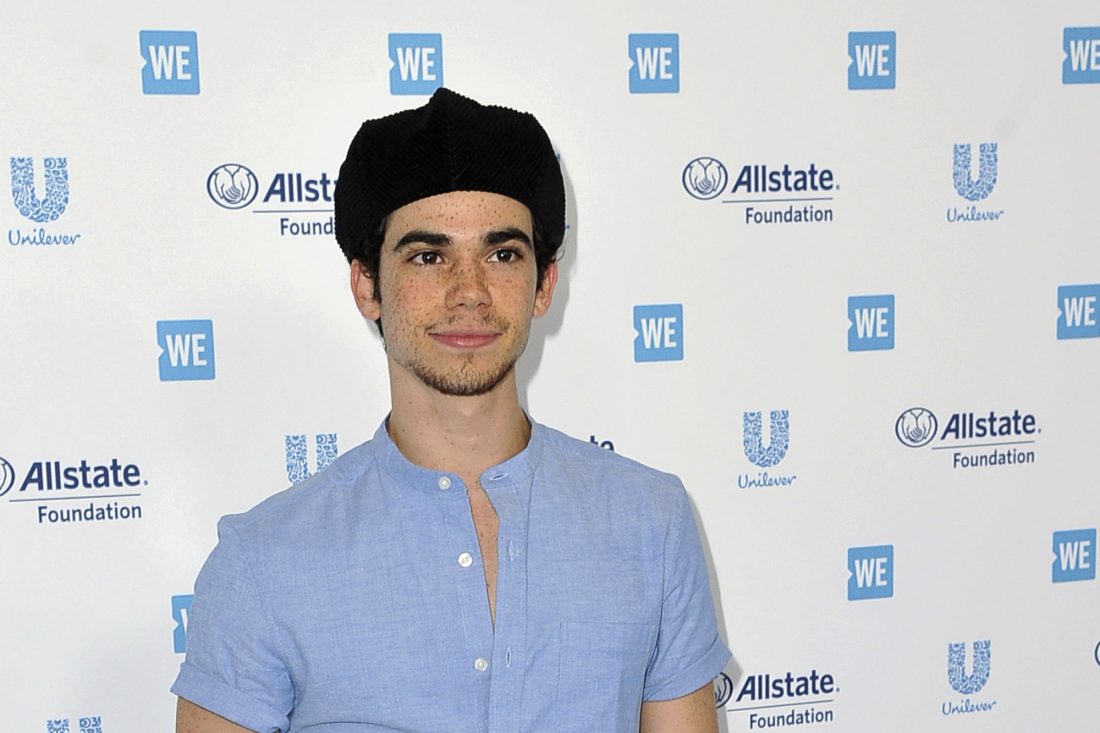 FILE - In this April 25, file photo, Cameron Boyce arrives at WE Day California at The Forum in Inglewood, Calif. Actor Cameron Boyce, known for his roles in the Disney Channel franchise “Descendants” and the Adam Sandler “Grown Ups” movies, died Saturday, July 6, 2019, at his home in Los Angeles, according to his spokesperson. He was 20. (Photo by Richard Shotwell/Invision/AP, File)

Actor Cameron Boyce, best known for his role as the teenage son of Cruella de Vil in the Disney Channel franchise “Descendants,” has died. He was 20 years old.

Boyce, who played Carlos de Vil in the “Descendants” movies, died Saturday at his home in Los Angeles, according to his spokesperson.

An official cause of death has not been announced, but his family released a statement Sunday saying Boyce “passed away in his sleep due to a seizure that was a result of an ongoing medical condition for which he was being treated.

“The world is now undoubtedly without one of its brightest lights, but his spirit will live on through the kindness and compassion of all who knew and loved him. We are utterly heartbroken,” the family statement said.

According to his bio on the Disney Channel, Boyce was born and raised in Los Angeles. He was a dancer who got his acting start in commercials, then television and film. Boyce starred alongside Adam Sandler in “Grown Ups” and “Grown Ups 2,” and other film credits include “Mirrors,” ”Eagle Eye” and the indie feature “Runt.” He also starred in the upcoming HBO series “Mrs. Fletcher.”

“Descendants 3” is scheduled for release in August.

His spokesperson said Sunday that Boyce was also a philanthropist who used his celebrity to advocate for those without a voice, including the homeless. Last year, he was honored for his work with the Thirst Project, bringing awareness to the global water crisis and raising more than $30,000 for the organization to build two wells in Eswatini, formerly known as Swaziland, in efforts to bring clean drinking water to the region.

In 2017, he received a Daytime Emmy Award with Disney XD for his participation in the series “Timeless Heroes_Be Inspired,” in honor of Black History Month. He appeared alongside his grandmother Jo Ann Boyce, one of 12 black teens known as the Clinton 12 who were the first to integrate into public school in Clinton, Tennessee, according to his Disney Channel biography.

A Disney Channel spokesperson released a statement Sunday saying that from a young age, Boyce dreamed of sharing his artistic talents with the world and was fueled by a desire to make a difference in peoples’ lives through his humanitarian work.

“He was an incredibly talented performer, a remarkably caring and thoughtful person and, above all else, he was a loving and dedicated son, brother, grandson and friend,” the statement said. “We offer our deepest condolences to his family, castmates and colleagues and join his many millions of fans in grieving his untimely passing. He will be dearly missed.”

Walt Disney Co. Chairman and Chief Executive Robert Iger tweeted Sunday: “The Walt Disney Company mourns the loss of #CameronBoyce, who was a friend to so many of us, and filled with so much talent, heart and life, and far too young to die. Our prayers go out to his family and his friends.”

Several of Boyce’s co-stars reacted to his death on social media Sunday.