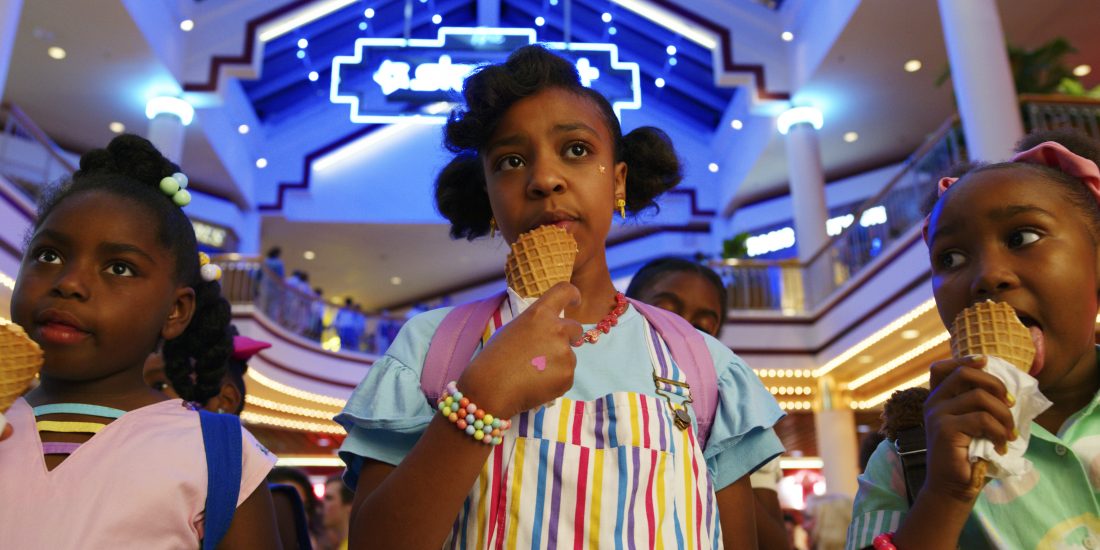 This image released by Netflix shows Priah Ferguson, center, in a scene from "Stranger Things." Ferguson, a 12-year-old Atlanta middle schooler, has given season 3 of the sci-fi, back-to-the-‘80s Netflix show a jolt of sassy electricity, playing Erica, a “My Little Pony”-obsessed, He-Man stealing, walkie-talkie intercepting little sister of Lucas, played by Caleb McLaughlin. (Netflix via AP)

NEW YORK — One of the breakout stars of “Stranger Things” is an actress who wants to do more action roles and maybe get behind the camera. But first, there’s seventh grade.

Priah Ferguson, a 12-year-old Atlanta middle schooler, has given season 3 of the sci-fi, back-to-the-’80s Netflix show a jolt of sassy electricity.

“She’s a very confident person and I’m confident,” Priah said. “She’s a leader. I’m a leader. So we have a lot of similarities.”

The actress, who previously has had minor roles on “Atlanta” and “Mercy Street,” had quick-or-you’ll-miss it moments in season 2 of “Stranger Things” but has roared into the new one with an action sequence and catchphrases like “You can’t spell America without Erica” and “Just the facts.”

She was handed a helmet fitted with flashlights and sent though the ventilation shafts of Starcourt Mall to discover what a secret group of Russians was hiding. For this, she earned her reward: “Free. Ice. Cream. For. Life.”

“I got to do like a little stunt. So I was like, ‘Wow this is something I’ve always wanted to do,'” she said. “That was cool.”

Her Erica has spunk and verve, liable to scream into a walkie-talkie: “Code red? I got a code for you instead. It’s called code shut your mouth.” Erica will not stand for nerdiness but there’s a little nerd in her, too.

Adjua Ferguson, her mother, said she and her husband recognized artistic potential in their daughter when she was just 2.

“She was an expressive baby– she always had the most unique expressions and reactions. She always had an old soul. She would just respond to things beyond her years, very conversational,” she said. “From there, people kept saying she had something special.”

Priah hopes to continue acting and maybe direct one day as well. But staying a kid is also a goal. She’s not planning to return to her school’s drama club this fall.

“I want to separate my acting from school. It just got to be a little too much,” she said. “It’s just too much drama.”

She’s taking that message across the country, teaming up with applesauce and yogurt-pouch maker GoGo squeeZ to encourage kids to put aside their devices and embrace unstructured play as part of the “BE Time” initiative.

“I love having free time to stay off my phone, even though I love my phone,” she said. “At times it can just be draining. You just need a time to really see the real world.”