2 Dillinger relatives doubt body in grave is the gangster 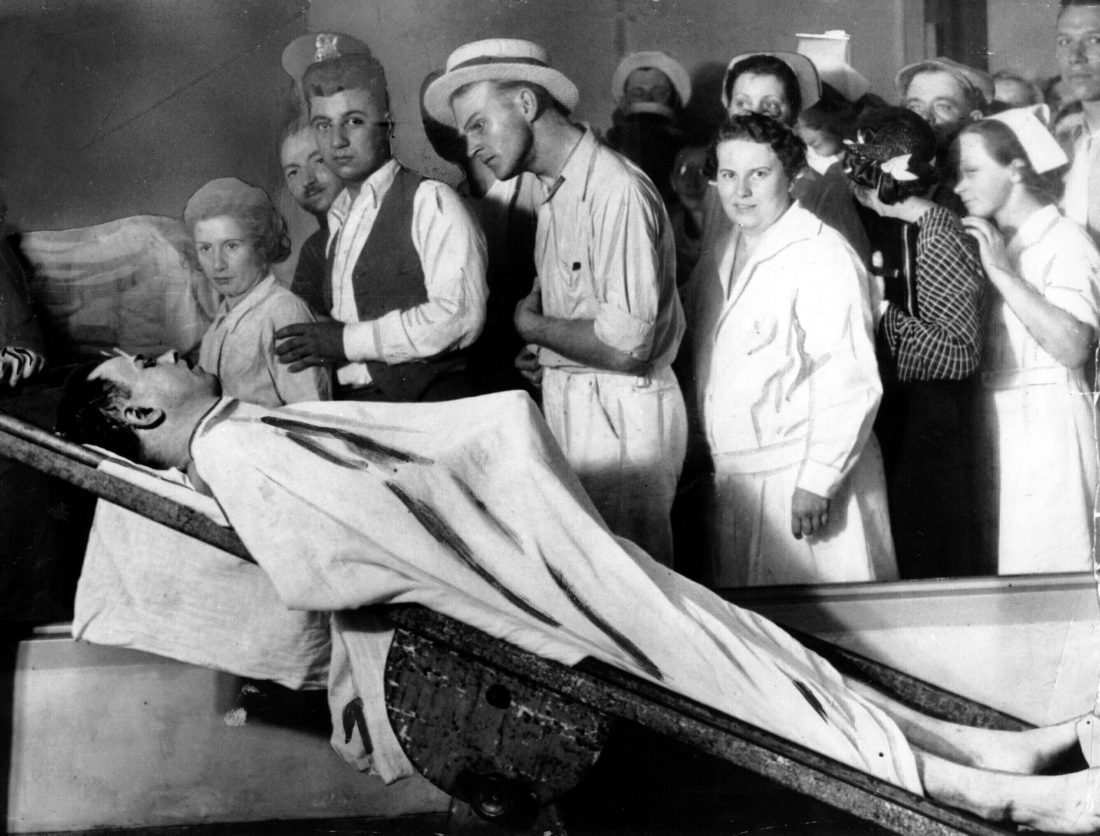 In this July 1934 file photo, people view the body of gangster John Dillinger in a Chicago morgue. Two relatives of notorious 1930s gangster John Dillinger who plan to have his remains exhumed say they have "evidence" the body buried in an Indianapolis cemetery beneath a gravestone bearing his name may not be him and that FBI agents possibly killed someone else in 1934. (AP Photo/File)

INDIANAPOLIS — Two relatives of notorious 1930s gangster John Dillinger who plan to have his remains exhumed as part of a television documentary say they have “evidence” the body buried in an Indianapolis cemetery may not be him and that FBI agents possibly killed someone else in 1934.

The FBI immediately disputed that idea, calling it a “myth” that its agents didn’t fatally shoot Dillinger outside a Chicago theater more than 85 years ago. The agency said in a statement that “a wealth of information supports Dillinger’s demise” including fingerprint matches.

But in affidavits released by the Indiana State Department of Health, two relatives of the famed criminal say they’re seeking to have “a body purported to be John H. Dillinger” exhumed from Crown Hill Cemetery for a forensic analysis and possible DNA testing.

The planned exhumation will be part of a documentary on Dillinger for The History Channel, a spokesman for A&E Networks confirmed earlier this week.

Mike Thompson and Carol Thompson Griffith, who say Dillinger was their uncle, wrote in affidavits supporting an exhumation and reburial permit the state agency approved in July that they have received “evidence that demonstrates that the individual who was shot and killed at the Biograph Theater in Chicago on July 22, 1934 may not in fact have been my uncle, John H. Dillinger.”

In their affidavits, both say that “evidence” includes that the eye color of the man killed outside that theater didn’t match Dillinger’s eye color, his ears were shaped differently, the fingerprints weren’t a match and that he had a heart condition. The document doesn’t elaborate on why the heart condition supports their theory that the man wasn’t Dillinger.

But both say they want the body exhumed and subjected to a forensic analysis and possibly DNA testing “in order to make a positive identification.”

“It is my belief and opinion that it is critical to learn whether Dillinger lived beyond his reported date of death of July 22, 1934. If he was not killed on that date, I am interested in discovering what happened to him, where he lived, whether he had children, and whether any such children or grandchildren are living today,” both say in the documents.

The Chicago Sun-Times and WLS-TV in Chicago first reported on the affidavits supporting the exhumation permit.

A&E Networks spokesman Dan Silberman said Thursday that he only learned this week about the relatives’ affidavits and their belief that Dillinger might not be buried in the grave.

He said he can’t comment on the planned documentary or what the film’s focus will be because the project hasn’t gone into production yet.

“It’s really early in the process,” Silberman said. “In documentaries, it’s not like there’s a script, so it’s hard to say at this point.”

He said no date has been scheduled for the exhumation and approvals are still needed from other government entities. Silberman said he did not know if Dillinger’s relatives would be paid by the network as part of the documentary.

The FBI took the unusual step of issuing a statement late Wednesday insisting that its agents had in fact shot and killed Dillinger “as he reached for a pistol from his trouser pocket” outside the theater.

The FBI said Dillinger was pronounced dead at a Chicago hospital. The agency also said that it’s a “common myth” that “a stand-in” and not Dillinger was the man killed, saying that such claims “have been advanced with only circumstantial evidence.”

Another Dillinger relative said he considers the planned exhumation to be disrespectful. Great-nephew Jeff Scalf tells WTHR-TV that he’s certain the late gangster is buried in the concrete-encased grave that’s marked with his name at the cemetery.

“I don’t believe in desecrating the dead. I think it’s been 85 years. It doesn’t matter,” Scalf told the Indianapolis station.

“Unless somebody was successful in robbing the grave, that’s John. I know that that’s John,” added Scalf, who’s a cousin of Mike Thompson, one of the relatives who sought the state permit.

The Indianapolis-born Dillinger, who was portrayed by Johnny Depp in the 2009 movie “Public Enemies,” was one of America’s most notorious criminals. The FBI says Dillinger’s gang killed 10 people as they pulled off a bloody string of bank robberies across the Midwest in the 1930s.

Dillinger was considered a folk hero by some during the Great Depression, when banks foreclosed on homes and farms amid the economic crisis, said Susan Sutton, a historian with the Indiana Historical Society.

Dillinger was awaiting trial in the slaying of an East Chicago police officer when he escaped from jail in Crown Point, Indiana, in March 1934 with a gun carved out of wood. While on the run, he underwent plastic surgery to alter his face and was said to have tried to remove his fingerprints with acid.