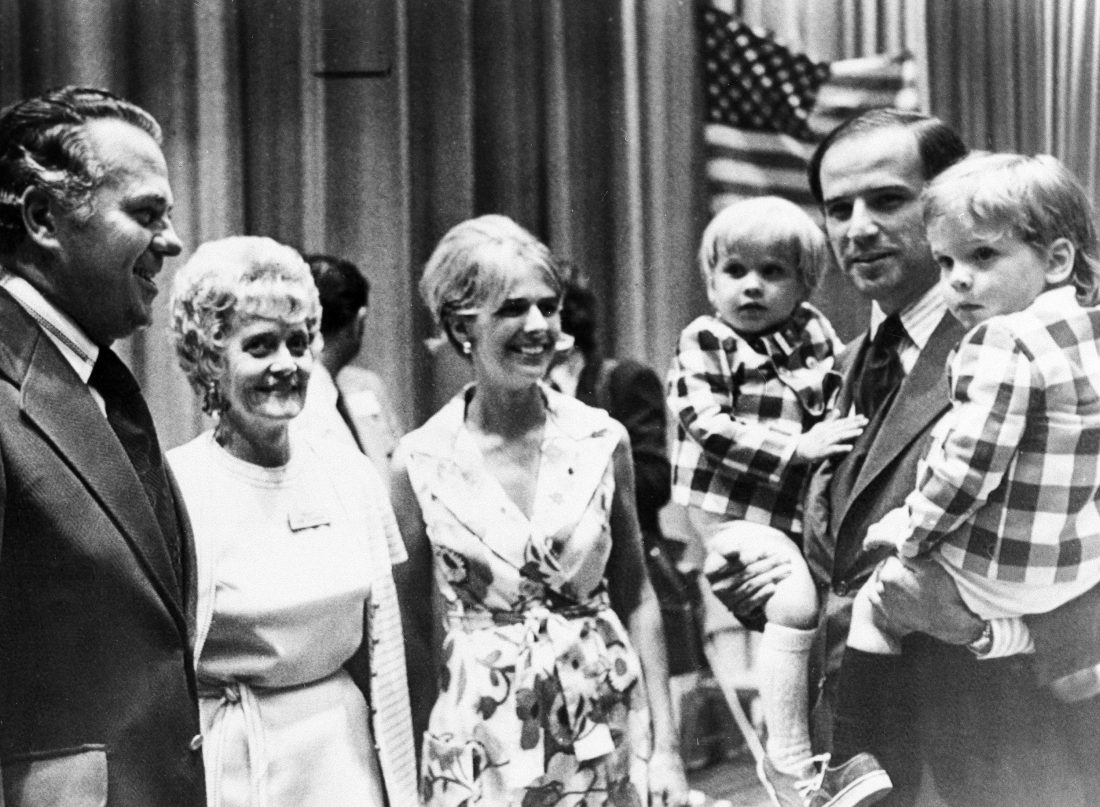 FILE - In this summer 1972 file photo, Joe Biden, carries both of his sons, Joseph, left, and Robert during an appearance at the Democratic state convention At center is his wife Neilia Biden, who was killed in an auto crash, Dec. 20, 1972. With them are Gov.-elect Sherman W. Tribbitt and his wife, Jeanne. (AP Photo)

WASHINGTON — On the night before Joe Biden’s world collapsed, he sat in a picture-perfect scene with his wife by the fireside in their Delaware living room.

Biden, the hotshot senator-elect at just 30, was reflecting on the big things he would do when he got to Washington. It was one week out from Christmas in 1972, and Neilia, also 30, was addressing holiday cards as her husband rambled on. But then she interrupted his musings to share an ill premonition.

“What’s going to happen, Joey?” she asked her husband, in Biden’s later recounting. “Things are too good.”

One day later, Neilia and the couple’s 13-month old daughter, Naomi, were dead. Sons Hunter and Beau, a year and a day apart at 3 and 4, were seriously injured.

While Biden was in Washington setting up his new office, Neilia’s car had been broadsided by a tractor-trailer as she took the kids to pick out a Christmas tree.

When the phone rang, Biden said later, “I knew.”

“You just felt it in your bones.”

Nothing would ever be the same. Biden was instantly transformed into a politician whose career would forever be grounded in tragedy. Loss became central to Biden’s political persona, a history he has often shared — at some points reluctantly, at others readily and on at least a few occasions with inaccuracies in the account. Now in his third bid for the White House, the painful story comes up as point of connection to voters and a personal experience on health care policy.

But Biden confidants say the history is much more than that. It’s essential to explaining the candidate’s inclination to give others, even political opponents, the benefit of the doubt. Surmounting loss helped to shape a determination to overcome hard things that friends see reflected in Biden’s recent talk about the need to work even with those “who may offend every fiber of your being,” and in his can-do attitude toward world trouble spots.

As it turned out, Biden’s passage through hardship was not to be a one-time journey but a well-traveled path. His life was later rocked by serious illness, political setbacks, and, in 2015, Beau’s death from brain cancer at age 46. There were other, less public, trials, including Hunter’s struggles as an adult with addiction.

Despite life’s cruelties, though, Biden remarried, added daughter Ashley to his family, spent 26 years in the Senate, eight as vice president and pursued the presidency off and on for more than three decades. He’s now making another run at age 76.

After the accident, Biden had no interest in the Senate anymore. No ambition for anything, really. His world view shrank to taking care of his boys.

“For the first time in my life, I understood how someone could consciously decide to commit suicide,” he would later reveal.

Biden didn’t just have to deal with grief. He had the added burden of processing it in public.

On Dec. 19, 1972, the day after Neilia’s car accident, Richard Nixon’s aides briefed the president on the tragedy, spelling out the name of the unfamiliar incoming senator “B-I-D-E-N.”

Then the White House operator patches Biden through for a condolence call.

“So uh, so the, uh, but, uh, in any event, uh, I mean, looking at it in a, as you must, in terms of the future, because you, you have the great fortune of being young,” the president tells him. “And now I’m sure that, uh, she’ll be watching you from now on.”

Biden utters a hurried thank you and ends the call.

He debated relinquishing the Senate seat he’d yet to even occupy but eventually agreed to give the job a try for six months.

Two-and-half weeks after Neilia’s death, Biden was sworn in as senator in a small chapel at the hospital in Delaware. Beau, still in traction, was wheeled into the room in his bed; Hunter, by then out of the hospital, perched on his brother’s bed for the ceremony.

Senators gave Biden broad leeway once in office. His sister Valerie moved in to take care of the boys. The new senator went home to Delaware every night to kiss them good night.

For decades to come, Biden would wrestle with the image he cut as a tragic figure and a self-described “hot commodity” on the Washington scene.

Loss became part of the Biden package. And it made for an uncomfortable fit at times.

“I am the youngest man in the Senate and I am also the victim of a tragic fate which makes me very newsworthy,” he told Washingtonian in a 1974 interview.

“I’m sure that’s why I get so many invitations all the time. I don’t accept them and people understand why.”

The conversation revealed a man still struggling with how to be in the spotlight. He at times appears boastful and also still broken. Biden shared a photo of his deceased wife in a bikini, offering that she looked “better than a Playboy bunny” and calling her “my greatest ally, my sensuous lover.” He mentioned getting Rose Kennedy dinner invitations “at least 10 times and I’ve only gone once.”

Former Sen. Bill Bradley, D-N.J., who served with Biden in the Senate for nearly two decades, says that while many a politician wrestles with hidden personal tragedies, Biden from the beginning has been open about his pain.

When people “see someone who is able to make his way through that in public, which is infinitely more difficult, they have a feeling for him as a human being,” Bradley said.