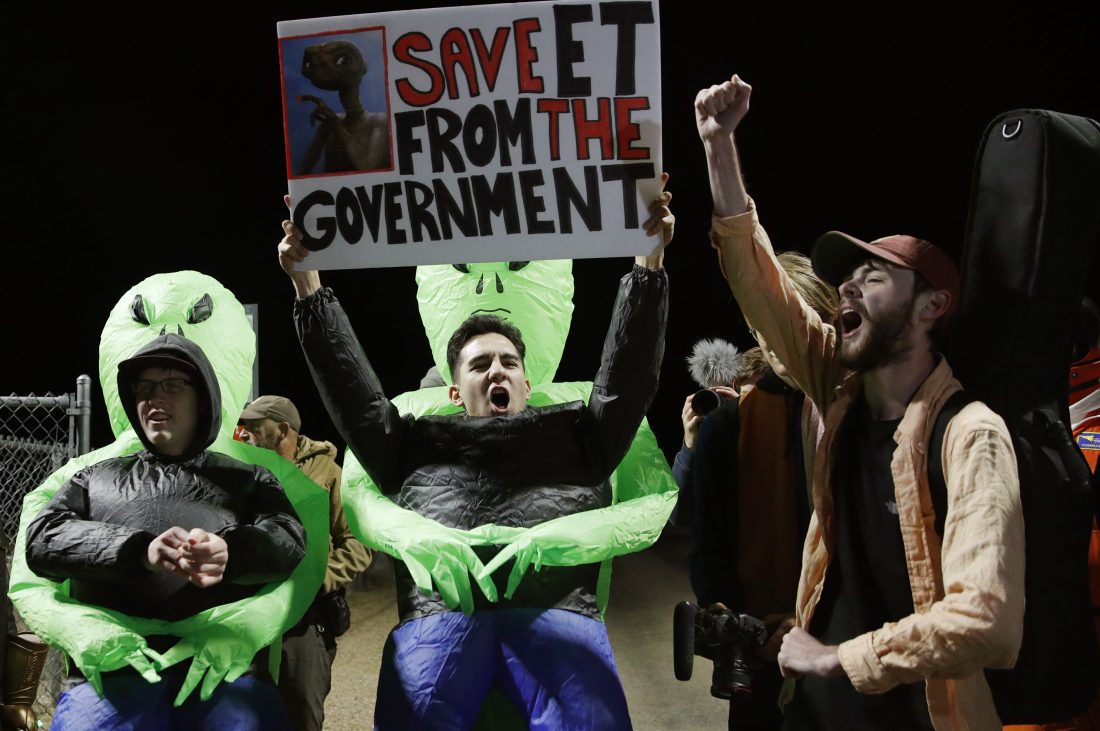 AP Photo/John Locher
Mario Rayna, center, chants with others at an entrance to the Nevada Test and Training Range near Area 51 Friday near Rachel, Nev.

HIKO, Nev. — Thousands of curious Earthlings from around the globe traveled to festivals, and several hundred made forays toward the secret Area 51 military base in the Nevada desert on Friday, drawn by an internet buzz and a social media craze sparked by a summertime Facebook post inviting people to “Storm Area 51.”

“They can’t stop all of us,” the post joked. “Lets see them aliens.”

In the end — at the appointed hour of 3 a.m. Sept. 20 — about 75 to 100 people braved chilly darkness and a bumpy, dusty 8-mile (13-kilometer) drive to the Rachel gate of the legendary former top-secret U.S. Air Force base. Another 40 traveled about 20 miles (32 kilometers) a more rugged washboard-dirt road to a different gate.

The sheriff in neighboring Nye County reported that about 40 people gathered overnight at a conspicuously green “Area 51 Alien Center” in Amargosa Valley about 3 a.m. and approached a base gate before leaving after “heated warnings” from officers.

They did find they weren’t alone, amid bright floodlights, watchful cameras and who-knows-what in a squat tan bunker building with blackout windows — all surrounded by razor wire.

Polite and patient local sheriff’s deputies ushered one woman away when she stepped too far forward. They arrested a man from Canada who urinated near the gate and cited him for indecent exposure, Lee said. The woman was released with a warning.

“We intend to keep those officers there throughout the event,” Lee told reporters Friday. “You know: Come. Look. See what you can see. But just don’t cross.”

As he spoke, a trickle of vehicles grew to a stream on a two-lane state road dubbed the Extraterrestrial Highway toward Rachel, a town of 50 residents now hosting more than 2,000 “Alienstock” campers and alien-seekers.

Another event started in Hiko, a crossroads town a 45-minute drive closer to Las Vegas.

Meanwhile, Matty Roberts, a 20-year-old from Bakersfield, California, who sparked the Area 51 phenomenon with a late-night Facebook post and then broke with Little A’Le’Inn owner Connie West over production of the Rachel event, hosted a Thursday evening event at an outdoor venue in downtown Las Vegas also using the “Alienstock” name.

“It started as a joke and now people are getting to know each other,” said Tracy Ferguson, 23, of Sioux Falls, South Dakota, who said the internet gave him the idea to drive to Nevada with his girlfriend, Jade Gore, 19, of Worthington, Minnesota.

Gore quit her job at a Dairy Queen and dyed her hair and eyebrows green. They drove through Wyoming, Utah and into Nevada with “Area 51 bound” and “Comin 4 Dem Alien Cheeks” in green paint on their car windows.

By noon they’d visited the Little A’Le’Inn in Rachel, the Alien Research Center in Hiko and the Rachel gate to Area 51. By Saturday, they’ll be in Las Vegas, a more than two-hour drive away.

“Area 51 Basecamp” in Hiko was set to feature music, speakers and movies — headlined by an electronic dance music DJ who tours the world and attracts packed clubs on the Las Vegas Strip.

Michael Ian Borer, a University of Nevada, Las Vegas, sociologist who researches pop culture and paranormal activity, called the festivities a blend of interest in aliens, the supernatural, government conspiracies and the desire to know what is unknown.

A sheriff’s deputy at the Rachel gate ticked off the countries he said visitors came from: Russia, Germany, Peru, Sweden.

Cyril Soudant, 25, of Lille, France, said he was disappointed not to see more people at the events.

Soudant took video for his YouTube channel and said he would wait until Friday night to make a final assessment on the experience.

“We all know we can’t cross the gate,” Soudant said. “But if tonight we get together, have some music, have some beers, that would be a success.”

Vincent Dahl of Stockton, California, awoke at the “Alienstock” campground in remote Nevada looking to hitch a ride to the nearest gate. John Derryberry and Sarah Shore, a couple from Nashville, Tennessee, happily obliged.

By the time they made the dusty 8-mile (13-kilometer) drive, the trio in their mid-20s were practically old friends.