Night lights at school fields across nation a ‘sign of hope’ 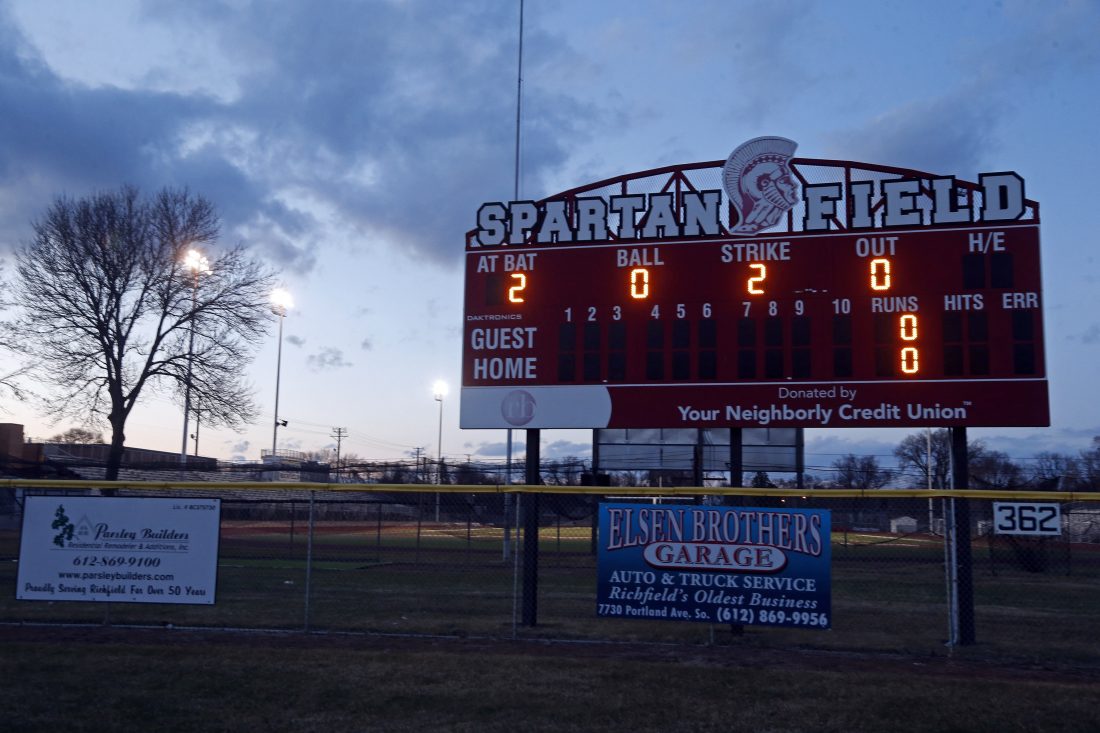 The virus outbreak weighed heavily on Brett Beesley’s heart and mind as the Dumas High School principal drove past the stadium along the main highway in his Texas Panhandle town.

Seeking to brighten the spiritsof his suddenly disconnected students in a gloomy and frightening time, he made a decision. They should turn on the lights.

“To let them know that we’re thinking about them and we miss them and we love them,” said Beesley, who quickly called football coach Aaron Dunnam with his idea.

Dunnam didn’t wait for their conversation to end before climbing into his car to head to the field and do the honors back on March 24 during the first full week of closed schools in Texas.

Nearly as fast, the symbolic act became a movement — fueled by social media with the hashtag #BeTheLight — across the country.

“I just love the focus to be on kids of this nation now,” said Beesley, who used Twitter to challenge other Texas schools to follow suit.

Dunnam’s oldest daughter, Lyssa, is the top-ranked powerlifter in Texas, a senior who likely won’t get to compete for a state title this spring. She joins her dad every night at the stadium.

“This has probably been the hardest situation I’ve had to deal with because I don’t have all the answers for her,” Dunnam said.

It’s fitting this originated in Texas, the home of the book, movie and television series “Friday Night Lights” about the windswept oilfield towns where high school football shapes both culture and community. As the author H.G. Bissinger wrote, “It could be anywhere in this vast land, where on a Friday night, a set of spindly stadium lights rises to the heavens to so powerfully, and so briefly, ignite the darkness.”

The goal was to provide a beacon for all students in the district, not just the seniors or the athletes. Leaving the lights on for an hour costs adds $25 to the electric bill, Beesley said.

“I didn’t think the taxpayer would mind too much if it meant giving our kids some hope,” he said.

Adam Bright, an assistant commissioner at the Colorado High School Activities Association, discovered the ritual on Twitter and shared the news. More than 80 schools have joined.

Christopher Noll, the athletic director for District 11 in Colorado Springs, challenged coaches, teachers and administrators to place a combined 1,000 phone calls to families simply to be supportive during the shutdown. The total for that first effort was 1,728 calls and the number was put up in glowing orange numbers on the stadium scoreboard.

“I’m a huge believer that positivity is contagious,” said Noll, who produced a 14-minute video on Monday night inside an illuminated and vacant Garry Berry Stadium in Colorado Springs.

In Minnesota, the mother of a senior lacrosse player at Centennial High School pointed out the trend in Texas to activities director Brian Jamros, who first flipped on the lights March 30 in Circle Pines, a suburb north of the Twin Cities.

“As you get older, it brings you back in time, what it means to be that student athlete representing your community,” Jamros said.