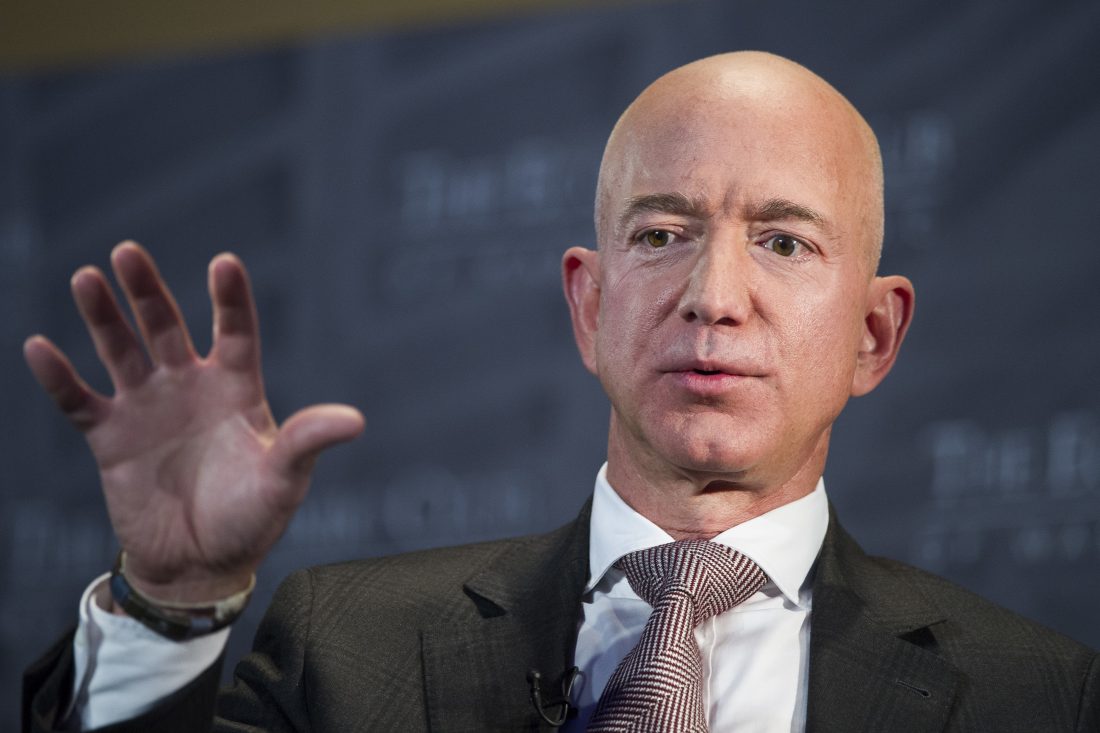 FILE- In this Sept. 13, 2018, file photo Jeff Bezos, Amazon founder and CEO, speaks at The Economic Club of Washington's Milestone Celebration in Washington. Bezos says the National Enquirer is threatening to publish nude photographs of him unless his private investigators back off the tabloid that detailed the billionaire’s extramarital affair (AP Photo/Cliff Owen, File)

LOS ANGELES — Amazon CEO Jeff Bezos said Thursday he was the target of “extortion and blackmail” by the publisher of the National Enquirer, which he said threatened to publish revealing personal photos of him unless he stopped investigating how the tabloid obtained his private exchanges with his mistress.

Bezos, who is also owner of The Washington Post, detailed his interactions with American Media Inc., or AMI, in an extraordinary blog post Thursday on Medium.com. The billionaire did not say the tabloid was seeking money — instead, he said, the Enquirer wanted him to make a public statement that the tabloid’s coverage was not politically motivated.

Bezos’ accusations add another twist to a high-profile clash between the world’s richest man and the leader of America’s best-known tabloid, a strong backer of President Donald Trump. Bezos’ investigators have suggested the Enquirer’s coverage of his affair — which included the release of risque texts — was driven by dirty politics.

“Of course I don’t want personal photos published, but I also won’t participate in their well-known practice of blackmail, political favors, political attacks, and corruption,” Bezos wrote of AMI, in explaining his decision to go public. “I prefer to stand up, roll this log over, and see what crawls out.”

A spokesman and an attorney for AMI did not immediately respond to messages seeking comment.

But the company has admitted in the past that it engaged in what’s known as “catch-and-kill” practices to help Trump become president. Trump has been highly critical of Bezos and the Post’s coverage of the White House.

The Bezos affair became public when the Enquirer published a Jan. 9 story about his relationship with Lauren Sanchez, a former TV anchor who is also married. Bezos then hired a team of private investigators to find out how the tabloid got the texts and photos the two exchanged.

Several days ago, someone at AMI told Bezos’ team that the company’s CEO David Pecker was “apoplectic” about the investigation, Bezos said. AMI later approached Bezos’ representatives with an offer.

“They said they had more of my text messages and photos that they would publish if we didn’t stop our investigation,” Bezos wrote.

Bezos wrote that this week, the tabloid’s editor, Dylan Howard, emailed an attorney for Bezos’ longtime security consultant to describe photos the Enquirer “obtained during our newsgathering.” The photos include a “below the belt selfie” of Bezos, photos of him in tight boxer-briefs and wearing only a towel, and several revealing photos of Sanchez, according to the emails Bezos released.

According to the emails, an attorney for AMI offered a formal deal Wednesday: The tabloid wouldn’t post the photos if Bezos and his investigators would release a public statement “affirming that they have no knowledge or basis” to suggest the Enquirer’s coverage was “politically motivated or influenced by political forces.”

Bezos said he decided to publish the emails sent to his team “rather than capitulate to extortion and blackmail,” despite the “personal cost and embarrassment they threaten.”

It does not appear that AMI demanded any money from Bezos — only that he call off his investigation and issue a statement saying the coverage wasn’t political.

It reported that Bezos sent “sleazy text messages and gushing love notes” to Sanchez, months before Bezos announced he was splitting up with his wife, MacKenzie. The story carries the bylines of Howard and two reporters.

But Bezos was suspicious about how the tabloid could have possibly gotten access to his private exchanges.

Bezos usually stays out of the public eye, frequently delegating announcements and public Amazon business updates to his executives. He doesn’t even speak on the company’s quarterly financial earnings call with analysts.

His personal investigators, led by his longtime security consultant, Gavin de Becker, concluded that Bezos’ phone wasn’t hacked. Instead, they’ve been focusing on Sanchez’s brother, according to a person familiar with the matter.

De Becker and his team suspect Michael Sanchez, a talent manager who touts his support of Trump and is an acquaintance of Trump allies Roger Stone and Carter Page, may have provided the information to the Enquirer, the person said. The person wasn’t authorized to discuss the matter publicly and spoke on condition of anonymity.

Sanchez, who is also his sister’s manager, has declined to speak with The Associated Press on the record and did not immediately respond to an email seeking comment Thursday. In a tweet, he said de Becker “spreads fake, unhinged conservative conspiracy theories” and “‘dog whistle’ smears.”

AMI’s relationship with Trump has gotten the company into hot water in the past. It admitted to “catch-and-kill” practices as part of a deal with federal prosecutors, who agreed to not pursue charges against the company.

AMI acknowledged secretly assisting Trump’s campaign by paying $150,000 to a Playboy model for the rights to her story about an alleged affair with the then-candidate. The company then intentionally suppressed the story until after the 2016 election.

In September, the Justice Department agreed to a non-prosecution agreement with AMI, which requires the company and some top executives, including Pecker and Howard, to cooperate with authorities.

De Becker is now trying to find a way that federal prosecutors in Manhattan — where the non-prosecution agreement was signed — could investigate the text message scandal, the person familiar with the matter said, though it wasn’t immediately clear what, if any, crime the prosecutors would be asked to look into.

It is a federal crime to threaten to injure someone’s reputation in exchange for money or a “thing of value,” though federal courts haven’t made it directly clear whether a public statement, like the one demanded by AMI, could be considered something of value.

Laurie Levenson, a former federal prosecutor and professor at Loyola Law School in Los Angeles, said the allegations potentially put prosecutors in an awkward position because of the deal they had already cut with AMI.

“It shows how complicated and dangerous it is to make an agreement with National Enquirer,” Levenson said. “They may have to cooperate, but they’re continuing in their ongoing battle with Bezos and others.”

But Levenson said it was too difficult to tell if the case amounted to blackmail or extortion without additional context and some prosecutors may be reluctant to charge someone for threatening another with embarrassing material.