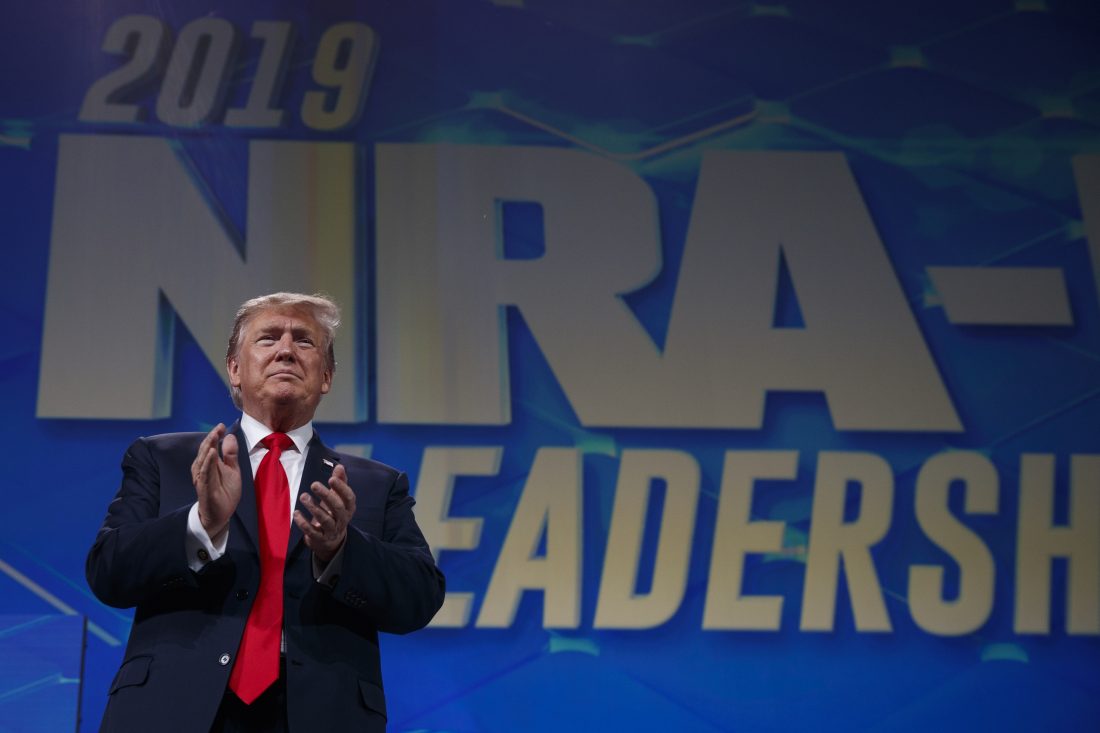 INDIANAPOLIS — In a largely symbolic gesture to a group that helped him win the White House, President Donald Trump said Friday he is pulling the U.S. back from an international agreement on the arms trade, telling the National Rifle Association the treaty is “badly misguided.”

Trump made the announcement at the NRA’s annual convention, where he vowed to fight for gun rights and implored members of the nation’s largest pro-gun group — struggling to maintain its influence — to rally behind his re-election bid.

“It’s under assault,” he said of the constitutional right to bear arms. “But not while we’re here.”

With pro-gun legislation largely stalled in Congress and few deliverables during Trump’s term so far, the president told the group that he would be revoking the United States’ status as a signatory of the U.N. Arms Trade Treaty, which regulates the multibillion-dollar global arms trade in conventional weapons, from small arms to battle tanks, combat aircraft and warships.

President Barack Obama signed the pact, which has long been opposed by the NRA, in 2013. But it has never been ratified by U.S. lawmakers.

“Under my administration, we will never surrender American sovereignty to anyone,” Trump said, before signing a document on stage directing the Senate to halt the ratification process. “We will never allow foreign diplomats to trample on your Second Amendment freedom.”

“I hope you’re happy,” he told the group, then appeared surprised by the cheers. “I’m impressed,” he said. “I didn’t think too many of you would really know what it is.”

His move against the treaty came as Trump sought to excite an organization that was pivotal to his victory in 2016 but, three years later, is limping toward the next election divided and diminished. And it represents just the latest in a series of withdrawals from international pacts and organizations joined by previous administrations, like the Paris climate accord and the Iran nuclear deal.

Gun activists had denounced the treaty when it was under negotiation as an infringement of civilian firearm ownership, despite the well-enshrined legal principle that says no treaty can override the Constitution or U.S. laws. The treaty is aimed at cracking down on illicit trading in small arms, thereby curbing violence in some of the most troubled corners of the world.

It was the first legally binding treaty to regulate the international trade in conventional arms and was overwhelmingly approved by the 193-member U.N. General Assembly in April 2013. It has been ratified by 101 countries — but key arms exporters including Russia and China and major importers such as India and Egypt have given no indication that they will sign it.

Advocates of tighter gun restrictions and those who had helped negotiate the treaty denounced Trump’s decision Friday.

Kris Brown, president of the Brady organization, said will “only embolden terrorists and other dangerous actors around the world.” And Rachel Stohl, managing director of the Stimson Center and a consultant to the treaty negotiations, said: “By turning its back on multilateral diplomacy yet again, the United States is disregarding global norms and allowing nefarious actors to trade weapons with impunity.”

Yet Trump’s showy rejection of the agreement from the stage has limited effect because it has been unlikely all along that he would send the treaty to the Senate for ratification.

At the United Nations, spokesman Stephane Dujarric called the treaty “a landmark achievement in the efforts to ensure responsibility in international arms transfers” and particularly important at a time of renewed interest in expanding weapons arsenals.

Trump’s speech came at a troubled time for the gun rights organization, a one-time Republican kingmaker, which has been grappling with infighting, bleeding money and facing a series of investigations into its operating practices, including allegations that covert Russian agents seeking to influence the 2016 election courted its officials and funneled money through the group.

As Trump landed in Indianapolis, a judge imposed an 18-month prison term on gun rights activist Maria Butina, an admitted Russian agent who, according to her plea agreement, worked with a former Russian lawmaker to use their contacts in the NRA to pursue back channels to American conservatives during the 2016 presidential campaign.

While the group had high hopes for easing gun regulations after pouring hundreds of millions of dollars into 2016 campaigns, much of the legislation the group championed has stalled, due, in part, to a series of mass shootings, including the massacre at a Parkland, Florida, high school that left 17 dead.

Adam Winkler, a UCLA law professor and expert on gun policy, allowed that the group had scored some victories under Trump, including the appointment of two Supreme Court justices who may be open to striking down gun laws.

But overall, he said, “On the legislative front, the NRA has been frustrated,” with priorities like national reciprocity for conceal carry laws and a repeal of the ban on silencers stalled.

Instead, Trump introduced a new federal regulation: a ban on bump stocks after a man using the device opened fire on a crowd of concertgoers on the Las Vegas strip, killing 58 people and wounding hundreds.

That bothered some members attending the convention, even as many donned “Make America Great Again” hats and cheered Trump loudly.

Mike Cook, who works at a shipyard in Alabama, said he’s been disappointed that gun rights haven’t seen much movement under Trump. The bump stock ban, in particular, upset him because it was done administratively by Trump officials.

He’s uncertain if the millions spent on Trump’s campaign in 2016 were worth it. But, he said, Trump is “better than the alternatives.”