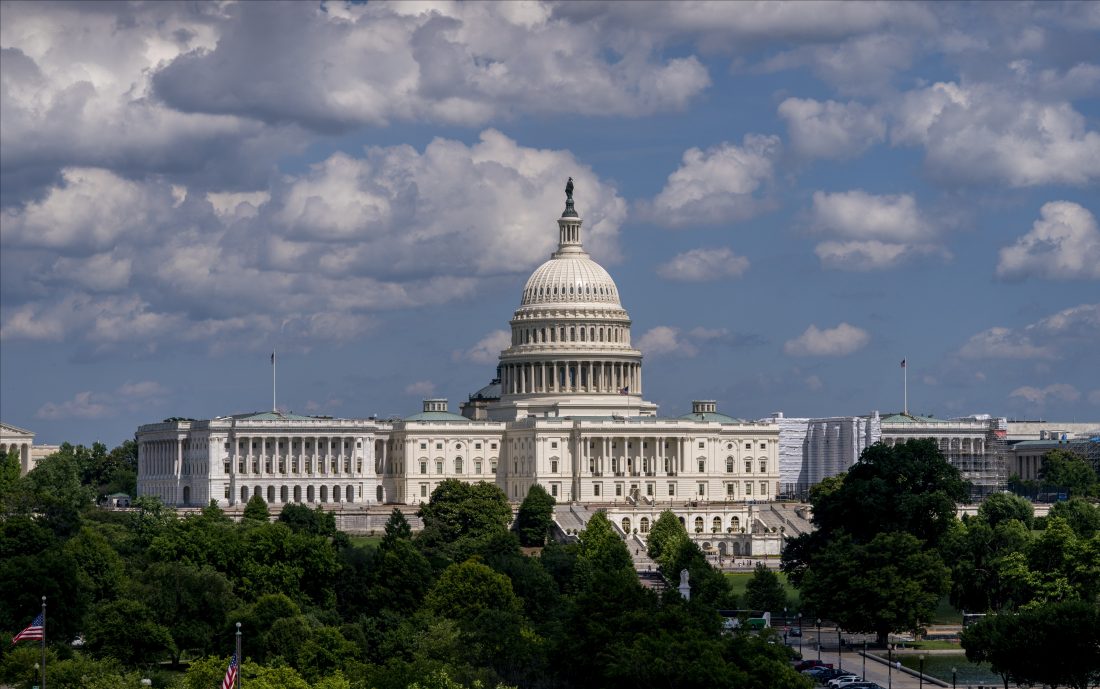 AP Photo/J. Scott Applewhite
The Capitol is seen from the roof of the Canadian Embassy in Washington.

WASHINGTON — Lawmakers are trying to set aside their irreconcilable differences over the Obama-era Affordable Care Act and work to reach bipartisan agreement on a more immediate health care issue, lowering costs for people who already have coverage.

Returning from their Fourth of July recess, the Senate and House are pushing to end surprise medical bills, curb high prices for medicines, and limit prescription copays for people with Medicare.

Partisan disagreements could derail the effort, but lawmakers fear the voters’ verdict in 2020 if politicians have nothing to show for all their hand-wringing about drug prices. President Donald Trump has political exposure himself because the big price cuts he promised haven’t materialized. On Friday, he promised an executive order that he said would be intended to enable the U.S. government to pay lower prices for prescription drugs. The U.S. would pay no more than the lowest amount paid by other nations or companies, he said.

“Frankly, the issue is so urgent for Americans who are facing increasing drug costs that to us it’s really not about who gets the credit,” said Rep. Diana DeGette, D-Colo. “It’s about what kind of relief we can give to consumers.” She serves on the House Energy and Commerce Committee, which has a role in shaping the legislation.

In the Senate, Republican Lamar Alexander has shepherded bipartisan legislation on surprise medical bills through the Senate Health, Education, Labor, and Pensions Committee that he leads. That bill also would raise the legal age for buying tobacco products to 21.

“Obviously we will continue to have significant disagreements on … Obamacare,” said Alexander. “What we’ve done is shift our focus to the larger topic — or the different topic — of reducing health care costs.” He would like his bill to be on the Senate floor by the end of this month.

Different pieces of legislation are at various stages in a half-dozen committees in the Senate and the House. The Senate seems to hold the keys to what can pass because Republicans and Democrats have to work together to avoid gridlock on the Senate floor that could sidetrack legislation. In the House, Speaker Nancy Pelosi, D-Calif., is keeping an open line to the Trump administration on drug costs.

“The public demand for action is high on both sides of the aisle and I’m sure these guys are feeling it,” said John Rother of the National Coalition on Health Care, an umbrella group that represents a cross section of business and consumer organizations. “They have to do something, and the question is, is that something is going to be meaningful, or is it going to be window-dressing?”

A look at some of the major pieces:

House Democrats are pushing for a floor vote on authorizing Medicare to directly negotiate prescription drug prices. Legislation from Rep. Lloyd Doggett, D-Texas, would empower the government to license generic competition if the manufacturer of a brand-name drug refuses to deal.

Think of it as an opening bid.

Medicare negotiations are a nonstarter for Senate Republicans, and the administration has been opposed although candidate Trump once advocated the idea. Liberals in the House say they’re not backing off.

“The first step is we pass a progressive bill in the House and then we see what the Senate takes,” said Rep. Ro Khanna, D-Calif. “We’ve got to do that as a first step, and then we’ve got to negotiate for as much as we can get, but we have to pass the bill we ran on.”

Senators of both parties and key lawmakers in the House are looking at requiring drugmakers to pay rebates to the government if the prices of medications covered by Medicare escalate beyond a yet-to-be-determined measure of inflation.

That wouldn’t solve the problem of high initial “launch” prices for brand-name drugs, but it could restrain cost increases for long-available medications such as insulin. Democrats say it could be a fallback if they’re not able to get Medicare negotiation authority.

A signal of whether inflation rebates have political traction could come within a couple weeks when senators are expected to offer a bipartisan compromise. The chairman of the Senate Finance Committee, Sen. Charles Grassley, R-Iowa, and the committee’s top Democrat, Oregon Sen. Ron Wyden, are trying to get a deal to reduce drug costs for federal programs and the people they cover. A senior GOP aide said rebates are under consideration. The aide spoke condition of anonymity because there’s no final agreement.

Senate and House lawmakers of both parties want to limit those copays, as does the administration. But lawmakers want to pair that with meaningful limits on prescription drug prices.

Senate Finance Committee members are considering a Republican idea that would allow the federal-state Medicaid program for low-income people to make installment payments for gene therapy treatments, which can cost $1 million or more.

Alexander’s committee has approved legislation that would hold patients harmless from “surprise” out-of-network bills that can run to tens of thousands of dollars. The House Energy and Commerce Committee is working on a similar bill.

Alexander said the legislation won’t solve every health care problem, but added, “You don’t have to preach the whole Bible in one sermon — you can do one important thing at a time.”