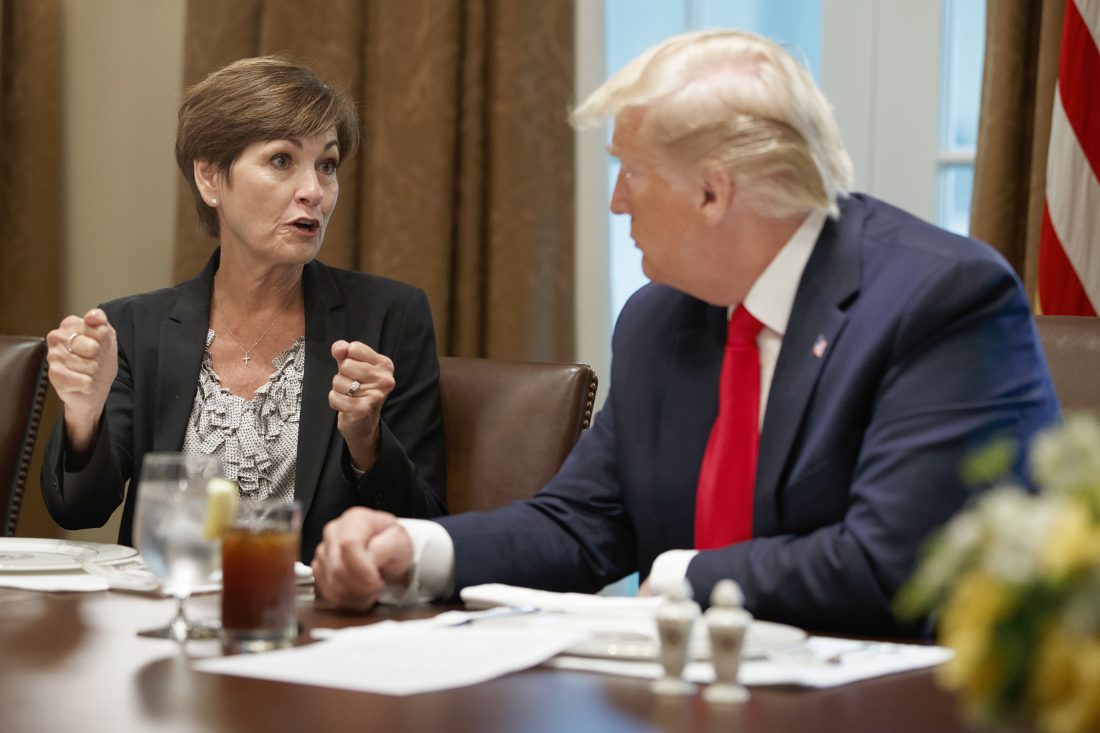 FILE - In this June 13, 2019, file photo, Iowa Gov. Kim Reynolds talks with President Donald Trump during a meeting with governors on "workforce freedom and mobility" in the Cabinet Room of the White House in Washington. Iowa Attorney General Tom Miller, a supporter of clean energy policies reducing greenhouse gases as a way to battle global climate change, said Wednesday, Aug. 14, 2019, he was blocked by Republican Gov. Reynolds from joining 21 other states in suing the Trump administration over a policy that relaxes restrictions on coal-fired power plants. (AP Photo/Evan Vucci, File)

Miller, a Democrat, said he asked Reynolds in July if he could join attorneys general in the other states and officials from the cities of Boulder, Colorado; Chicago, Los Angeles, New York City, Philadelphia and South Miami, Florida, in the lawsuit.

Reynolds refused to consent, he said.

“She does not believe it’s in the best interest of Iowans for the state to join in this lawsuit,” said Pat Garrett in a statement.

Miller’s spokesman Lynn Hicks said Miller was asked by the other states to join the case but couldn’t when Reynolds didn’t give consent.

In June, the EPA eliminated the Obama plan and replaced it with Trump’s Affordable Clean Energy rule that gives states more leeway in deciding upgrades for coal-fired power plants.

“The rule fails to promote clean energy, but instead incentivizes the use of coal-fired power generation,” he said, adding it would do nothing to address climate change harms caused by carbon pollution.

Ironically on Monday Reynolds signed a proclamation at the Iowa State Fair celebrating the state’s progress on reducing reliance on coal energy and expanding wind power.

Iowa is second in the nation in installed wind energy capacity and is projected to produce 40 percent of its electricity from wind turbines by next year.

Coal’s share of net electricity generation in Iowa has declined from 76 percent in 2008 to 45 percent in 2017, Hick said. Progress that is endangered by Trump’s policy, he said.

The cities and states sued the Trump administration in the U.S. Court of Appeals for the District of Columbia Circuit on Tuesday alleging it violates the federal Clean Air Act because it does not meaningfully replace power plants’ greenhouse gas emissions.