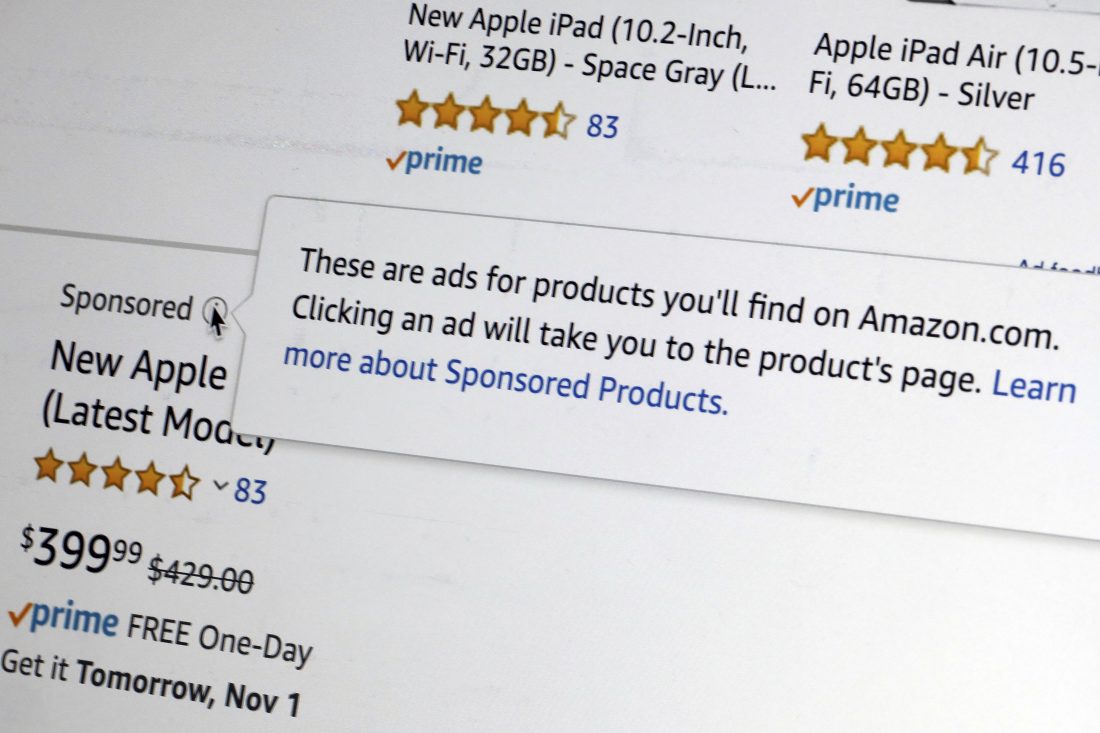 AP Photo/Richard Drew
The sponsored logo, and explanation, in an Amazon product offering on a computer screen in New York.

But instead of showing him the Synology router he was searching for at the top of his results, Amazon bombarded him with ads for hard drives and routers that he didn’t want.

Maddaloni, a web strategist in Appleton, Wisconsin, said searching on the world’s biggest shopping site had always been a good experience for him up until a month ago, when he started seeing more ads.

Amazon has turned its online store into an advertising powerhouse in just a few years. It overtook Microsoft last year as the third largest ad platform in the U.S. following Google and Facebook, according to market research firm eMarketer. That’s mostly due to Amazon’s search bar: Most shoppers now go to Amazon first instead of Google to look up products, according to Jumpshot, which tracks online shopping behavior.

The downside to Amazon’s booming advertising business is the impact on the user experience. Companies and brands can bid to get their products in Amazon’s search listings, sometimes pushing down what shoppers are searching for and making them harder to find. It risks betraying Amazon’s customer-friendly reputation and irritating shoppers like Maddaloni, who are used to Amazon being the place they go to find what they want to buy quickly.

Amazon’s ads show up at the top, middle and the bottom of its search listings, as well as within pages for other products. They look exactly like regular product listings except for the word “Sponsored” in gray. Holiday shoppers may notice more of them: In September, Amazon began putting three sponsored ads at the top of its search results, up from two, according to Marketplace Pulse, a market research firm that focuses on Amazon and other online marketplaces.

Jason Goldberg, a retail consultant and chief commerce strategy officer at Publicis Communications, said showing ads instead of what people search for is “the best example of Amazon failing to live up to its mission of becoming ‘Earth’s most customer centric company.'”

“That’s clearly not in the shopper’s best interest,” he said.

Advertising is one of Amazon’s fastest-growing businesses, helping to offset some of its more expensive endeavors like one-day delivery, which is hugely popular with customers but also a drain on the company. Amazon hasn’t said exactly how much it makes from ads, but its “other” business is mostly made up of advertising, which brought in $9.3 billion in the first nine months of this year, up 38% from the same period the year before.

Amazon launched its auction-like ad platform in 2014. Advertisers bid for specific keywords, similar to what search giant Google does. Skippy, for example, can bid to show up when someone searches for “peanut butter” or its rival, “Jif.” Some keywords can cost under a buck. Sought-after ones could cost much more. Amazon gets paid only when someone clicks on the ad, even if the product isn’t purchased.

The company said its sponsored ads are a way for customers to find products they may be interested in. And it uses machine-learning technology to try and show ads that are relevant to shoppers. But that doesn’t always happen.

After David Sinclair’s book on aging went on sale in September, colleagues told him that when they typed his name on Amazon, they saw ads for vitamins and supplements above his book. The supplement makers had selected Sinclair’s name as a keyword, hoping to get the attention of people who wanted to buy his book, “Lifespan: Why We Age — and Why We Don’t Have To.”

He tweeted a warning to his followers: “If you search for me on Amazon right now, you may first have to scroll past some sponsored ads for supplements. This is not my doing. I do not endorse products.”

The Harvard Medical School professor said the supplement ads made it look like he was somehow linked to the pills, which he is not.

After The Associated Press asked about the vitamin ads, Amazon said it wasn’t a good customer experience and removed them.

Erik Gordon, a professor who follows Amazon at the University of Michigan’s Ross School of Business, said the ads at the top of a search implies to many visitors that the products are the most popular.

“It is not misleading in the legal sense, but it borders on a breach of trust with visitors,” he said.

That could in turn drive some customers away from the site — but perhaps not enough for Amazon to change its behavior.