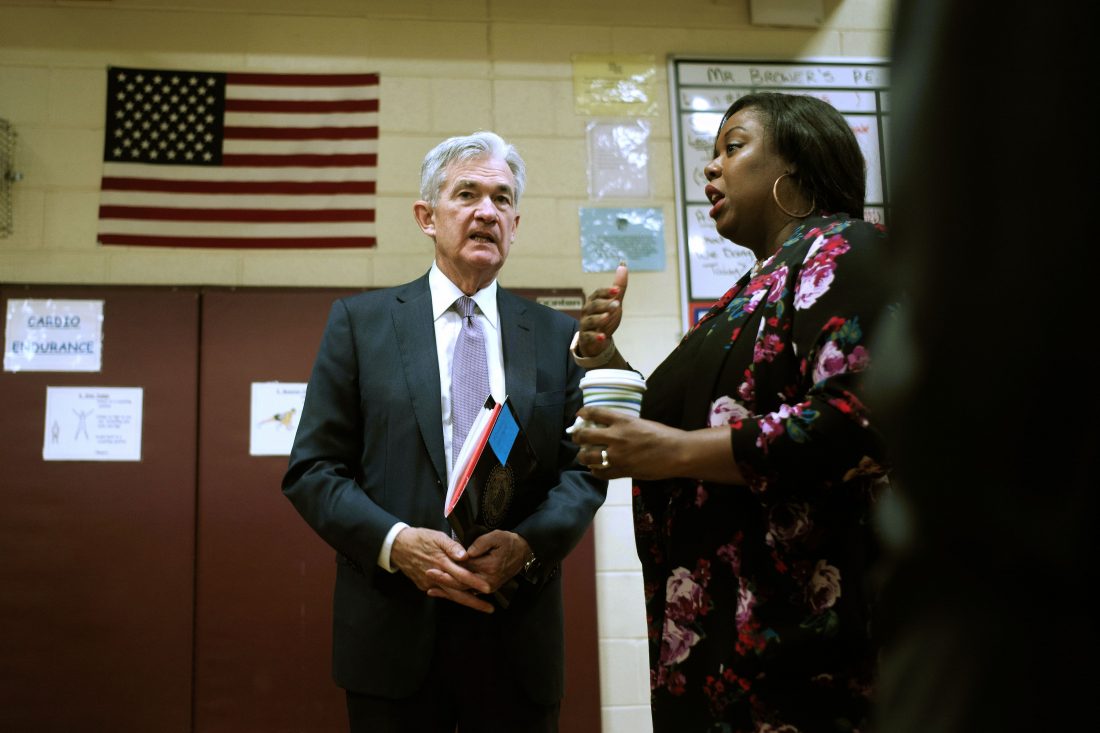 On Monday, he learned about the job market from an 18-year-old named Jasmine.

A recent high school graduate, Jasmine Ayala explained to Powell how she has just landed a good job as a laser operator at aircraft engine manufacturer Pratt & Whitney: After graduation, she received seven weeks of training, backed by a grant from a local nonprofit called East Hartford CONNects.

“It was an amazing opportunity,” Ayala said.

Her exchange with the chairman of the world’s most powerful central bank came during a visit Powell paid Monday to a hardscrabble neighborhood of East Hartford. The trip included a neighborhood tour and a meeting with residents to get an up-front look at their challenges.

Monday’s events are part of an ongoing outreach by the Powell Fed to representatives of labor unions, educators and community development groups. Many participants have told Fed officials that despite entrenched poverty in some areas of the country, more disadvantaged Americans are finally finding jobs and making economic progress.

One major reason for that is the existence of training programs like the one that helped Ayala.

Since becoming chairman nearly two years ago, Powell has sent a message seldom heard from his predecessors: That the Fed should consider the struggles of the lowest-income Americans in setting its interest-rate policies.

Low interest rates generally help sustain a solid job market, which, in turn, can encourage job training efforts. As unemployment has reached a nearly a 50-year low of 3.6%, more employers are taking more chances on young people without college degrees and are training them.

“We try to create a strong labor market, but for some it’s not enough,” Powell said after residents told of vital help they have received from East Hartford CONNects, including child-support assistance that allowed them to re-enter the job market. “They need to be given a chance.”

The notion that the Fed should try to sustain the expansion to help the most disadvantaged people might seem self-evident. But throughout its history, the Fed, whose mandate is to stabilize prices and maximize employment, has rarely expressed the need to suit its policies to benefit the least fortunate.

With unemployment low, most of Powell’s predecessors would have focused on the threat of high inflation and the possibility of raising rates to forestall it. The prevailing belief has been that addressing economic inequality or poverty is the purview of Congress, not the Fed.

“What I sense is different is that he sees those benefits (to workers) as so important that he is less willing to lose those benefits to quell phantom inflation,” said Tim Duy, an economist at the University of Oregon.

Powell still says the Fed’s main focus is the health of the job market and the stability of prices. But as he nears the end of his second year as chairman, he has increasingly opened the door to the idea that the Fed can also lift up those who still struggle years after an economic expansion has boosted the fortunes of most Americans. One driver of that change has been the outreach effort the Fed launched a year ago as part of a review of its financial tools and strategy.

In August, at an annual gathering of central bankers in Jackson Hole, Wyoming, Powell began his speech by observing how the U.S. economic expansion — the longest on record — was finally benefiting working people, through higher pay and more plentiful job opportunities.

His speech took some economists by surprise.

“It is almost inconceivable that Powell’s predecessors would have begun an important talk on monetary policy this way,” Dean Baker, an economist at the progressive Center for Economic and Policy Research, later wrote in a column that called Powell a “Labor Day hero.”

“Powell has explicitly made the plight of the poor and working class part of the Fed’s agenda,” Baker wrote.

Janet Yellen, Powell’s immediate predecessor, had begun to raise these issues during her tenure. At the 2016 Jackson Hole conference, some of Yellen’s deputies met with members of “Fed Up,” an organization that advocates for low rates to support economic growth and hiring.

But Stephanie Aaronson, director of economic studies at the Brookings Institution and a former Fed economist, said Powell has linked Fed policy more explicitly to issues like inequality. Ben Bernanke, who preceded Yellen as Fed chair, spoke about economic inequality, but his stated remedies were in areas outside the Fed’s reach, like education and job training.

And in the past when Fed officials would meet with community groups, they tended to discuss issues that only indirectly help the economically disadvantaged — fairness in bank lending, for example.

The Fed’s current outreach “is actually about monetary policy — and that does make it really different from the usual types of interactions that the Fed has with community groups,” Aaronson said.

Aaronson co-authored research this spring that found that a persistently low unemployment rate can significantly narrow employment gaps between whites and African-Americans and Latinos. Her research also found that the narrowing of that gap accelerated as unemployment fell further. In East Hartford’s school system, nearly half the students are Latino.

Chela Gage, director of talent acquisition at Pratt & Whitney, which is based in East Hartford, said the persistence of low unemployment has led the company to think more creatively about hiring.

“We are stretching our arms to see where the talent lies,” she said.

Ayala was working part time while still in high school, applying make-up at weddings and other events for $10.10 an hour. That income helped her family, and she wasn’t sure she could have given it up for training without the stipend she received. Her new job at Pratt & Whitney pays $29 an hour.

“Things don’t happen unless you work hard,” she said.

J.W. Mason, an assistant professor at John Jay College, said that Fed officials haven’t often acknowledged that their policies have varying consequences for different socioeconomic groups. Many economists have long argued, for example, that when the Fed raises rates to try to stop prices from accelerating, it risks hindering the kind of robust job market that disproportionately helps disadvantaged workers.

“It’s not just about the whole economy,” Mason said. “It’s about who’s benefiting. It’s always been true, but people didn’t want to acknowledge it.”