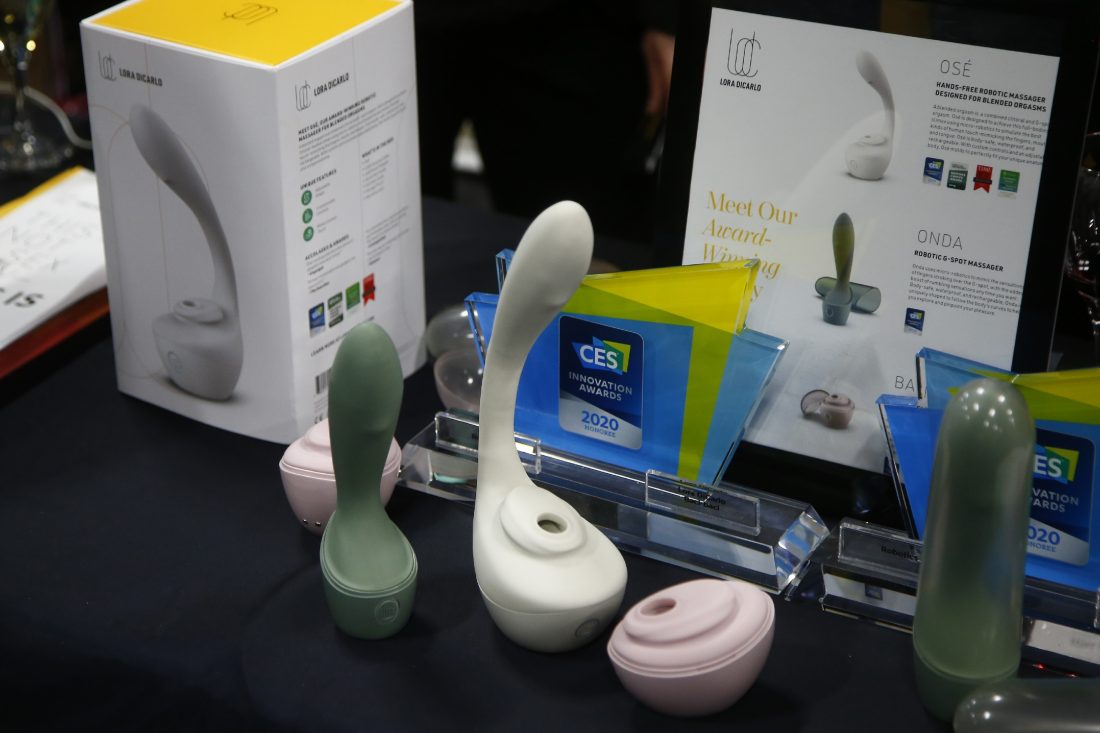 LAS VEGAS — Sex tech is gracing the CES gadget show in Las Vegas this week, a year after organizers took fire for revoking an innovation award to a sex device company led by a female founder.

CES is allowing space for sex tech companies as a one-year trial. At the show, such companies were scattered throughout the health and wellness section, near startups pitching fitness trackers and infrared saunas.

Lora DiCarlo, a startup that pushed for changes after organizers revoked its award, showed off its Osé robotic “personal massager.” It’s one of a dozen companies at the show focused on vibrators, lube dispensers and other sex tech products. Founders of these startups say their products are about empowerment and wellness for women, something they say has often been overlooked in tech.

The historically male-dominated tech trade show has received criticism in past years for having an all-male lineup of speakers and for previously allowing scantily clad “booth babes,” fostering a “boys’ club” reputation.

“It’s been a process,” said Gary Shapiro, the head of the Consumer Technology Association, which puts on CES.

It’s been a longer process for many sex tech companies to convince investors that they are part of a growing trend that has enough customers. Much of the push has come from the startups’ female founders and from younger consumers who talk more openly about sexuality.

Sex tech has existed in some form for decades. But the gates really began to open in 2016, said Andrea Barrica, founder of sex education site O.school. That year, several other “fem tech” companies made progress in areas such as menstruation and menopause. Those paved the way for sex tech to grow and get investors interested.

“Larger institutions are starting to take note, all the way from VC firms to large Fortune 100 companies,” said Barrica, who recently published the book “Sextech Revolution: The Future of Sexual Wellness.” Large institutions like CES had no choice but to look at sex tech, she said.

“It’s entirely because of our refusal to allow the business world to put us down,” she said.

Founders insist that their devices — ranging from vibrators to lube dispensers to accessories — have effects outside the bedroom.

“Sexual health and wellness is health and wellness,” said Lora DiCarlo, CEO and founder of the company of the same name. “It does way more than just pleasure. It’s immediately connected to stress relief, to better sleep, to empowerment and confidence.”

DiCarlo and other female founders pushed back for banning them but allowing humanoid sex robots meant to serve men the previous year.

Following criticism, CES organizers ultimately reinstated the award and apologized. A few months later, the show announced policy changes such as a dress code to prevent skimpy outfits and new “Innovation for All” sessions with senior diversity officials.

Polly Rodriguez, CEO of sexual wellness company Unbound, said the company is profitable and customers are more open about buying products than they once were. But she said she still faces roadblocks advertising on social media, and many traditional investors snub the company.

“Things are better, but there’s just still this genuine fear of female sexuality more broadly within the institutional side of technology,” she said.

And while Gallop offered to speak at CES, conference organizers declined, saying sex tech was not a part of its conference programming.