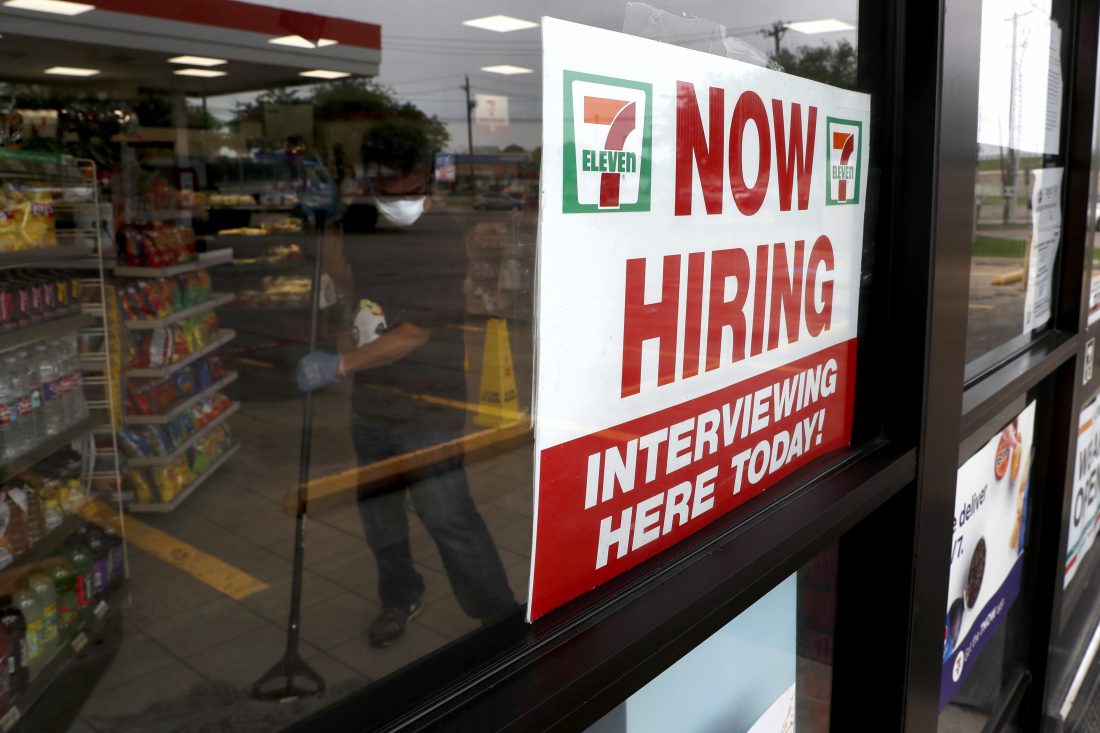 ap photo A sign on the window at a 7-Eleven store reads, “Now Hiring,” as an employee inside the store wears a mask and gloves while mopping the floor amid the coronavirus health crisis in Dallas, Wednesday.

WASHINGTON — For weeks, the Trump administration played up the dangers of the coronavirus as it sought to convince Americans to disrupt their lives and stay home. Now, as President Donald Trump aims for a swift nationwide reopening, he faces a new challenge: convincing people it’s safe to come out and resume their normal lives.

It’s a defining question for a cloistered nation — and a political imperative for Trump, whose reelection likely rides on the pace of an economic rebound.

Can the country move beyond a crippling fear of the virus and return to some modified version of its old routines, doing what’s possible to mitigate the risk of COVID-19, but acknowledging it may be a fact of life for years to come?

“We need to create the kind of confidence in America that makes it so that everybody goes back to work,” said Kevin Hassett, a White House adviser and former chair of the Council of Economic Advisers. “And that confidence is going to require testing and confidence that your workplace is a healthy place, but also confidence in the economy.”

At the White House, officials believe they’ve entered a new chapter of the pandemic response, moving from crisis mode to sustained mitigation and management.

It began last Thursday with the release of guidelines to governors for how to safely reopen their states. Trump and Vice President Mike Pence celebrated Americans for successfully “flattening the curve” of the epidemic.

A day later, a phalanx of the administration’s top medical officials sought to reassure the nation that there were plenty of tests available to safely begin easing restrictions.

Governors have been lifting restrictions each day since then, including aggressive moves announced Wednesday in Montana and Oklahoma. The Montana governor gave schools the green light to open their doors in early May, and Oklahoma will allow salons, barbershops, spas and pet groomers to reopen Friday.

The governors’ moves coincided with lingering bleak news around the country. The death toll in Massachusetts eclipsed 2,000 on Wednesday, doubling from just a week earlier. About 16,000 people remained hospitalized across New York. A meat plant in Iowa that is vital to the nation’s pork supply is the latest slaughterhouse to shut down because of outbreak. With the economy in for a long, brutal slump, Congress was on the verge of passing an almost $500 billion relief bill to bolster small businesses.

Trump flatly promised Americans that there will no repeat of the national lockdown. “We will not go through what we went through for the last two months,” he said.

It’s a sharp shift in rhetoric after Trump and allies stressed the threat of an “invisible enemy” to persuade people to abide by social distancing recommendations. The American people have also been scarred by the daunting death toll and images of body bags piled up in refrigerated trailers.

Moving from fear to acceptance will take confidence in government, medical professionals and businesses at a time when faith in those institutions is low. White House aides say restoring confidence will require the same “whole-of-America” approach that slowed the virus spread.