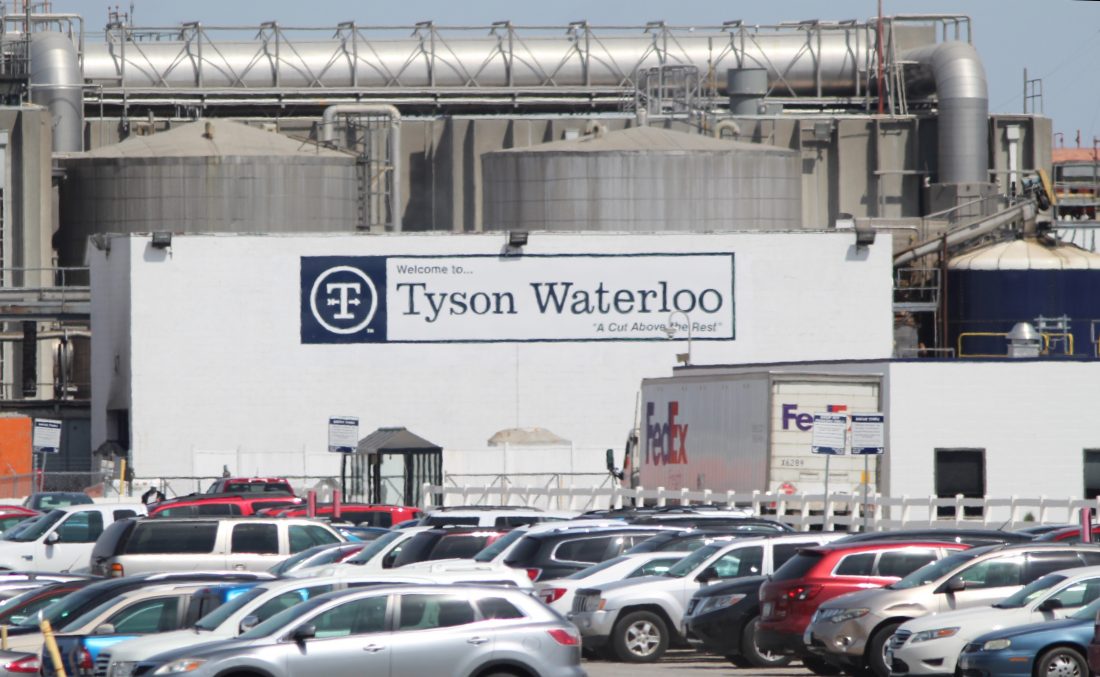 ap photo On Friday, more than a dozen Iowa elected officials asked Tyson to close the pork processing plant because of the spread of the coronavirus among its workforce of nearly 3,000 people.

DES MOINES — More than a dozen Iowa elected officials on Friday implored Tyson Fresh Meats to close their Waterloo pork processing plant, saying the coronavirus is spreading among workers and is endangering both employees and the surrounding community.

Mayors, county officials and state legislators signed the letter that was sent to Tyson on Thursday. The 19 officials said at a Friday news conference they had only received confirmation from the company that it had received the letter but no other action.

“I’m really fearful that if Tyson management doesn’t address this issue effectively, their workforce will either voluntarily stop coming to work or be too sick to work,” Waterloo Mayor Quinten Hart said. “Our hope was that in a time of crisis when we’re all made equal that we would inherently do the ethical, morally right thing that wasn’t done.”

Company spokeswoman Liz Croston said Tyson has been working with local, state and federal officials and is following Centers for Disease Control and Prevention guidelines. She said worker temperatures are taken before entering the plant, masks are required and cleaning has been increased as has distancing between workers.

“Our primary focus is protecting our people while continuing to fulfill our critical role of feeding families in this community and around the nation, while providing market continuity for hundreds of area hog farmers,” Croston said.

The Waterloo area officials also accused Gov. Kim Reynolds of misleading Iowans on the seriousness of the outbreak among the nearly 3,000 workers at the plant and for failure to take more aggressive action.

Hart said he contacted Reynolds’ staff and the Iowa Department of Public Health on Wednesday morning seeking immediate closure of the plant. Reynolds contacted him that afternoon, Hart said, assuring him the state was taking proactive measures.

Reynolds said at her daily news conference Friday that the state’s goal is to avoid closing the plant, which can process 19,000 pigs a day. She said the state is working with Tyson to test employees at facilities in Columbus Junction and Waterloo, and to trace their connections to others to identify community spread.

Testing was completed Friday in Columbus Junction, where Tyson officials said two workers had died following an outbreak where at least 148 workers have been infected. The plant has been closed since April 6 but the company hopes to reopen it next week.

Reynolds said 2,700 tests were sent to the Waterloo plant and they will be processed at a state laboratory over the weekend.

“We will continue to keep an eye on the data but that’s really the reason were helping the facilities with the surveillance testing because we do believe that the CEOs at these companies want to do the right thing, want to keep their employees healthy,” Reisetter said.

For most people, the new coronavirus causes only mild or moderate symptoms, such as fever and cough. For some, especially older adults and people with existing health problems, it can cause more severe illness, including pneumonia.