How old is that deer? 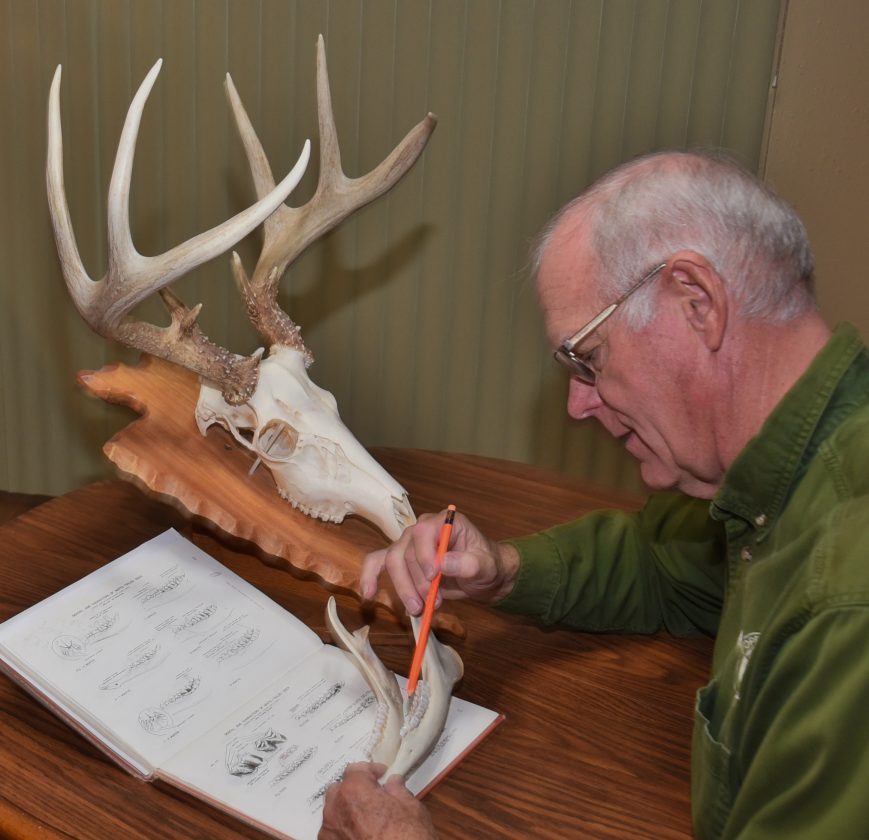 PHOTO BY GARRY BRANDENBURG How old is my deer? It is a frequently asked question. The answer can be easy or at best an educated guess. It all depends upon the information presented. A cleaned lower jaw bone with intact teeth can be compared to an average white-tailed deer growth history chart, like the chart Garry has in front of him in this photo. These are very helpful and accurate up to age 2.5 however accuracy drops off after that, sometimes even for trained biologists. If one wants really accurate age determination, a front incisor tooth can be lab tested, for a fee, whereby the lab technicians use a very thin slice of the tooth and count annual growth rings. In today’s photo, the author bow killed this deer more than 10 years ago. The best guideline from the growth chart would peg this deer at age 3.5. I did not spend the money for an official lab test.

HOW OLD IS MY DEER? I tried to answer this question many times during my working career with the Marshall County Conservation Board 1972-2004. It is a easy question to ask and it deserves as honest an answer as possible. Hunters would sometimes bring their deer to the shop and ask for an on-site inspection for age. That is when I would pull out my Iowa State University mammalogy textbook that had a deer growth chart for comparison. I’d do my best to make an educated guess. I also told hunters that if they wanted a definitive and really accurate number, an incisor tooth would need to be lab tested. Most hunters just took my word for it.

Wildlife biologists, however, may need more accurate data. And every state in the USA has used a specific lab to test sample teeth sent to them as accuracy is a paramount requirement for ungulates like deer. Since deer have the propensity to quickly repopulate or even over produce above the carrying capacity of the land, deer herd management is essential to keep numbers in line with both the habitat’s ability to support deer and within the tolerance level of the human population. Deer management is to a large part also people management. And it is accomplished by regulations, specific to various counties and regions of the state, with deer hunting licenses and quotas set accordingly.

Teeth are composed of four tissues: pulp, dentine, cementum and enamel. Pulp contains the blood vessels that nourish the tooth. Dentine works as a framework to support the enamel. Cementum cover the root and connects the tooth to the jaw bone. Enamel is the hard outer cover and crown. As a deer eats its way through its years of life, teeth wear down very gradually and the amount of wear on the large molar teeth is what is depicted on deer tooth charts.

Cementum adds a layer every year, similar to growth rings of a tree. If one can count those rings via lab testing, a more accurate age can be specified. The lab will take an incisor, clean it and set it into a wax holding base. Next step is to make microscopic slices of the tooth. A good slice is about one-fifth the diameter of a human hair, or about 14 microns thick. This sample is transparent, gets stained and cover-slipped to protect the fragile sample. The microscope is next, where magnification powers can be adjusted as the operator looks at the sample. What is observed are thicker light bands and accompanying thinner dark bands of the cementum. Dark bands correspond to winter feeding conditions where nutrient levels fall off considerably. Thus the analogy to tree growth rings.

Age of fawns is pretty safe to tell. Most are born in late May or early June. If a fawn is killed the following fall, both its body size and small skull size and its corresponding shorter jaw containing “baby teeth” will be present. Not all of its molars have erupted at this time. Yearlings, age 1.5 in the fall, have grown in both body size and jaw length. The third pre-molar has three cusps if under 18 months of age. When that tooth drops out, it is replaced with a new tooth that has only two cusps. So the age 17, 18 or 19 month old animals can safely be called yearling.

From this point onward, for deer age 2.5, 3.5 and so on until ages 9 or 10, things can get more uncertain with time. Body size of deer is related to the ability of the animal to reach adult status which for buck deer is 5.5 to 6.5 years old. At that point its skeleton is maxed out and it can afford to and many times does allow for prime time antler growth to that animal’s genetic potential. If good nutrition accompanies that deer, antler growth will be very impressive. However, to get to that stage of life, it has to avoid every possible adversity: predators, disease, dangerous highway crossing, weather extremes and hunters. Really big antlered buck deer can only survive to their prime time if they can escape all the problems life can throw at them.

Many hunters try to make guesses of buck age based just on antler size. To a point this has merit, but a huge word of caution is required. Antler size alone is fraught with unknowns. Nutrition plays a role. So does genetics. And if the deer is past prime, or really old, its antler mass can become smaller each following year. Only accurate tooth lab analysis can answer the age question.

Lab testing of wildlife teeth is a big business. All 50 states and every Canadian province plus many foreign countries use the service of Matson labs. You can learn more about them at their website. If you are so inclined to know an accurate age of your deer, the lab will give you specific instructions of how to make that happen. You also get to write a check or use a credit card to pay for the information.

DEER HARVEST DATA as of mid week shows a statewide take of more than 7,200 deer. This is on the way toward 100,000 by mid-January of next year. It takes that many deer out of the overall population to maintain the balance biologists desire for the State of Iowa. Marshall County hunters have recorded about 45 deer so far. Approximately half have been doe deer and the other half male deer.

TROUT AT SAND LAKE are on the calendar for noon on Oct. 25. Two thousand rainbow trout will be piped out of the DNR fish hatchery truck at that time. Trout close to home is one major objective of this hatchery program. A trout fee is required for anglers in addition to a regular fishing license.

SNOW GEESE will be making their migration journey next month. Snow geese and the color variation called “blues” will be in the flocks as they pass overhead. Did you know that blues and snows, as they are often called, are the same species? Just one gene controls whether the young will have white or dark body plumage.

TREE LEAF COLOR should reach it maximum color offerings this coming week and early next week. You could drive to McGregor and follow the Great River Road to Keokuk. Or you could drive the county roads in Marshall to Mormon Ridge and then to Grammer Grove. At Grammer, take a hike along the trails, camera in hand and eyes open to tree leaf color patterns that are delightful to behold. It is nice to know that leaf litter on the forest floor does decompose over time. Otherwise if it didn’t, leaf accumulation would be miles deep from ages past. Now, will we allow our lawns to accumulate leaf litter? Each to his/her own answer on this question.

Quote: “Education is not the learning of facts, but the training of the mind to think.” — Albert Einstein

Garry Brandenburg is a graduate of

He is the retired director of the Marshall County Conservation Board. Contact him at PO Box 96, Albion, IA 50005. 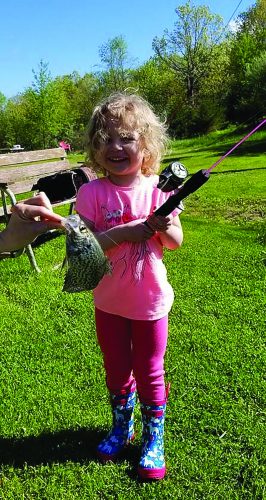 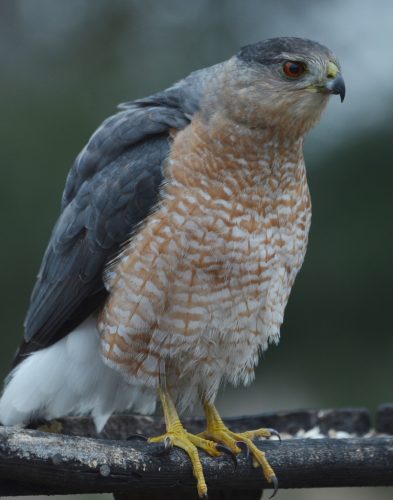 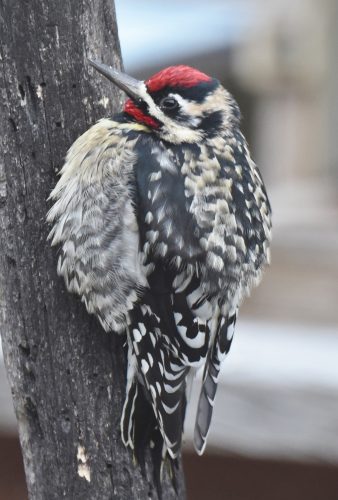 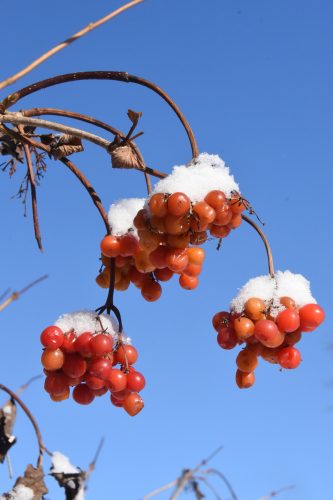