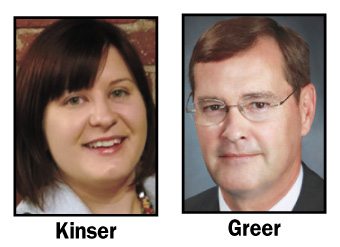 With the election of Marshalltown City Council member Joel Greer to the position of mayor in 2017, discussion was held at Monday’s council meeting on how to fill the upcoming second ward vacancy.

“We are going to have a council vacancy in the second ward created when council member Greer moves to the office of mayor,” said City Administrator Jessica Kinser. “I’m recommending that we move forward with an appointment process to fill the vacancy.”

She added that if the council moves forward with filling the vacancy by appointment, second ward voters would still be able to petition for a special election.

“If there is an appointment to the second ward vacancy, when it’s created, that means that there would still be somebody that the council would appoint in that spot until the special election were held,” Kinser said. “With this [motion], you would be directing myself and (City Clerk) Shari (Coughenour) to start preparing timelines and other things for how the appointment process will take place.”

In a 7-0 decision, the council approved Kinser and Coughenour to move forward with appointment preparations.

“It certainly doesn’t commit you to something; we can come forward with a resolution for an appointment, and it can be voted down at that point, and then we change lanes,” Kinser said of the motion.

Council member Leon Lamer said he hopes many people from the second ward fill out an application for appointment. Kinser confirmed that if the appointment option is taken by the council, applicants will be interviewed for the job before one is appointed to the seat.

Council member Bill Martin voiced his support for such an ordinance.

“I see it as a very appropriate tool to spring forward,” he said. “It would help the community head off problems.”

After discussion, language was added to the draft specifying a $75 license fee for a massage therapy business.

A resolution authorizing a 28E agreement between the city and the Iowa Department of Transportation for a rice grass wetland parcel in the southeast city limits was approved Monday.

She also said the park area is home to numerous bird, tree and plant species and that she hopes local schools will use the area for study and research on local ecology.

“The city will be responsible to control noxious weeds and any nuisance rodents,” Selness said.

The resolution was approved in a 6-1 vote. Council member Al Hoop was the sole “no” vote, and voiced concerns about future maintenance costs.

Lamer said he changed his mind about the resolution after it came up at a previous meeting.

“We voted, last time around, to not accept this 28E agreement,” he said. “I think, once we make the initial investment to get the trail in, I think the maintenance on it will be little or nothing.”

As part of Monday’s consent agenda, the council approved a 3 percent salary increase for Kinser. In open session during the Nov. 13 regular meeting, the council voted 5-0 in favor of the increase; they did so after going into closed session for discussion, according to the minutes of that meeting.

The council also approved a resolution authorizing a loan to the Tax Increment Revenue Fund to fund Marshall Economic Development (MED). During discussion, MED Executive Director Tom Deimerly shared updates with the board.

“We will have the updated housing study completed in December,” he said. “We’re really interested to see what’s going to come from that; we did a previous study three years ago and I think we’ve made some progress in that arena.”

Kinser was authorized to submit a grant application to the Martha-Ellen Tye Foundation for a wayfinding master plan.

A resolution was also passed approving a contract between the city and GTG Architects LLC of Johnston for architectural, engineering and other services for the Veterans Memorial Coliseum in the amount of $162,800.

The next Marshalltown City Council meeting is set for 5:30 p.m. Dec. 11 on the second floor of the Carnegie building, 10 W. State St.