A partridge in a pear tree 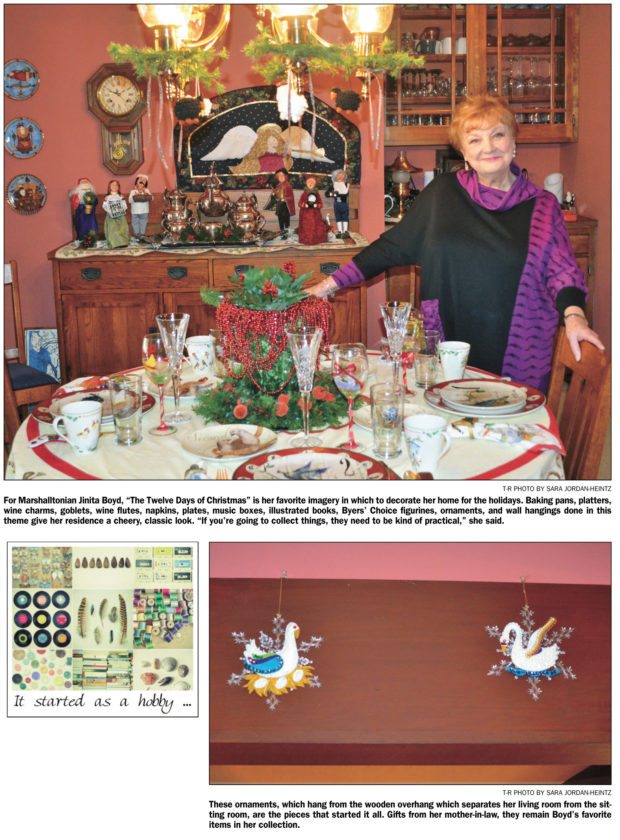 Editor’s note: This is part of an occasional series profiling the various personal collections of residents of Marshalltown and the surrounding area.

For many people, the classic Christmas carol “The Twelve Days of Christmas” is merely a light-hearted song about a series of eccentric gifts given to one person from an admirer. However, alternative theories abound as to what the song truly symbolizes. For Marshalltonian Jinita Boyd, “The Twelve Days of Christmas” is her favorite imagery in which to decorate her home for the holidays.

Boyd was first drawn to this style of decor as a newlywed. She and her husband, Doug, got married on Jan. 6, 1973 — the Epiphany — also known as Three Kings’ Day. This date, which comes 12 days after Christmas, commemorates the revelation of God incarnate as Jesus Christ, as visited by the Magi, or three Wise Men, who gifted the infant with gold, frankincense and myrrh.

“My husband, who is retired from Fisher, traveled a lot for his work, but he would get a week off for Christmas and New Year’s Day, so that was our down time,” she said.

Boyd, a Marshalltown native, lived in different parts of the country before finally returning. In the early 1970s, she was stationed in Vietnam with the Red Cross. She is also a retired teacher.

She cited her mother-in-law as the person who helped her start her Twelve Days of Christmas collection. While browsing a holiday bazaar held at the Marshalltown YMCA-YWCA, the two women spotted handmade ornaments, each one designed to represent one of the 12 days.

“The ornaments are what really kicked it off for me,” Boyd recalled. “They are still my favorite pieces in the collection.”

The ornaments are hung from the wooden overhang which separates her living room from the sitting room. Boyd said when her children, Kerry and James, were little, family members would line up under each ornament and sing the parts of the song that corresponded.

“It was just a lot of fun and laughter,” she said.

Boyd is a discerning collector.

“If you’re going to collect things, they need to be kind of practical,” she noted.

The collector shops for her items through catalogs, at Williams-Sonoma, and during visits to Germany’s Nuremberg Christkindlesmarkt. She is careful not to accumulate too many pieces, focusing on things she can use for entertaining guests, such as tableware. Her favorite thing about collecting this style of decor is how imaginative the designers can be.

“I like how different artists interpret [the theme],” she said. “Some are more whimsical, others are more traditional and solemn. If they were all the same interpretation of the song, it wouldn’t be as fun.”

Her decorations go up a few weeks before Christmas and come down after Epiphany. Leaving her treasured pieces on display this long allows her to savor the holiday season.

“Shopping, wrapping gifts, decorating, baking and writing Christmas cards — you want to squeeze that all in to a 3-4 week period? We have until Epiphany to just enjoy it all,” she explained.

What’s her favorite of the 12 days?

“The first day, the partridge in a pear tree, is my favorite because it symbolizes Christ. It’s the part of the song that always is repeated,” she said.

Boyd is referring to one of the popular interpretations of the song which hypothesizes that each of the 12 days is coded and actually symbolizes Holy aspects of Christianity. “The Twelve Days of Christmas” was penned in 16th century England during a time of religious persecution against Catholics. The theory posits that:

The partridge in a pear tree is Jesus Christ.

The two turtledoves are the Old and New Testaments.

Five gold rings stand for the Pentateuch (the first five books of the Old Testament).

Nine ladies dancing are the nine fruits of the Holy Spirit.

Twelve drummers drumming stand for the twelve points outlined in the Apostles’ Creed.

“It’s the symbolism, artistry and celebration I like the best,” she said. “When it’s all up, I just love it. Almost everything has a story behind it, and that’s a lot of memories for me.”

If you collect something interesting or unusual, contact this writer at the information below.