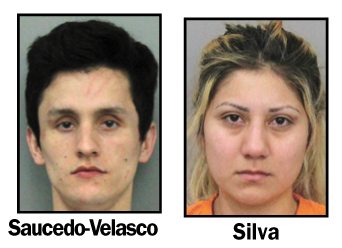 A Marshalltown couple has been arrested following a child welfare check.

According to Marshalltown Police Department Capt. Brian Batterson, officials with the Deparment of Human Services were making a child welfare check at a residence in the 200 block of East South Street Friday evening.

While there, DHS officials called for officers from the MPD to assist.

When officers arrived, they noticed that a man — Norberto Saucedo-Velasco, 22 — was there; he currently has a no contact order with the woman of the residence. When authorities made their way inside, the woman — Katherine Silva, 25 — became uncooperative and tried to block the officers in their attempt to make contact with the man.

Subsequently, officers reached Saucedo-Velasco, who also became uncooperative, and at one point, knocked off the glasses of one of the officers, and then purposely stepped on the eyewear.

Both Saucedo-Velasco and Silva were arrested and charged with interference with official acts and child endangerment/no injury. The child, in question, was inside the residence at the time, and DHS officials took custody of the child.

Saucedo-Velasco was also charged with violation of a no-contact order and fifth-degree criminal mischief.