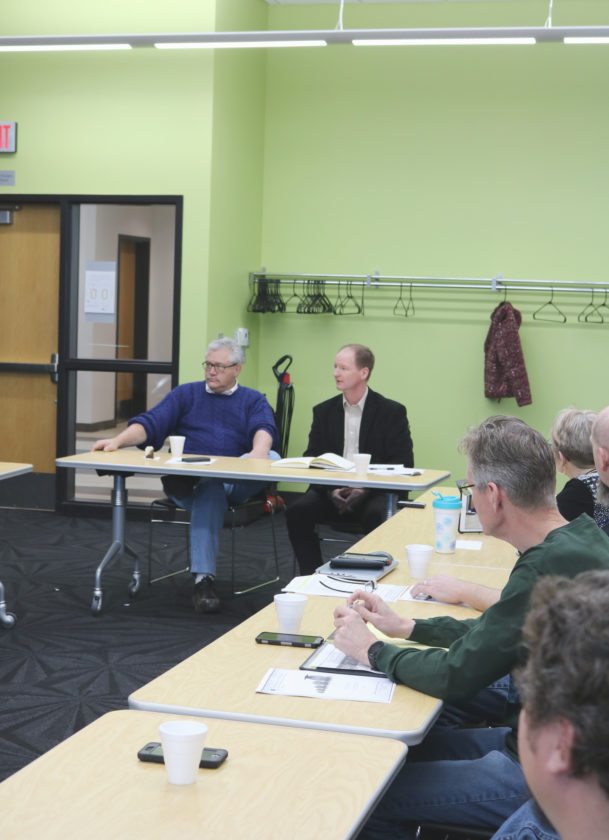 A variety of bills are under scrutiny in Des Moines as the 2018 state legislative session rolls on, and local lawmakers were asked about education legislation at Saturday morning public forum.

“This is the time of the year when you hear lots of things being brought forth that you may have opinions on,” said state House Minority Leader Rep. Mark Smith, D-Marshalltown at the this year’s first Marshalltown Education Association (MEA) Legislative Breakfast. “As those subcommittees come out, this is an opportunity for you to speak to those issues.”

“Last week, the Senate did release their de-appropriations bill, which I think probably took some people off-guard with the amount that we did choose to de-appropriate,” he said. “However, that did leave K-12 harmless; I’m not 100 percent happy with everywhere that de-appropriation put in.”

“I think that will be addressed,” Edler said of the proposed cut to community colleges.

Edler said the K-12 funding was “held harmless” because, along with Medicaid, the area is not set for cuts under the Senate de-appropriations bill. He added that the choice not to make such a cut shows that K-12 is a high priority.

“The reality is we’re not keeping pace,” Schutte said, adding low increases make for tough budgetary decisions at the district level. “Even when we’re ‘held harmless,’ as you (Edler) said, you get 65 percent of the districts losing kids, they’re making cuts.”

He agreed with Edler that having no cuts with relatively low increases is preferable to cutting K-12 funding, but added “it’s not anything to be cheering about.”

Smith said the state budget continues to grow, but at a slower rate than expected.

“It’s a matter of the priorities, in my opinion, of where the money should go,” he said. “On our side of the aisle, we very strongly believe that public education, K-12 through our public institutions for higher learning, should be more of a priority than it currently is.”

Edler said he hasn’t yet seen Chelgren’s bill, adding he believes in continuing to fund the state’s public school system and that he is open to discussions on how education is delivered.

“We don’t want to penalize any education, because all education is good; we just need to align the right education to the right student,” he said. “How can we come up with a system that really creates that openness of education for all the kids who may have a different need?”

Edler added he would scrutinize the plan set forward in any education savings account legislation.

“I would have to really see a good plan of what’s going on or what they’re asking to do, and how it’s going to affect the K-12 funding,” he said, adding he “doesn’t know” if tagging state per-pupil funding to students who use a nonpublic school program would be the correct choice. “I don’t know that that’s the necessary answer to how we accomplish that, especially in a short budget situation.”

Smith said strengthening public schools is one of his priorities.

Smith also said it is important that Iowa’s students can “compete in a global economy,” and that he thinks more money from the state’s income and sales tax receipts should be put into K-12 education.

“When you don’t have that, your only choice is to cut programs or to increase property taxes on the people, which is a more regressive tax,” he said.

A proposed bill by state Rep. Dean Fisher, R-Montour, was also discussed. The bill, which would call for the Iowa Department of Education to create an elective Bible literacy curriculum for public schools, has been met with both support and push-back.

“I have not seen the language on that,” Edler said of the bill. “I’m not going to put an unfunded mandate on the schools.”

Smith said the bill will likely spark discussion if it makes it past the committee level in the House.

“It’s one that I think, if this comes forward, it’s going to be interesting debate,” he said. “I don’t know that it will make it through the subcommittee and committee process.”

Several other issues were discussed at Saturday’s forum, including school start dates and the Securing an Advanced Vision for Education (SAVE) local sales tax for school infrastructure.

The MEA will continue to hold legislative forums as the session continues. The next forum is set for 10 a.m. Saturday, March 3 at the Marshalltown Public Library, 105 W. Boone St.