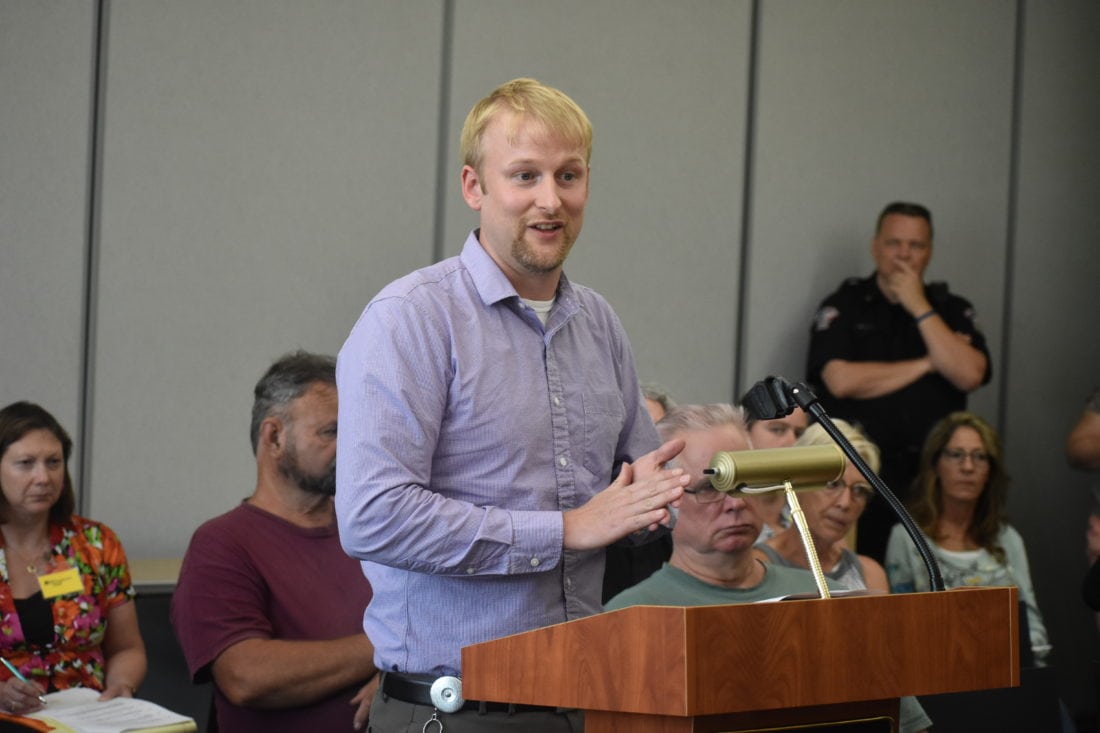 An announcement from Mayor Joel Greer that Lennox International had today pledged $500,000 and Karl Chevrolet of Des Moines $25,000 to tornado-relief efforts at the onset of Monday’s special council was met with excitement from council and attendees. Additionally, councilors voted unanimously to require out-of-area contractors to have city and state permits. Councilors also waived a variety of fees to assist residents dealing with tornado-related issues. And for the second consecutive meeting, council convened at the public library. They will be meeting there in the foreseeable future until city hall roof is repaired.

City Administrator Jessica Kinser said contractors offering tornado-recovery services would have to be registered with the Iowa Department of Workforce Developments contractor list. Additionally, contractors would have to show proof of having $1 million in insurance with the city of Marshalltown also named as additional insured.

“We kept this to a minimum of administrative oversight necessary,” Kinser said. “Registration must also be made with the city. If a contractor comes to a resident’s door, then the resident can ask for the state (Department of Workforce Development) permit and city permit.”

The language was added to a previous city ordinance in place. Councilors voted unanimously to waive the second and third readings of ordinance. Greer and Councilor-At-Large Bethany Wirin said the ordinance would be an asset in preventing illicit business practices.

After a presentation by Central Business District volunteer and President Nate McCormick,

councilors voted unanimously to re-allocate $40,000 from the Facade Grant Program this fiscal year (July 1-June 30, 2019) to the Marshalltown Central Business District. McCormick said the re-allocation was necessary to provide services to CBD members and aid them through post-tornado recovery. Re-allocation of $40,000 added to current CBD budget of $80,000 increases CBD budget to $120,000.

• Greer announced the Veterans Memorial Coliseum was found to be structurally sound. Efforts are underway to remove items destroyed. A roof will be needed next.

• Council approved unanimously a resolution allowing the purchase of three 2019 Ford Escapades from local Jensen Ford and Lincoln dealership for $22,957 each. They are specifically for the housing department to replace three damaged in the tornado. Housing & Community Development Director Michelle Spohnheimer said the vehicles were needed by staff to perform duties. Insurance on those damaged will offset some expense.

• Under a discussion line item, Kinser told councilors the City Hall Annex had been damaged in the tornado. She asked for direction on either repairing the building – currently used for storage – or removing it. Greer and other councilors said they preferred removal. The item will be placed on a future agenda for formal action.

• Councilors Cahill and Martin commended city department heads and Kinser for their work since July 19. Cahill also said the city’s appearance is much better since seven days ago. “The clean-up has been extraordinary, but there is still a lot of work to do,” Cahill said. “I appreciate all the work volunteers locally and from elsewhere, who have contributed.”

Greer singled out Habitat for Humanity chapters from Cedar Valley and Greater Des Moines, as well as Team Rubicon. The latter being made up of War on Terror veterans. They are working to help local veterans in need. Cahill and other councilors cited emergency responders at last week’s meeting.