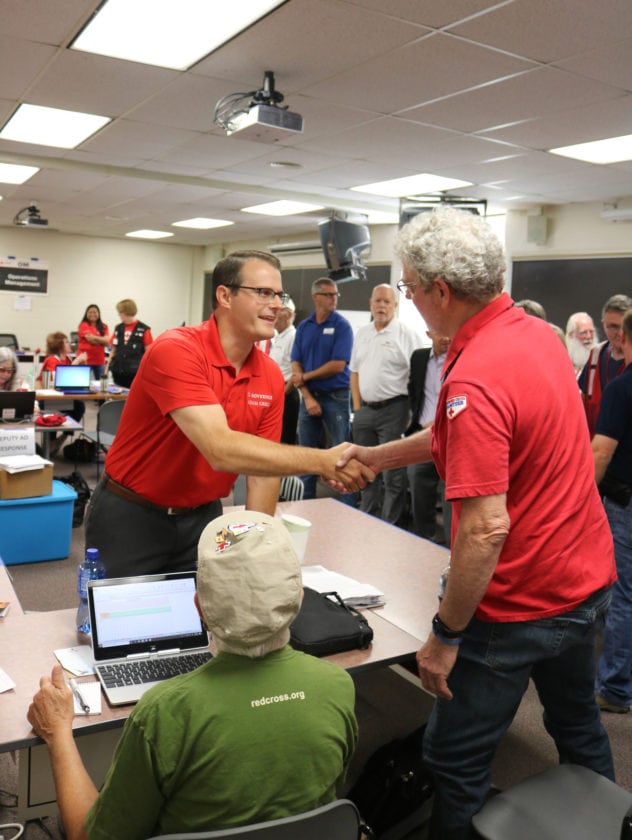 T-R PHOTO BY ADAM SODDERS - Lt. Gov. Adam Gregg, left, paid a visit to the American Red Cross Marshalltown headquarters in a Marshalltown Community College classroom Monday morning. He and other speakers thanked the organizationÕs volunteers and staff for their work to help Marshalltown recover from the July 19 tornado.

The temporary American Red Cross headquarters at Marshalltown Community College room 535 is usually abuzz with activity by 8 a.m. This morning, staff and volunteers awaited the words of local and state leaders.

Among the visitors was Lt. Gov. Adam Gregg, who previously visited Marshalltown with Gov. Kim Reynolds in the aftermath of an EF-3 tornado that tore through town July 19.

“I think about what happened here just 10 days ago, you think about that immediate aftermath and how thankful we are that there was no loss of life,” he said. “As this community works through that initial shock, the hard work of recovery has begun and continues.”

Gregg thanked the Red Cross staff and volunteers for their work almost immediately after the storm on through this week.

Several industry leaders in Marshalltown were also praised by the lieutenant governor. Gregg recognized the $200,000 donation from Emerson for disaster relief, the Lennox Industries decision to rebuild in Marshalltown, the JBS efforts to get employees back to work last week and the resilience of RACOM Corp. in keeping up emergency communications despite being hit by the storm.

“RACOM is an Iowa-grown company, and they had prepared for this … they had built that building to withstand and F-4 tornado, and when an F-3 tornado hit, it kept on going and they kept their services up without a blink of the eye,” Gregg said. “Isn’t that a metaphor for the whole community, if you think about it?”

“We wanted all of these guys with us this morning to show our appreciation,” Duree said. “I can’t say enough about the American Red Cross, your humility, your hard work, your drive and your passion for the work you do … the truth of the matter is we’re blessed to have all of you on our campus.”

He said the college has housed several agencies and services in the storm’s aftermath, having taken no damage as it tore through the north side of Marshalltown. Duree said the college is housing temporary operations for Lennox and will be holding bench trials for the court system.

Martin, a Red Crosser himself, said Marshalltown’s recovery has been about “neighbors helping neighbors” and that the city is appreciative of the Red Cross and other organizations for the support.

“From the city council and the mayor, we appreciate you and want to thank you, we couldn’t get along without you,” Martin said. “As you go and serve other places, we will remember you fondly … we really appreciate all of your work and all of your sacrifice.”

Also in attendance at the meeting were State Reps. Mark Smith, D-Marshalltown, and Dean Fisher, R-Montour, as well as State Sen. Jeff Edler.

“If I think about the disaster cycle, it’s ‘prepare, respond and recover,'” he said. “We were here last week to respond and we’re moving into other phases — we’ve started to transition into recovery and we’re going to be prepare in a big way this week.”

Baltes said his team will help prepare Iowans for the next natural disaster, replenish supplies and work to get Marshalltown-area residents familiar with the recent work of relief organizations so they have an idea of necessary activities to help the city recover.