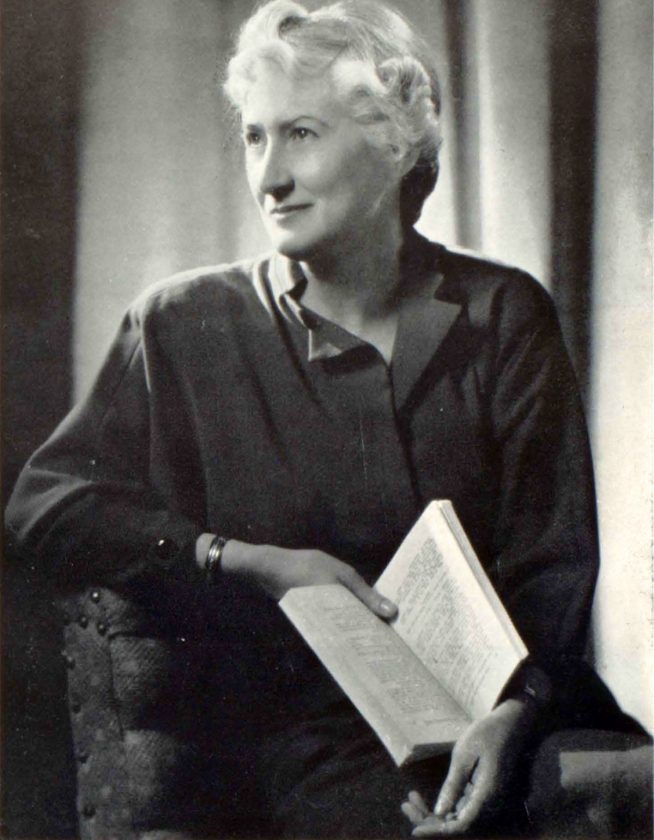 CONTRIBUTED PHOTO - Carol Houghton Dodd Hollingsworth (1899-2000) was more than a teacher and drama coach in the Marshalltown School District. She was a mentor, friend and ally to its students and faculty. A patron of the arts, she directed countless plays during her 40-plus year career in education. She famously helped guide the budding career of one of her most ambitious students, Jean Seberg. In honor of Women’s History Month, the Times-Republican reflects upon the accomplishments in her 101-year life.

Carol Houghton Dodd Hollingsworth (1899-2000) was more than a teacher and drama coach in the Marshalltown School District. She was a mentor, friend and ally to its students and faculty. A patron of the arts, she directed countless plays during her 40-plus-year career in education. She famously helped guide the budding career of one of her most ambitious students, Jean Seberg. In honor of Women’s History Month, the Times-Republican reflects upon the accomplishments in her 101-year life.

Carol was born on June 6, 1899, in Albion, the only child of Cora and Frank Houghton. At the age of 3, the family relocated to Marshalltown where she attended Arnold School. As a child, then later as an adult, she was active with the YMCA, serving as an adviser to the Girl Reserves of the YWCA.

The summer following graduating from college, Carol toured with the Chautauqua theater company, performing in plays in the Dakotas, Minnesota and Iowa.

She returned to Central Iowa and secured a teaching position at Grundy Center High School, where she taught English, French, speech, drama and physical education for 11 years. Then in 1932, she moved to Marshalltown to be closer to her mother who was widowed. She took a job teaching in the city’s elementary schools. Also that year, she directed the community theater play “The Torchbearers.”

Two years later, she made a shift in her career, splitting her time teaching economics and English in the high school in the morning hours, and speech in the junior high school in afternoons. She also directed plays at Marshalltown Junior College (now Marshalltown Community College).

According to the book “The Continuing History of Marshall County,” Carol struggled to make a living earning $100 for the entire school year, so “she sold the car and walked from her home on North 11 Street to the South 11 Street high school and on to the First Avenue junior high school.”

In 1957, she married Ralph Dodd. Transitioning to solely teaching at MHS, Carol was known throughout the halls as “Mrs. Dodd.”

Carol sponsored the Pep Club at MHS, as well as the school’s drama club — Masque and Dagger. Under her leadership, the drama club presented three, full-length plays a year and also several one-act plays. Members received masks, pins and certificates for earning a high number of points, according to the 1964 MHS “Post Script” yearbook.

MHS’s 1950 yearbook was dedicated to Carol: “For your tireless effort, the understanding and time that you devote to all departments and activities, to you, Carol Houghton, we, the class of 1950, dedicate our edition of Post Script.”

“I had a bad habit of using my hands way too much and she tried to get me to stop doing that. She was a wonderful teacher,” Elledge said. “I also remember her having a great wardrobe — always stylish.”

Teaching English, French, Latin and drama classes didn’t slow down her drive. She worked to advance the career of pupil Jean Seberg.

“What a great teacher and lady,” student Nancy Behn said. “She directed Jean Seberg in ‘Sabrina’ (in 1956) when I was a junior. It was a great production. My group went to districts in Des Moines with the one-act play ‘Cabbages.’ I had a great time — only got Honorable Mention, but it was fun. She was tough, but fair and you knew she cared.”

Carol secured a scholarship for Jean to work in summer stock in Massachusetts and New Jersey. In the meantime, a global talent search was underway to cast the lead in Hollywood director Otto Preminger’s 1957 film “Saint Joan.”

Bill Fisher, head of Fisher Controls, believed Jean was right for the role to play the martyred character. He and Carol submitted Jean’s name for the contest.

“I was the fourth person to recommend Jean. Her summer stock group in the East also submitted her name, and she knew it. But I get either the ‘credit’ or the ‘blame,’ when actually I was the low man on the totem pole,” Carol later said.

The popular instructor received the 1961 Teacher of the Year Award, presented annually by the Industrial Bureau of the Chamber of Commerce.

Beginning in 1957, the Masque and Dagger drama club honored one outstanding senior member with the Jean Seberg Award. It held a special dinner where the “Elmer” awards were presented. The last Seberg award was given in 1985. In 2012, the IVCCD Orpheum Theater Center teamed with MHS to present the Jean Seberg Drama Award, given each fall at the Jean Seberg Festival.

During the 1963-64 school year, Carol retired. The last play she directed at the high school was “First Lady.” Afterwards, she was given a music box as a parting gift.

Although retired, friend Ed Wright, chairman of the Theater Department at Denison University in Ohio, persuaded her to accept a position teaching drama interpretation and theater appreciation. She performed at Armed Forces Special Services tours of Europe, also accompanying the Denison Players to Japan and Korea. Carol received the Department of Defense Certificate of Esteem and the U.S. Forces Far East Jolson Medal.

She was widowed in 1967, but still decided to attend her 50th class reunion by herself. It was there she rekindled a romance with high school sweetheart James Raymond “Si” Hollingsworth, who was also widowed. The pair wed and resided in Gilman. Hollingsworth died in 1977.

“When I came to Marshalltown, Carol called me and asked me to visit her in Gilman. (My wife) Cheryl and I went there and had a wonderful afternoon. She wanted to see what I had planned with the drama department,” he said. “I told her my philosophy and plans for some of the programs I would do. She was exceptionally supportive and gave me her Jean Seberg autograph that Jean gave her on one of her visits to Marshalltown. She was always very gracious and welcoming to my calls and questions.”

On Nov. 13, 2000, she died of congestive heart failure at the Mayflower Home Health Care Center in Grinnell. Her body was donated to the Osteopathic College of Medicine Department of Anatomy in Des Moines.

She was survived by a stepson, James Hollingsworth and stepdaughter Joan Wetherell. She is buried in the Prairie View Cemetery in Gilman.