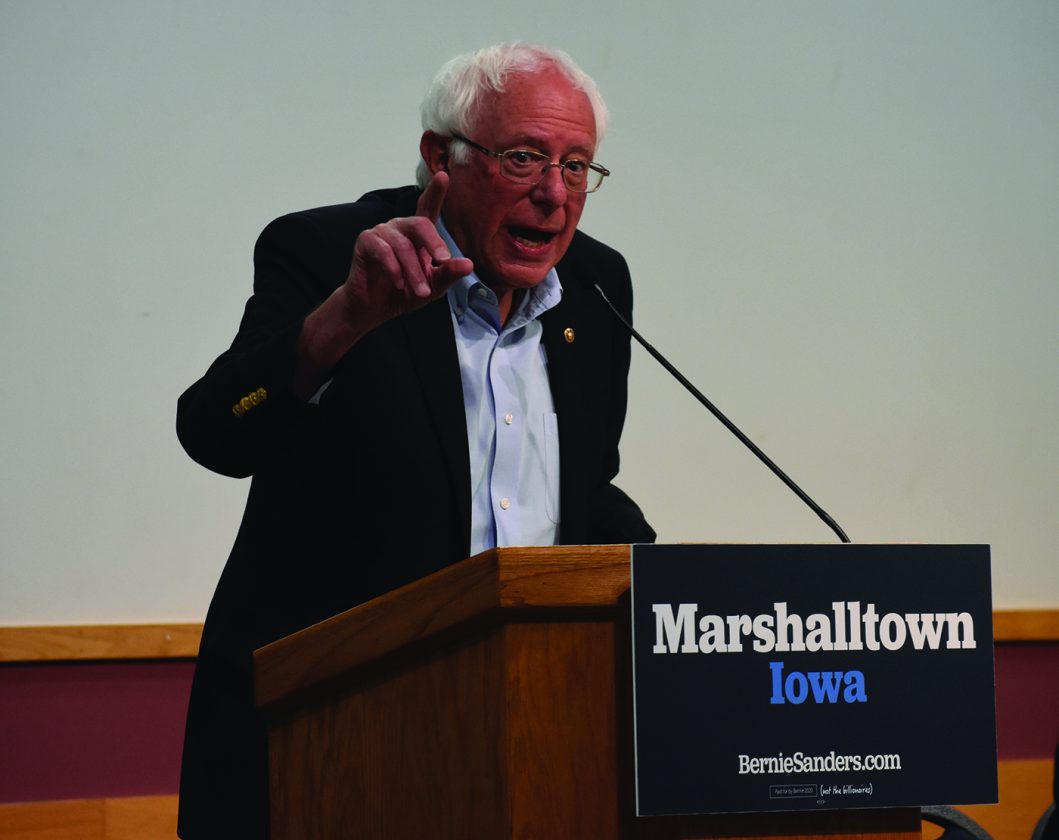 The ebullient Sanders, who lost Iowa by a whisker to Secretary Hilary Clinton on caucus night 2016, but won Marshalltown by 8 percentage points, had the crowd of approximately 200 on their feet several times during the 90-minute town hall meeting.

Helping Sanders talk about health care were four panelists from different parts of the state who joined him at Dejardin Hall at Marshalltown Community College.

The high cost of prescription medicines were a key complaint.

“What is to stop a pharmaceutical company from raising the cost of your medicine, two, three or four times what they cost now?,” Sanders asked the crowd. “They do it at will. The pharmaceutical industry recently made $69 billion in profits.”

Sanders said when he is in the White House he will work to cut prescription costs by 50 percent.

He cited Canada’s health care systems as a model the U.S. should exemplify.

“I took several women from Vermont suffering from breast cancer who required a certain medication,” he said. “We drove the 50 miles from St. Albans, Vermont, a working class town, into Canada. We were able to purchase their medications for one-tenth of the cost of what some are paying in the U.S.”

While many in the crowd held Bernie signs and cheered him on during his remarks, others in the audience have not made up their minds with the Feb. 3, 2020 caucus nearly eight months away.

“I have not decided on a candidate,” former Marshall County Supervisor Denny Grabenbauer of Marshalltown said. “I am here with my granddaughter Abby. We wanted to come and see what Sanders’ campaign is all about.”

However Theresa Walton of Marshalltown is a strong Sanders supporter.

“I am for Sanders,” she said quickly. “I was for him in 2016. I supported him on caucus night and volunteered for his campaign. My husband was a Sanders delegate.”

“My sister lives in Vermont, and we have known of his (health care) record for quite some time. He irritates a lot of people because he has some good ideas. But health care … they have done well with that in Vermont and health care is a major issue in this country.”

Andy Heintz of Marshalltown said he is deciding between Sanders and U.S. Sen. Elizabeth Warren who is also vying for the Democratic Party’s nomination.

The event was covered extensively by the national and state media, according to Sanders campaign staff.

Television cameras from ABC, NBC and CNN were set up in the back of the room as well as reporters from the New York Times.

Sanders is officially an independent in the U.S. Senate but caucuses with Democrats.

Despite an outdoor campaign stop in Des Moines before coming to Marshalltown, Sanders still had a lot of energy after the town hall concluded.

“Anyone who wants a selfie, come on up,” Sanders said as he walked off stage.

A crowd rushed forward to take him up on the offer.