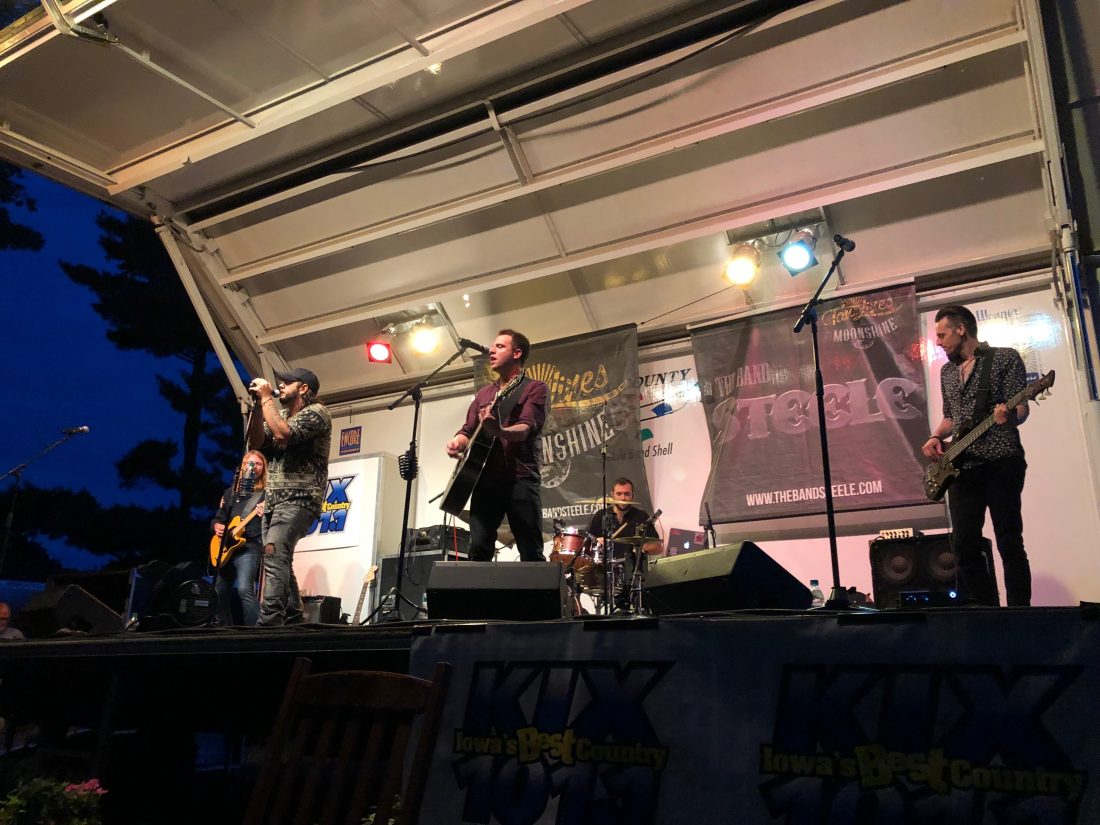 The sounds of country music blared from the Central Iowa Fair stage as The Band Steele put an exclamation point on the end of three days of fair festivities Saturday evening.

That show drew a large crowd, as did the several other livestock, craft and arts displays up at the fairgrounds Saturday as the 114th Central Iowa Fair came to a close.

“This year, the weather has cooperated. Last year we had a big rain on Friday and that took out the races on Friday night,” said fairgrounds office manager Shannon Espenscheid. “We moved the races to Thursday night this year to kick things off and had a live band (Friday) night and a bags tournament.”

Recent BCLUW graduate and longtime fair participant Leah Mosher had already done all of her events by Saturday, but was still checking out the festivities. She said there are two main reasons so many people come to the fair.

“I think the first one is to see livestock. Not a lot of people, especially in the Marshalltown area, get to see livestock all that much. This is a great opportunity for them to get connected with agriculture,” Mosher said. “I think the other reason is the people. We’re fortunate enough to be surrounded by a really great community.”

Earlier this week, Mosher showed off everything from homemade quilts to beef cattle she raised for showing.

Fellow fair participant Ethan Espenscheid, one of Shannon’s sons, also said the camaraderie is a big draw of the fair.

“I think I enjoy coming out and hanging out with friends,” he said. “At the same time, you’re getting out and meeting new people who share the same interests as you do. We change stuff up every year, we have new stuff come in.”

Ethan said the mud volleyball tournament that began last year is one of his favorites.

“It’s mainly families that come out. I know the kids like to come out and see the livestock,” he said.

“I’m part of the East Marshall FFA and I show my goats. I’ve shown them since I was in fifth grade,” she said. “Basically, you get up, do chores every morning, then you take them for a walk. They’re pretty low maintenance for the most part.”

Duncan said she likes people-watching and participating in the many activities offered at the fair.

“It’s kind of a change of pace for most people. It’s something they don’t see all the time, so when they do get the opportunity they want to take advantage of it,” Duncan said.

Shannon Espenscheid and fair board Vice President Jodi Breniman said fair leaders are moving the festivities into the future.

“We’ve had nothing but good comments about how much our show facilities as a whole have improved, along with our show pavilion and our activity building,” Breniman said. “We’re on the upswing. We’re going strong with a lot more activities.”

Fair events wrapped up Saturday and exhibitors will be working to clean up their areas Sunday morning. Many will be preparing for the state fair in a few weeks’ time.