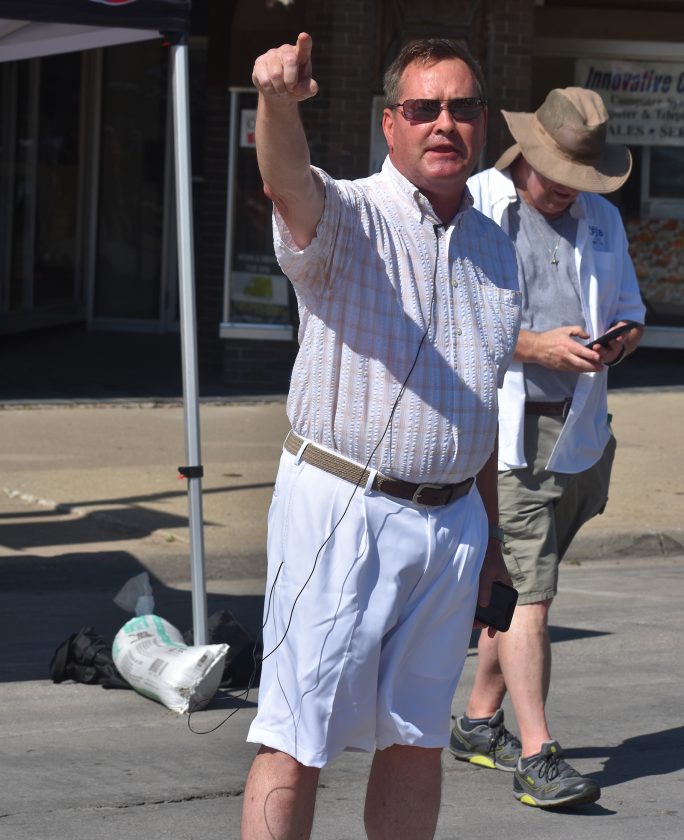 Marshalltown residents had to show strength after the July 2018 EF-3 tornado damaged homes, businesses and other structures.

The rallying cry of “Marshalltown Strong” was as strong as ever Friday as Marshalltown residents remembered the dreadful day a year ago and celebrated the immense recovery effort that has been ongoing ever since.

“The amazing thing is that a year ago at this time, this place looked like a war-zone,” said Marshalltown Schools Superintendent Theron Schutte amid a sea of red shirt-clad volunteers at Woodbury Elementary School Friday morning.

The tornado hit the Woodbury neighborhood in northeastern Marshalltown hard. The school has mostly recovered, but the hundreds of houses hit in the vicinity are still recovering.

About 300 volunteers showed up at the school to build a brand new playground for the neighborhood, an effort sponsored by a $50,000 KaBOOM! grant, as well as Keurig/Dr. Pepper and Fareway Stores Inc. 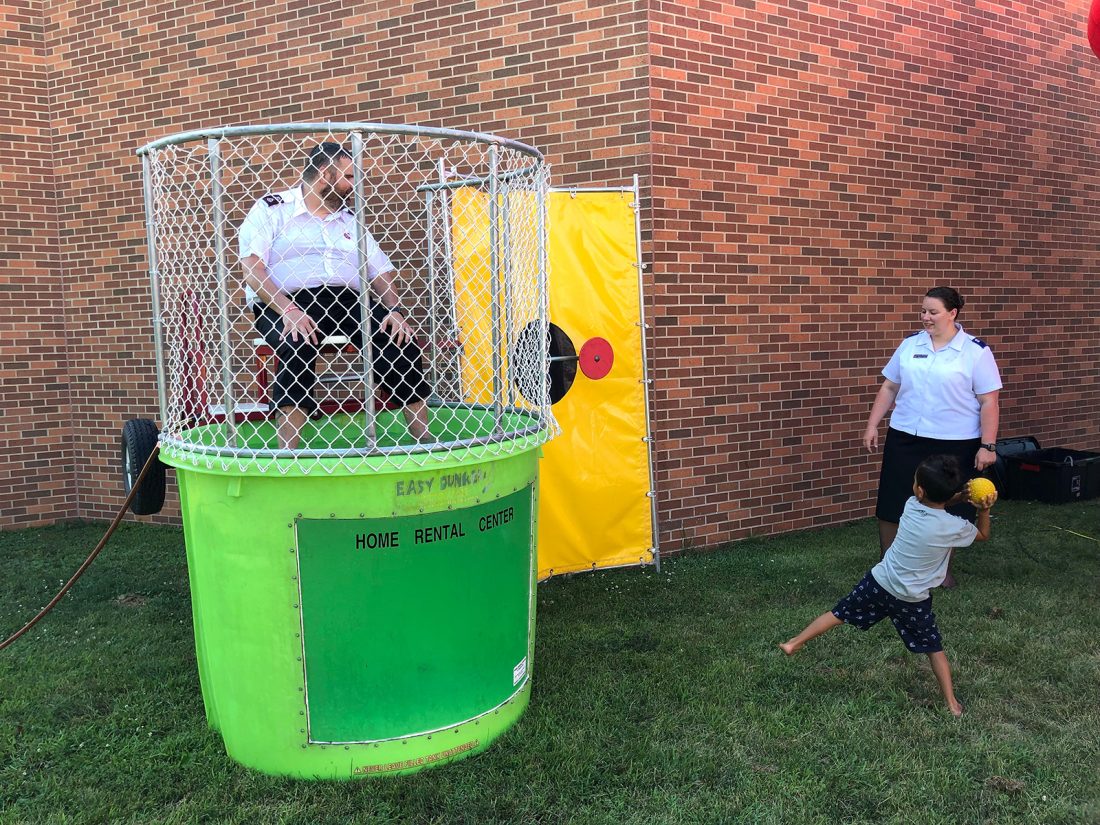 Schutte said a similarly gargantuan volunteer force showed up to clean up trees, building debris and help tornado victims a year ago. This time, the volunteers got to build something long-lasting for the community to enjoy.

He said it was an amazing sight to see.

Cristina Perez, KaBOOM! project manager, said she was impressed by Marshalltown’s response to the call for volunteers for the project. About 100 more volunteers turned out than the number originally requested.

The volunteers formed into groups, some building the playground base, others moving mulch to the swing-set area, and still others painting pictures of the United States map, world map and a giant Marshalltown “M” on the hot asphalt. 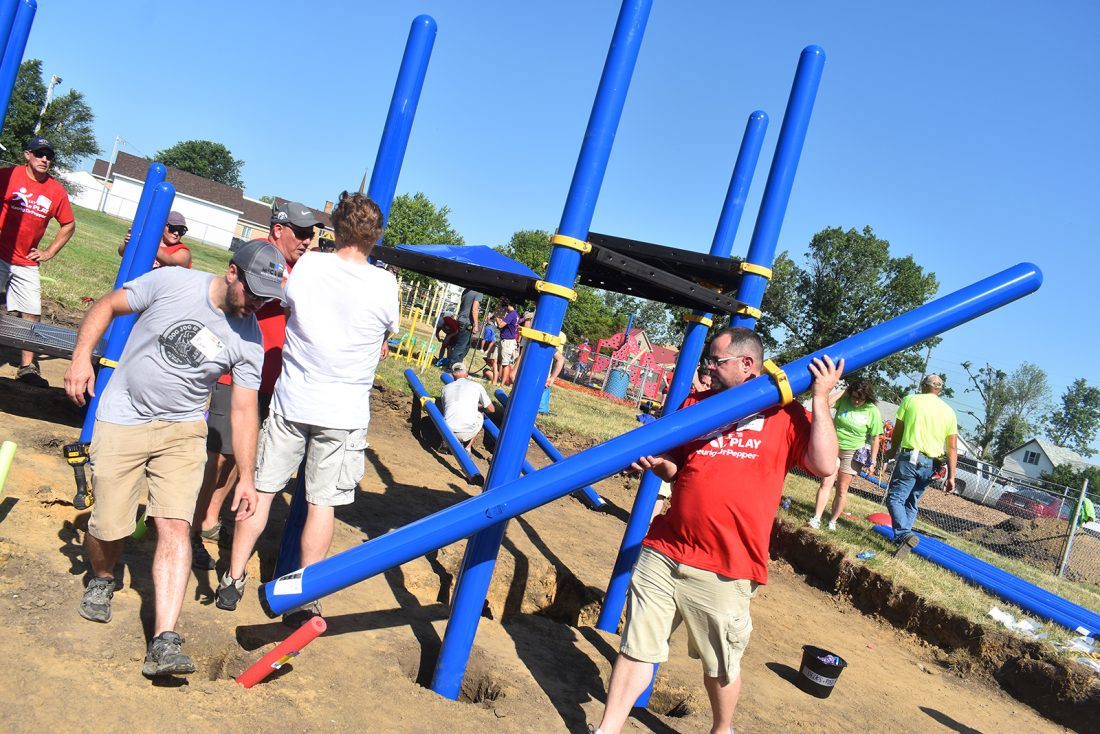 T-R PHOTO BY ADAM SODDERS
A group of volunteers builds the base for the new Woodbury Elementary playground.

MHS sophomore Lily Roberts said she was happy to see so many people out doing hard work in the heat warning-level weather Friday.

“I think it’s a good thing that everyone came out to help,” she said, shading in California on the U.S. map painting. “I think it’s great for the community to get together.”

The oppressive heat didn’t stop a sizable crowd from gathering in downtown Marshalltown to the north of the Marshall County Courthouse Friday afternoon, though the onlookers did gather into the little shade available.

They gathered for an ice cream social sponsored by the city, the Marshalltown Area Chamber of Commerce, JBS and the North Third Avenue Dairy Queen. Free Dilly Bars were handed out to visitors, but they had to be eaten quickly or else turn into a chocolate-and-vanilla puddle on the sidewalk.

“This turnout is another example of how Marshalltown is strong, and people show up when it’s important,” said Marshalltown Mayor Joel Greer, addressing the crowd.

He then pointed straight ahead at the courthouse.

“That is the prettiest courthouse in Iowa … it really looks hurt now, but wait until you see what it’s going to look like when it opens,” Greer said.

Not only is the courthouse going to be better than ever, he said, but the restaurants and stores damaged by the storm have come roaring back and are experiencing incredible success.

Chamber President and CEO Lynn Olberding said the ice cream social was held to bring a celebratory mood to the day.

“We wanted to do something on the anniversary of the tornado as a way for people to gather and to celebrate how far we’ve come in the last year,” she said. “We thought What better way to do that than an ice cream social?'”

After remarks were made, the crowd grew quiet and, through the stiff wind down Main Street, began to hear the sound of church bells from St. Paul Episcopal Church, which kicked off a sounding of bells in remembrance of the minutes the tornado wreaked havoc.

That celebratory mood was also captured at a carnival-style event on State Street Friday afternoon, held by The Salvation Army of Marshalltown.

“We wanted to celebrate a year of recovery and rebuilding here in Marshalltown on the day after the tornado,” said Salvation Army Capt. Pam Kasten. “It’s completely free to the community.”

The Salvation Army was one of the many local organizations on the front lines of the tornado recovery effort.

“It’s just to take our focus off the bad stuff that happened a year ago today and focus on the good that’s happened since then,” Kasten said.

The event gave kids a chance to play many different games, from a dunk tank to bowling to a bounce house.

Rapha Reins was on-hand to provide horses and ponies for children to pet, and there were plenty of food vendors to keep visitors full and cooled off in the late afternoon heat.

T-R PHOTO BY ADAM SODDERS
A group of volunteers builds the base for the new Woodbury Elementary playground.