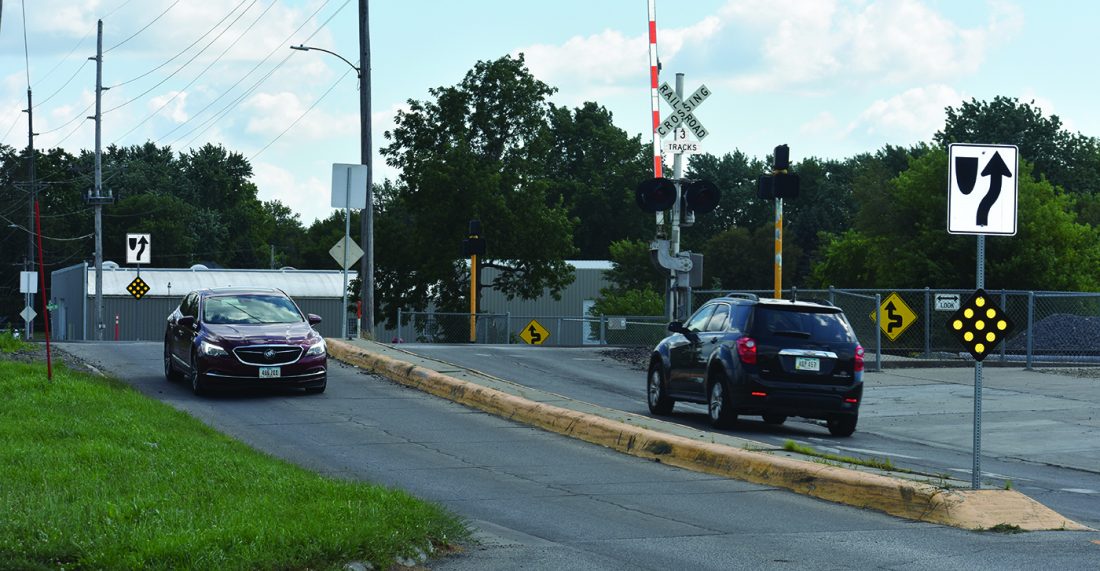 PHOTO BY MIKE DONAHEY Looking south, a vehicle has crossed and another prepares to cross the three tracks making up the 12th Avenue Union Pacific Railroad crossing Monday.

The estimated 656 locomotive horn blasts per day from 41 freight trains moving through Marshalltown may be an impediment to residents wanting to live downtown.

“Overall, outside the downtown master plan, this is something we look at as a quality of life issue,” Kinser said.

Project Manager Greg Broussard of Bolton & Menk told the council each train engineer is required to blow the horn four times to warn motorists and pedestrians when approaching a railroad crossing. With crossing over the Union Pacific Railroad tracks at 12th Avenue, Second Street, Sixth Street and 12th Street the number of horn blasts to warn motorists and pedestrians add up, Broussard said. He told the council they have the option of implementing “Quiet Zones” which would prohibit locomotive engineers from blowing the horns unless they believe there is imminent danger ahead.

However, as part of the Quiet Zone implementation, the city would have to pay the Union Pacific Railroad company for an estimated $1 million to make adjustments at the four crossings. Kinser said the city has options to use different resources to come up with the funds should council approve.

The city is required to pay the UPRR since the crossings are on the railroad right-of-way. The crossing at 12th Avenue was modified a number of years ago as a Quiet Zone with special street medians and more adjustments.

“The Quiet Zone discussion was initiated in 2010, when the city hired Bolton & Menk to conduct a Quiet Zone study or review of safety improvements for railroad crossings at Second, Sixth and 12th Streets,” Kinser said in a memo to the council. “A project to install a median along Sixth Street moved forward, but was turned down by the city. No further discussions were had until 2017, when the city contracted with Bolton & Menk to update the 2010 study. The scope was included to add 12th Avenue, which is improved, but still required review for any updates in improvements. Bolton & Menk concluded their report in mid-2018. This was set to come before the Council in 2018, but was put on hold due to the tornado. Since 2018, we now have a new Downtown Master Plan which recognized that the train noise could be an impediment to downtown living. While the Quiet Zone would impact the crossings, it does not have an impact on the UPRR yard, so it will not eliminate all train noise.”