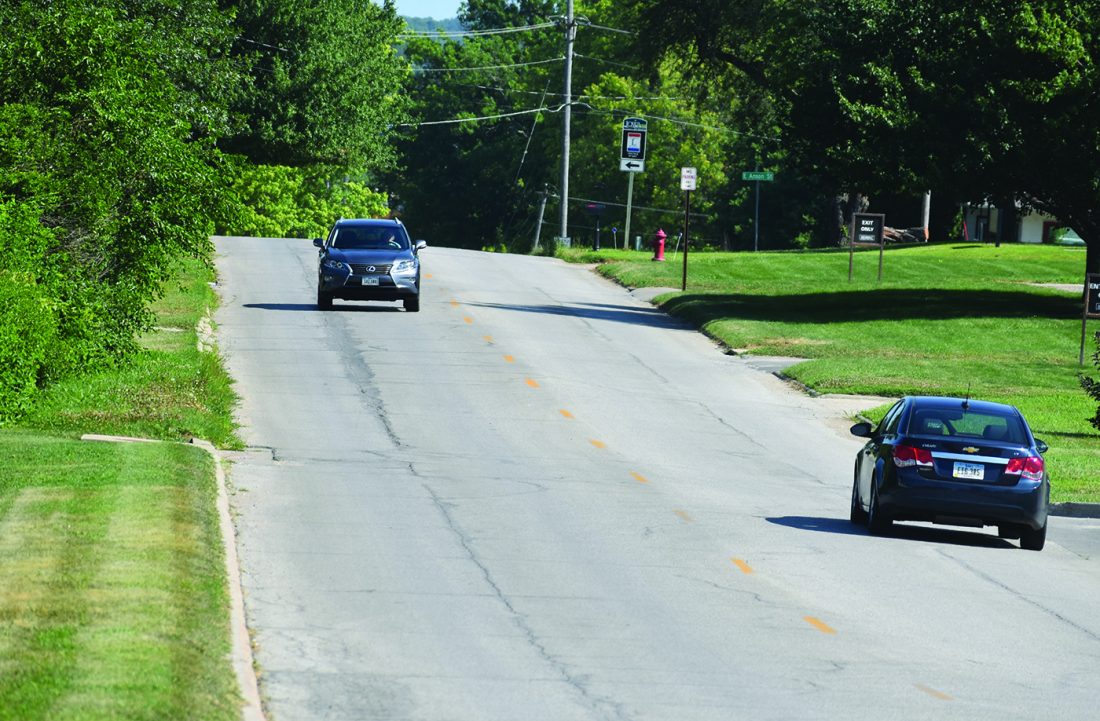 T-R PHOTO BY MIKE DONAHEY Looking north, vehicles travel in the 900 block of South 12th Avenue. The Marshalltown city council is debating to install or not install sidewalks on the busy street and others in the vicinity. Currently, pedestrians must walk in the street or on private property.

City Public Works Director Justin Nickel, as well as a number of 12th Avenue-area residents and businesses, want to know the answer from the Marshalltown city council.

Councilors and Nickel spent a significant amount of time at the meeting discussing pros and cons of the project which he estimated would cost $1 million with construction beginning sometime in 2020.

Installation of sidewalks would keep pedestrians out of harm’s way. If approved by council, the project would install a sidewalk five-feet wide on the east side of 12th Avenue, including in front of the Emerson Process Management Governor Road facilities, as well as other streets without sidewalks near 12th Avenue, such as South Street. A bicycle path eight-foot wide would be installed as well in the area and on adjoining streets.

Since the heavily trafficked street has no sidewalk, pedestrians must walk on the street or on property owner’s driveways and yards. At least two area residents have been hit by vehicles while walking in the street or nearby, according to comments made at the meeting.

The proposal to install sidewalks on the east side of 12th Avenue was met with opposition by two 12th Avenue business owners.

Scott and Kari Kilstrom, owners of Electric Supply of Marshalltown, 1008 S. 12th Ave. and Mike and Kelly Steffen of Steffen & Associates, 902 S. 12th Ave. were present and asked the council to reconsider — by placing sidewalks or bike paths on the west side of 12th Avenue.

Kari Kilstrom said she feared for the safety of pedestrians who might be walking on a sidewalks near their business when semis are pulling in and out of the businesses’ driveway. Kelly Steffen said they had moved the business from a tornado-damaged structure to 12th Avenue, and were completely unaware of the city’s sidewalk plans until recently.

Councilor At-Large Leon Lamer said he had never seen any Emerson Process Managment/Fisher Controls employees “out walking” near their facilities in the 1700 block of South 12th Avenue.

No formal decision was made, but the council asked the proposed project be placed on the 5:30 p.m., Aug. 12 council meeting agenda.