Leave the US, Trump tells liberal congresswomen of color 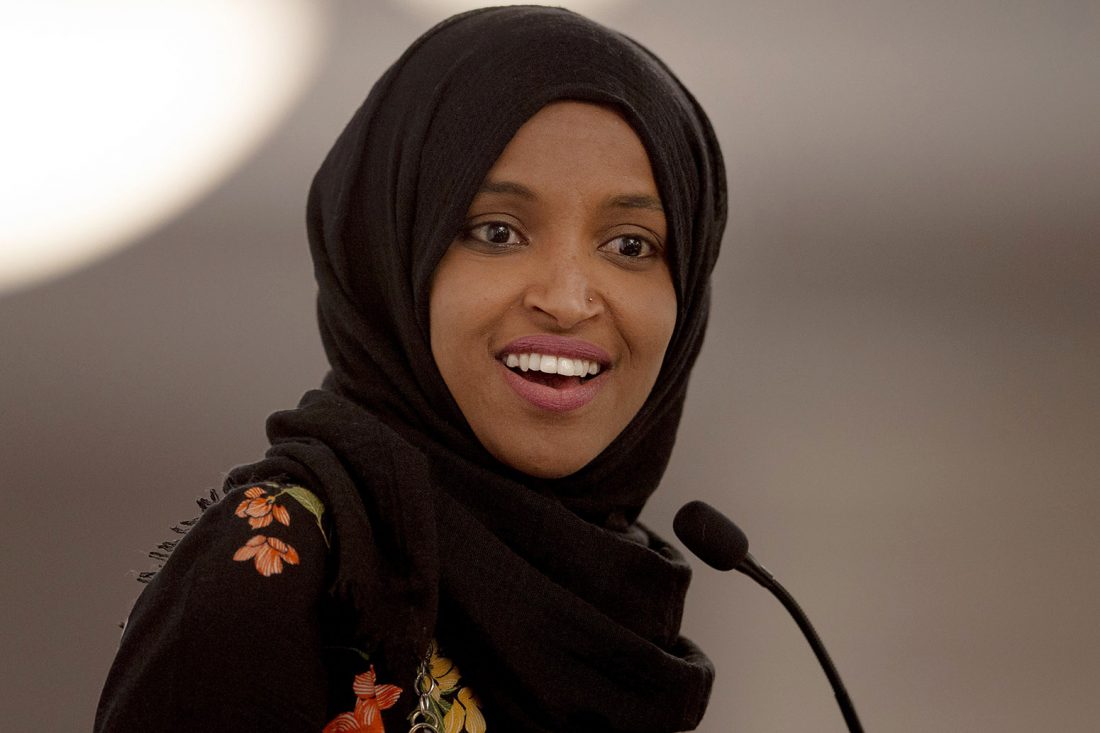 FILE - In this May 18, 2019, file photo, Rep. Ilhan Omar, D-Minn., speaks during the fourth annual Citywide Iftar Dinner in Austin, Texas. In tweets Sunday, President Donald Trump portrays the lawmakers as foreign-born troublemakers who should go back to their home countries. In fact, the lawmakers, except one, were born in the U.S. He didn’t identify the women but was referring to Reps. Alexandria Ocasio-Cortez, Ilhan Omar, Ayanna Pressley and Rashida Tlaib. (Nick Wagner/Austin American-Statesman via AP, File)

WASHINGTON — Starkly injecting race into his criticism of liberal Democrats, President Donald Trump said Sunday that four congresswomen of color should go back to the “broken and crime infested” countries they came from, ignoring the fact that all of the women are American citizens and three were born in the U.S. His attack drew a searing condemnation from Democrats who labeled the remarks racist and breathtakingly divisive.

Following a familiar script, Republicans remained largely silent after Trump’s morning broadsides against the four women. But the president’s nativist tweets caused Democrats to set aside their internal rifts to rise up in a united chorus against the president.

Trump, who has a long history of making racist remarks, was almost certainly referring to Ocasio-Cortez and her House allies in what’s become known as “the squad.” The others are Reps. Ilhan Omar of Minnesota, Ayanna Pressley of Massachusetts and Rashida Tlaib of Michigan. Only Omar, from Somalia, is foreign-born.

Ocasio-Cortez swiftly denounced his remarks . “Mr. President, the country I ‘come from,’ & the country we all swear to, is the United States,” she tweeted, adding that “You rely on a frightened America for your plunder.” Omar also addressed herself directly to Trump in a tweet, writing: “You are stoking white nationalism (because) you are angry that people like us are serving in Congress and fighting against your hate-filled agenda.”

With his tweet, Trump inserted himself further into a rift between Pelosi and Ocasio-Cortez, just two days after he offered an unsolicited defense of the Democratic speaker. Pelosi has been seeking to minimize Ocasio-Cortez’s influence in the House Democratic caucus in recent days, prompting Ocasio-Cortez to accuse Pelosi of trying to marginalize women of color.

“She is not a racist,” Trump said of Pelosi on Friday.

“So interesting to see ‘Progressive’ Democrat Congresswomen, who originally came from countries whose governments are a complete and total catastrophe, the worst, most corrupt and inept anywhere in the world (if they even have a functioning government at all), now loudly and viciously telling the people of the United States, the greatest and most powerful Nation on earth, how our government is to be run,” he tweeted.

“Why don’t they go back and help fix the totally broken and crime infested places from which they came. Then come back and show us how it is done.”

He added: “These places need your help badly, you can’t leave fast enough. I’m sure that Nancy Pelosi would be very happy to quickly work out free travel arrangements!”

The attacks may have been meant to widen the divides within the Democrat caucus, which has been riven by internal debate over how far left to go in countering Trump and over whether to proceed with impeachment proceedings against the president. Instead, the president’s tweets, which evoked the trope of telling black people to go back to Africa, brought Democrats together.

“Let’s be clear about what this vile comment is: A racist and xenophobic attack on Democratic congresswomen,” tweeted Sen. Elizabeth Warren, a Democratic presidential candidate.

Another 2020 contender, former Texas Rep. Beto O’Rourke, tweeted at the president: “This is racist. These congresswomen are every bit as American as you — and represent our values better than you ever will.”

Few Republicans weighed in on the president’s comments. Congressional leaders, including Senate Majority Leader Mitch McConnell, did not respond to requests for comment, nor did Sen. Tim. Scott of South Carolina, the only Republican black senator.

Mark Morgan, the acting commissioner of U.S. Customs and Border Protection, in a previously scheduled appearance on “Face the Nation” on CBS, said only: “You’re going to have to ask the president what he means by those specific tweets.”

Shortly after the tweets, and a later presidential post defending the harsh scenes at a border detention facility where hundreds of migrant men are being held in sweltering, foul-smelling conditions, Trump left the White House to go golfing at his Virginia club.

Trump appeared unbowed Sunday night when he returned to Twitter to say it was “so sad” to see Democrats sticking up for the women. “If the Democrat Party wants to continue to condone such disgraceful behavior,” he tweeted, “then we look even more forward to seeing you at the ballot box in 2020!”

It was far from the first time that Trump has been accused of holding racist views.

In his campaign kickoff in June 2015, Trump deemed many Mexican immigrants “rapists.” In 2017, he said there good people on “both sides” of the clash in Charlottesville, Virginia, between white supremacists and anti-racist demonstrators that left one counter-protester dead. Last year, during a private White House meeting on immigration, Trump wondered why the United States was admitting so many immigrants from “shithole countries” like African nations.

Repeatedly, Trump has painted arriving immigrants as an “infestation” and he has been slow in condemning acts of violence committed by white supremacists.