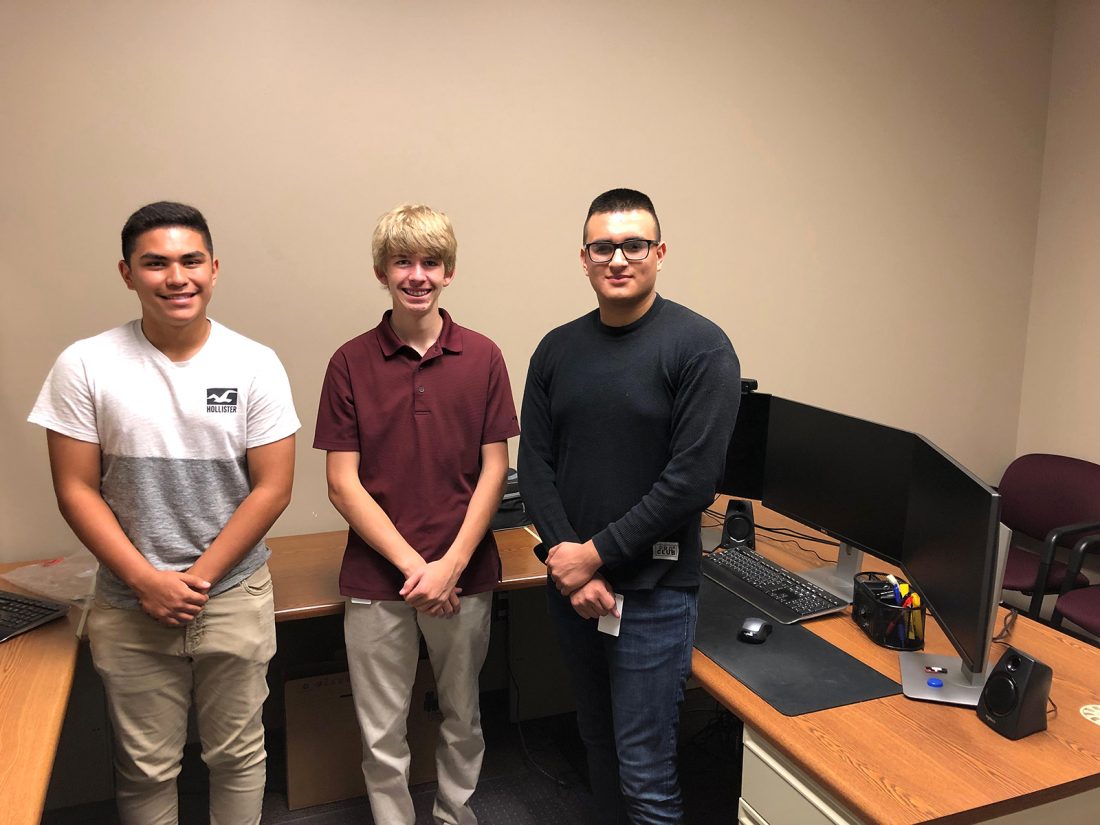 High schoolers’ lives are busy, from academics and extracurriculars to family, social and work obligations, and some students are putting in extra effort to forward their careers at local businesses.

Three Bobcats are increasing their knowledge of computer technology at Marshalltown Company. Marshalltown High School Class of 2019 graduates Felipe Bautista and Samuel Estrada have been working as interns since they were in high school, and sophomore Austin Christen is following in their footsteps.

“I’ve been working here for about eight months,” Bautista said. “At first, I started by setting up offices and moving people around. Every time there was a new employee, I set up their account and I make sure they have all the equipment they need to get started right away.”

Estrada said he does similar work. He has been an intern with Marshalltown Company for more than a year.

“I do kind of similar things – setting up offices, getting accounts ready for new users – and then some long-term projects that we do, researching different (software) programs we could use at the company,” he said.

Christen is also doing a lot of work helping set up company employee’s offices with the necessary computers and technology they need to do their jobs.

“Lately, I’ve been doing a lot of hardware swapping, like if someone needs a new hard drive, or like I did a battery the other day,” he said.

Marshalltown Company IT Director Jeff Schneider said the interns help with important tasks around the office. He said they are good troubleshooters and solve problems when computer equipment isn’t working.

“These guys already come to us with a lot of passion for technology and we like to foster that,” Schneider said. “Hopefully someday we get the chance to hire them full-time.”

Marshalltown High School Principal Jacque Wyant said such internship opportunities go along with the school’s Bobcat Ready initiative with a goal of getting students prepared for their post-secondary education or careers.

“The internship is one of those ways for students to get to know more intimately the workings of the businesses in our community,” Wyant said. “Hopefully, they’ll come back to the community and build their family here and stay here. That’s a big piece of Bobcat Ready.”

Emerson is another company that takes interns.

“Essentially, they’re partnered up with different teams in the organization and working with what those people in different roles every day,” said Emerson Recruitment and Diversity Specialist Jill Wellman.

She said interns get an opportunity to explore the different aspects of both administrative services and manufacturing.

The three interns at Marshalltown Company said they have gotten a lot out of their time at the business.

“I feel like I’ve learned a lot more than what I started with in just the little time I’ve been here,” Austin said. “I’ve also gotten a lot better at my people skills – talking to people, going around to different offices, asking people what they need help with.”

Estrada also said the internship opportunity has been valuable.

“Mostly, (I’ve been) learning how to budget time,” he said. “They give us the projects, but we’re supposed to manage how we do it daily, and keeping yourself accountable and getting that stuff done on time.”

Austin said he is still deciding which path to take after he graduates high school, but said it will likely be either mechanical engineering or engineering in a computer science area.

Estrada and Bautista are both set to start at Iowa State University this fall.

Bautista said he is going into a similar area of study – software engineering.

“When I started working here I started liking computers more and more,” he said.

Internships are one of many ways in which local students can get in touch with area businesses and learn about career options. School visits by professionals, job shadowing, apprenticeships and more are other ways in which Marshalltown students are able to get familiar with the opportunities and happenings in their community.