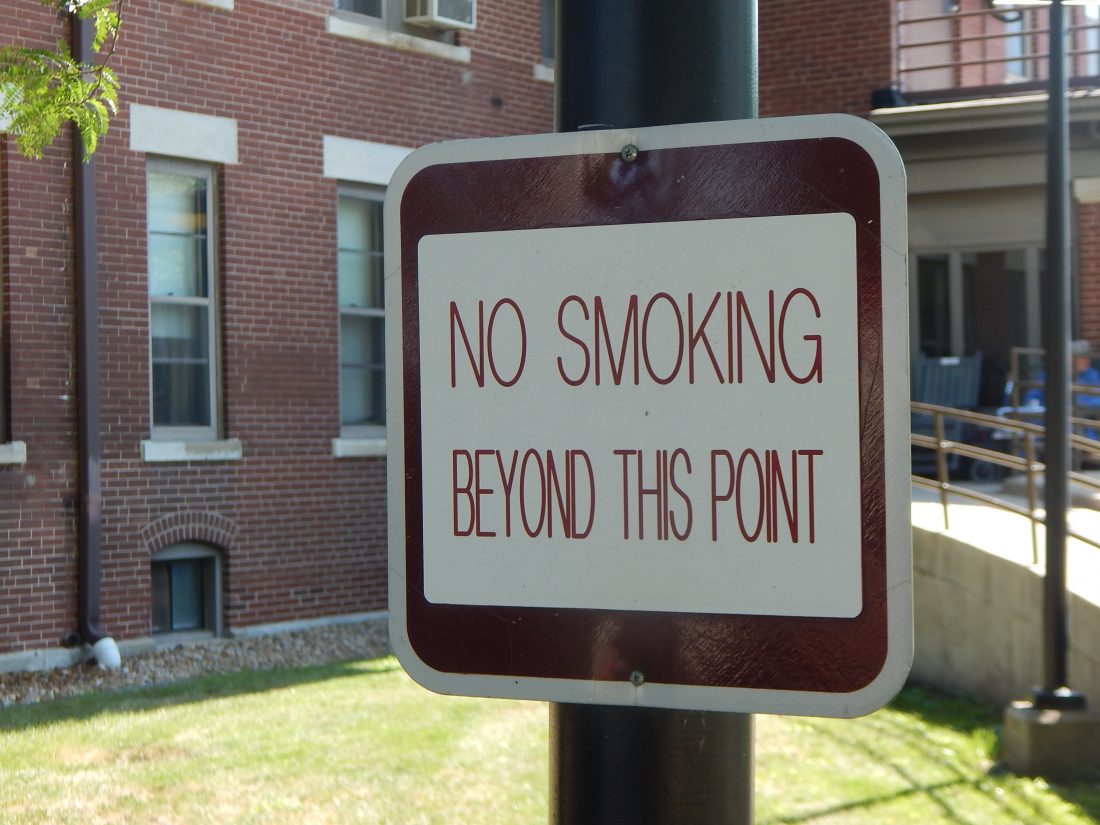 T-R PHOTO BY MIKE DONAHEY
A “No Smoking” sign directs Heinz Hall residents where smoking is allowed on the facility’s west side.

A recent Veterans Administration-mandated smoking policy implemented at the Iowa Veterans Home has generated some complaints from veterans.

“The VA completed their annual inspection of our facility and informed us of a new smoking policy to be implemented immediately,” Oujiri said.

Oujiri said procedures were put in place at once to ensure safety of residents who smoke, as well as the safety of other residents and staff.

“Smoking, including electronic cigarettes shall be permitted in designated supervised areas only and prohibited when oxygen is in use,” Oujiri said.

1. Smoking is not permitted by residents in any facility building, entrance, hallway, restroom, public area or where oxygen is used or stored, except for the smoking rooms located on the Malloy Hall main floor, Dack Hall main floor and Heinz Hall first floor north lounge. All other units and inside areas have been designated as completely non-smoking.

2. Outdoor smoking is allowed for Heinz Hall residents only at the bottom of the main entrance ramp. This is unsupervised.

4. All oxygen equipment must be turned off and removed to a distance of a least 10 feet from any smoking area.

5. Residents who smoke will sign “Safety Expectations for Resident Smoking” on admission and with any incident identified.

In general, smoking is not allowed while in any state vehicle, on medical trips or on recreation trips. Smokers are required to clean up their own litter. Smoking materials are never to be discarded in trash cans.

Oujiri said he knows the new rules have bothered some of the smokers on campus, but said they were implemented with safety in mind. The new policy says trained IVH staff will assist smokers with smoking reduction and cessation.

State Rep. Mark Smith, D-Marshalltown, a long-time IVH volunteer and veteran affairs advocate, said he has received several calls from World War II and Vietnam War veterans who do not agree with the new policy.

“They see it as a right to smoke and something a lot of them started in the service,” Smith said. “This (new policy) was put forth by the United States Veterans Administration and I do not have any mechanism in which to change it.”

Some World War II and Vietnam War veterans were given free cigarettes during those conflicts and subsequently developed smoking habits to deal with stress. The smoking habits continued into civilian life due to nicotine addiction.

The VA allocates a substantial amount of federal funds to IVH annually for facility construction and maintenance, resident care and a host of other initiatives. VA guidelines indicate IVH and resident smokers were not singled out by the VA, rather, the new policy applies to all VA facilities nationwide.

A May letter from Judith Johnson-Mekota, director of the Iowa City VA Health Care System, said the organization “has a strong commitment to protecting and promoting the health and safety of patients, visitors, contractors, vendors and volunteers.”

“The Surgeon General Reports of 2006, 2010 and 2014 concluded cigarette smoking is the number one preventable cause of of illness/disease and premature death worldwide. Studies have shown the harmful effects of smoking extend to co-workers and members of the public exposed to second-hand smoke. These reports indicate there is no risk-free level of exposure to secondhand smoke. There are also new studies that show risks to those exposed to thirdhand smoke.

“Therefore, the Iowa City VA Health Care System will transition to a smoke-free campus by July 1, 2019. This will include cigars, cigarettes, pipes and any other combustion of tobacco and non-Federal Drug Administration approved nicotine delivery system, including but not limited to electronic or e-cigarettes, vape-pens or e-cigars.”

IVH is one of the largest state veteran homes in the U.S. The facility is licensed for 113 beds for residential care and 474 beds for nursing level.