T-R PHOTO BY ADAM SODDERS – Woodbury Elementary School’s roof was partially lifted by the July 19 tornado, but much of the repair work is done. The piping visible in the center was replaced and the rock layer re-established after high winds warped the roof.

Marshalltown Schools’ elementary buildings are spread throughout town and are centers of activity for their respective neighborhoods. Students and parents were all impacted by the July 19 tornado.

The damage was physical and emotional. Both Woodbury and Franklin elementary schools dealt with significant building damage from the storm.

“I think it’s going well. There are still some things that pop up,” said Woodbury Principal Anel Garza of the physical building recovery so far. “Unfortunately, our gym roof is still the one that’s probably the most damaged. We still have some major leaks coming through there.”

The tornado lifted up part of the building’s roof, sending the rocks laid atop the building flying and warping the roof material. Despite continuing leaking issues with the gym roof, Garza said the rest of the roof is in good shape, with repair workers plying their trade as recently as May.

“According to our buildings and grounds crew, the other leaks that were caused due to the tornado were or have been repaired,” she said. 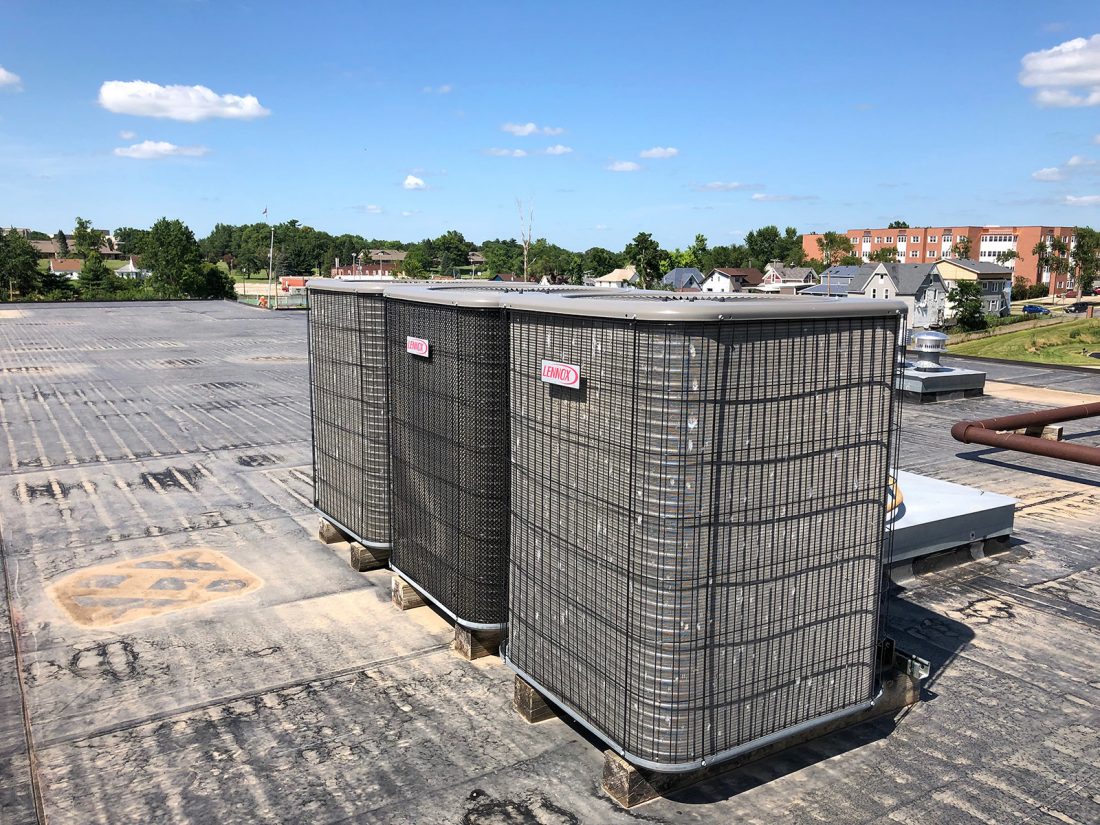 T-R PHOTO BY ADAM SODDERS – The Franklin Elementary School roof was also damaged by the storm. Repairs are complete and new HVAC units, shown here, are humming along atop the building.

Franklin Elementary Principal Tim Holmgren said the damaged part of that buildings’ roof, mostly located on the northwest side of the building, has been completely replaced.

“HVAC took a little bit longer because some of the aging equipment,” he said.

Those new units are now humming atop the roof, providing much-needed cooling air in what has turned out to be a hot summer so far.

Franklin lost its sports press box as a result of the storm. It was not replaced by another press box, but a new sound system for announcing middle school football games has been installed.

Holmgren said fencing and tree damage were extensive after the storm. The fencing where it was warped or damaged along the school grounds has been taken care of, but the trees will take a little longer to replace.

“We’ve got a plan in place to replace as many trees as we can,” Holmgren said.

The Marshalltown High School Class of 1969 is set to donate about 10 trees to replace the ones decimated by the tornado. Holmgren said the school grounds lost eight trees last year, so the donation will mean even more shade for students.

The tree donation and planting event are expected this fall.

The physical scars left not only on the Woodbury and Franklin school buildings but also on homes and businesses in the tornado-impacted area are healing. The storm also left emotional scars and the principals said there are still signs that students still have sharp memories from the storm.

“I can still see some hesitation when it’s storming outside,” Holmgren said of Franklin students. “To the best of my knowledge we still have some families who are not back in their homes.”

“I can still see some hesitation when it’s storming outside. To the best of my knowledge we still have some families who are not back in their homes.”

However, he said the students do well when it comes to tornado drills and community agencies have been able to provide small-group discussions about the storm both on- and off-site.

Garza also said students are still impacted by the storm.

“Our site coordinator for Bobcat University did schedule some tornado drills,” she said. “During those tornado drills, our kids were extremely alert. When they were in the site downstairs, they just wanted to share their stories. This was almost a year later and they’re still trying to discuss what happened to them.”

Garza said certain noises or smells can act as a trigger for some students’ memories of the storm. She said those children are able to talk to school counselors if they are struggling.

While much of the physical work on Woodbury is complete, there are still plenty of homes in northeastern Marshalltown suffering from the effects of the tornado. To help uplift that part of the community and offer something new to area kids, Marshalltown Schools secured a $50,000 KaBOOM! grant for a new playground area.

That area is being installed on July 19, the one-year anniversary of the tornado. Community volunteers will perform the build, and the designs include input from area students and parents.

“The parents and the kids were really good about trying to select pieces that we don’t already have,” Garza said. “The biggest thing for both students and parents were the swings. They really wanted the swings.”

Along with six swings, she said the new playground will include ever-popular monkey bars and pieces of spinning equipment for local kids’ enjoyment.

T-R PHOTO BY ADAM SODDERS – Woodbury Elementary School’s roof was partially lifted by the July 19 tornado, but much of the repair work is done. The piping visible in the center was replaced and the rock layer re-established after high winds warped the roof.

T-R PHOTO BY ADAM SODDERS – The Franklin Elementary School roof was also damaged by the storm. Repairs are complete and new HVAC units, shown here, are humming along atop the building.