Why are Marshalltown’s gas prices amongst the highest in the state? 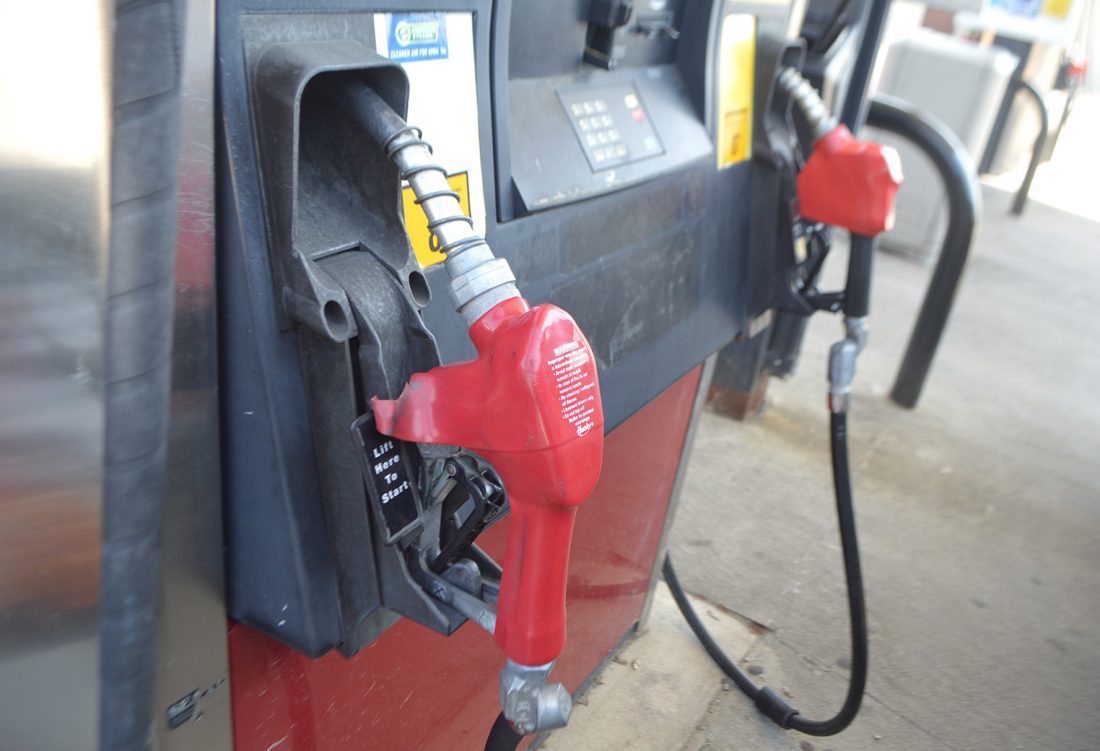 Marshalltown’s gas prices tend to be 10 to 20 cents higher per gallon than cities just 40 minutes away, data shows. The high prices mean some residents choose to fill up elsewhere when possible.

“I don’t get gas in Marshalltown unless I have to. I try to get it when I’m going to Ankeny or Bondurant,” said Marshalltown resident Meg Sponseller. “Years ago I was told by a gas station employee that we are higher here because the tankers have to drive that much further off the interstate to get here.”

Many residents don’t go out of their way to buy gas elsewhere, but still feel the impact of higher prices locally. 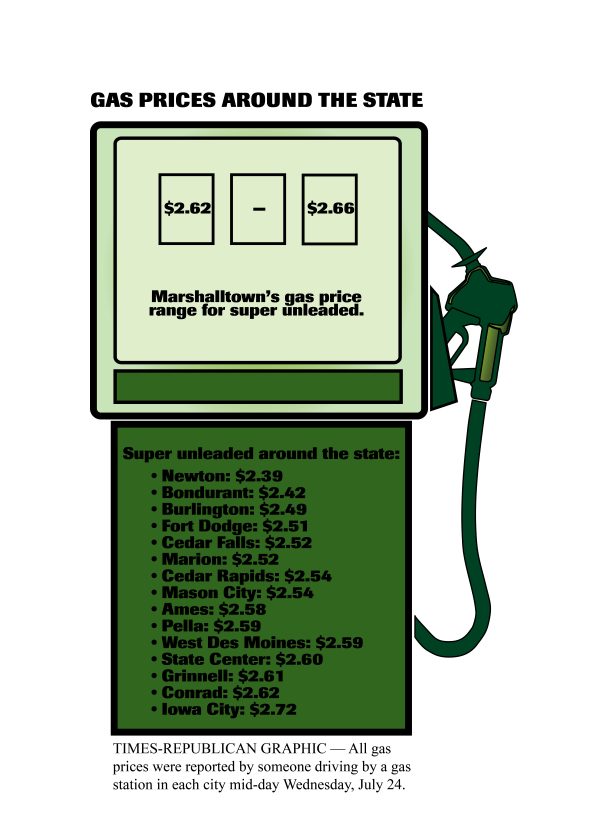 “I currently work about 35 miles out of town. I constantly am watching the prices to fill up for cheaper gas,” she said. “Marshalltown is usually higher but when I need it I have to pay it. Every time we go to Des Moines on Highway 330, you can see the gas stations that have much lower prices and it makes you wonder why they can do this and our gas is so high.”

A recent Times-Republican survey of gas prices in various Iowa cities confirms the higher prices locally. Gas in Bondurant was $2.42 per gallon while gas in Marshalltown was $2.62 on the date of the survey, for example.

Many residents said another point of concern for them was the relative uniformity of Marshalltown’s gas prices. For example, until mid-week last week, the majority of the city’s gas prices were the same – $2.66 per gallon – until prices dropped mildly into the lower $2.60s later in the week.

Iowa State University associate professor of economics John Winters said he pays a lot of attention to the gas and oil industry. In fact, his family operated gas stations outside of Iowa growing up.

He said it is common for gas stations in small- to medium-sized cities, like Marshalltown, not to compete aggressively.

“It’s the kind of thing where it probably doesn’t happen and it probably doesn’t have to happen,” Winters said. “Suppliers can basically just decide amongst themselves without ever really talking that they’re not going to be very competitive … They kind of often fall into this status quo.”

Many of Marshalltown’s gas stations have corporate ownership, from the city’s five Casey’s General Stores to its three Kwik Star stores, two Git n’ Go stores and more. Winters said those corporations are used to competing with one another in markets across the state and region.

Winters said its not common for such firms to seriously undercut one-another’s prices because of the potential for “eye for an eye” undercutting and lack of revenues and profits for all the stations in a city.

“The little guy has higher costs and can’t compete with them,” Winters said.

While many residents said they buy gas elsewhere when possible, Winters said many people buy gas in their own town. The difference between gas prices from one town to the next usually has to be very high for many people to drive out of town just for gas, he said.

How gas gets to Marshalltown

The gasoline pumped by motorists at their local gas station takes a long journey to get to the pump. Iowa is home to a major fuel pipeline system owned by Magellan Midstream Partners LP of Tulsa, Okla.

Magellan Communications Director Bruce Heine said the company does not own the fuel that goes through its pipeline, but is rather a custodian ensuring the product gets to endpoints, called terminals, is blended to the specifications of fuel companies, and loaded onto trucks that ship the fuel to gas stations.

“The average transportation fee or tariff for gasoline and other refined products on our pipeline system is 4 cents per gallon,” he said. “The terminals that can service Marshalltown could be one of three – it could be Des Moines, it could be Iowa City, it could be Waterloo.”

He said it is up to individual retailers to decide which terminal they go to to pick up fuel for transport. It is also up to them to determine the price at each individual station.

Is there cause for concern on price fixing?

Iowa Attorney General’s Office Communications Director Lynn Hicks said there are no current concerns he is aware of for Marshalltown when it comes to gas prices, but concerns can be reported to the AG’s office.

“Matching prices is not illegal. The problem becomes when it’s collusion or price fixing,” Hicks said. “Collusion is illegal, so if people have evidence of that they can report that. But just somebody looking across the street and saying ‘Hey, my competitor is raising prices 10 cents, I’m going to raise it 2 (cents),’ that’s not sufficient evidence of price fixing.”

He said the office also looks out for price gouging, but that law kicks in during an emergency situation, such as right after a natural disaster. In Marshalltown’s case, as residents report, the gas prices have been running higher than surrounding communities for decades.

Like Marshalltown, Iowa City also has generally higher gas prices than, for instance, nearby Cedar Rapids, according to the Gazette article.

According to the United States Energy Information Administration, there are several factors that go into gas prices. More than half of the cost is related to crude oil prices, while federal and state taxes, refining costs and profits, and distribution and marketing costs also play a role.

The further away from a distribution terminal a city is located, the higher the gas prices tend to be in that city. However, Iowa City prices tend to be some of the highest in the state even with terminals located nearby. The T-R confirmed that gas going to the Hy-Vee Gas Station in town is from Des Moines, about 60 miles away, but calls inquiring about where some other local stations get their fuel were not returned.

Despite its higher overall gas prices, Marshalltown’s cost of living is well below some areas where gas prices are lower, such as the Des Moines metro. A review of city ordinances did not reveal any disparity in the commercial property taxes paid by gas stations versus other types of commercial property.

Requests for interviews with Casey’s and Kwik Star officials were not returned.