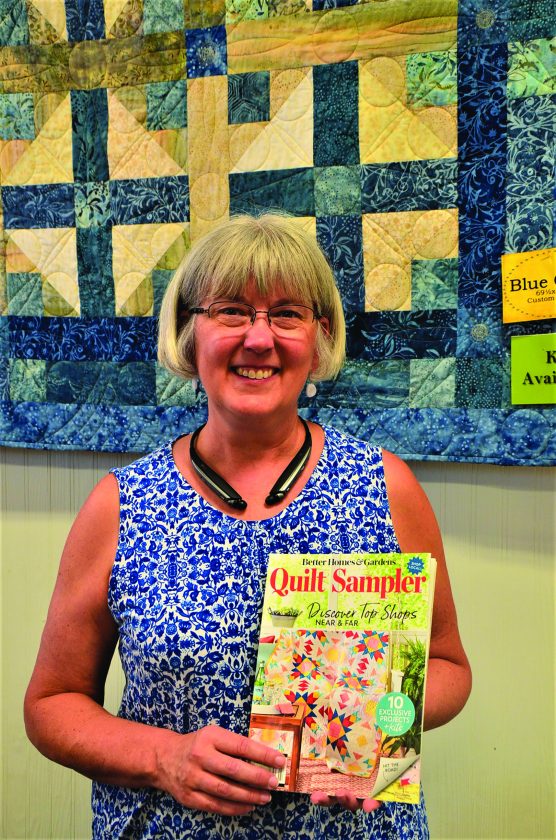 T-R PHOTO BY CHUCK FRIEND Heidi Kaisand, owner-operator of Conrad’s Hen & Chicks Studio, poses in the studio with a copy of “Quilt Sampler” magazine which recently featured the business.

CONRAD – Hen and Chicks Studio, a quilt shop in Conrad, has been chosen as one of 10 shops in North America to be featured in the Fall/Winter 2019 issue of “Quilt Sampler” magazine, published by Better Homes and Gardens.

Competition to be included in *”Quilt Sampler”* ran high — nearly 3,000 quilt shops were eligible to apply . Owners submitted a detailed application of their history, business promotions, charitable work, teaching schedules and design philosophies. A panel of quilt experts, spearheaded by the “American Patchwork and Quilting” staff, reviewed all applications to select the 10 shops.

Hen and Chicks owner Heidi Kaisand of Union, is no stranger to the art of quilting.

“I have been quilting since I was nine-years-old,” she said. “My grandmother taught me and I loved it while growing up. Yet I went to school for something else. But one thing led to another, and in 1992, I was able to make quilting my full time profession.”

For the next 17 and one half years, Kaisand worked at Meredith Corp. in Des Moines with their many quilting magazine titles. After that she worked as national sales manager for APQF, a long-arm quilting machine manufacturer from Carroll, Iowa.

In 2011, Kaisand opened Hen and Chicks Studio, a fully-equipped retreat center and retail store in Conrad. Then in 2015, she purchased and edits a trade publication — American Quilt Retailer — for quilt shop owners which is designed to help quilt shop owners run their businesses effeciently.

While working for Meredith Corp., Kaisand was on a team that created the “Quilt Sampler” magazine in 1995. For years, her job was to notify the quilt shop owners their shop was selected to be featured in the national publication, as well as to arrange for featured photography and text.

“It has come full circle for me,” Kaisand said , “I called many people then and now I got the call it is humbling and exciting!”

“Owning a quilt shop reflects the owner’s personalities, so it makes “Quilt Sampler” a very interesting magazine. Every quilt shop has its own unique flavor. And reading about the various shops makes quilters want to go from shop to shop,” Kaisand said. “Quilters are known for traveling and that is what has made this magazine successful, when people travel evenlong distances to hit all of these shops.”

Kaisand said being selected is an honor, but it also helps her recognize her customers are special and she could not do what she does without them.

Hen and Chicks retreat center is available to quilters and crafters on a 365 day a year basis.

“A good week for me is one where we have to hustle around at night to clean up after one group leaves, knowing that another group will be coming in the next morning,” Kaisand said. “Retreats show me people love being creative and that fills my cup, but I also know that by bringing all of those people to town for retreats also benefits the community when people go buy gasoline, visit the grocery store or check out other businesses such as Something to Share or the Chalet.”

The latest issue of *”Quilt Sampler”* hit the newsstand Aug. 23, and is also available for sale at Hen and Chicks. Besides the article on the > studio itself, each shop owner was asked to feature one of their projects to accompany it. Kaisand chose the quilt “Blue Oasis” which is her design using quilt blocks appropriately named “Hen and Chicks.”

By the end of the day, Kaisand said the magazine brings awareness to he quilting community that we are in Conrad..

“Even though Conrad is not some metropolis on everyone’s map, this town has something to offer that is worth traveling and stopping by for,” she said.

Quilting at a Glance …

The art of quilting has changed dramatically since the days of quilting bees in church basements and quilting is experiencing a major renaissance. A Quilting Consumer Insights Study completed by the American Patchwork & Quilting Magazine reports that the US quilting market is composed of 4.2 million avid quilters. Further research show that readers of the magazine spend and average of $1,165 per year on quilting supplies and complete nearly 11 projects per year.