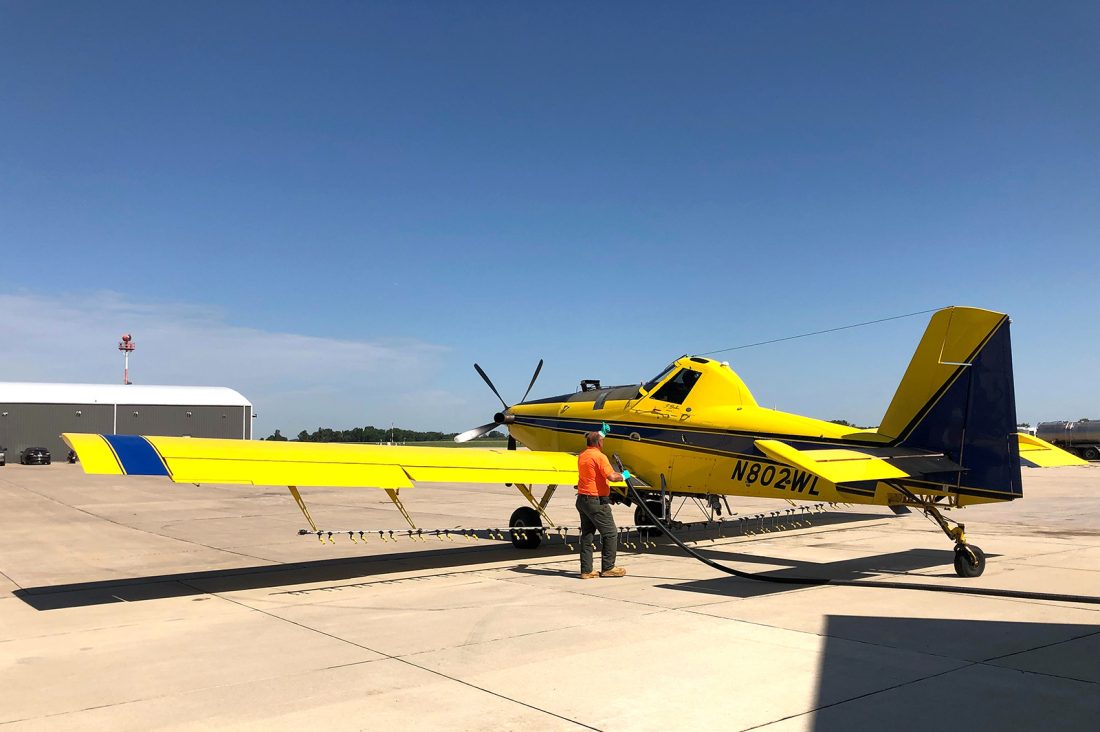 T-R PHOTO BY ADAM SODDERS
A crop duster airplane piloted by Jason Barber finishes its mid-morning fuel-up at the Marshalltown Municipal Airport. Barber had just returned from spraying fields in the Melbourne area for Meyer Agri-Air.

Even those Central Iowans not involved in agriculture know the sound of single-engine aircrafts zooming overhead, spraying corn and soybean fields during all hours.

Those aircraft, their pilots and teams play a key role in ensuring crops are protected during a critical part of their growth season.

“Aerial spraying is used as a very timely method of applying products for plant health or eradicating insects, or in some instances controlling weeds in the crops,” said Wellsburg-based Meyer Agri-Air Inc. owner Joel Meyer.

While he no longer straps into the cockpit of the small airplanes which are a common sight in Central Iowa skies, Meyer has decades of experience in piloting and the general air-spray business.

“It does not roll across the ground, so it does not transport any diseases from field to field since we’re in the air above it,” he said.

The aircraft can cover an incredible number of acres over the course of a day, Meyer said, providing another advantage over ground-based equipment.

In Marshall County, many aircraft fly out the Marshalltown Municipal Airport. As they do their work throughout the day, the pilots return to the airfield to refuel and resupply with fungicide, insecticide or other products. The planes have a noticeable row of sprayers lining the bottom of the aircraft parallel to the wings.

Iowa State University Extension field agronomist Meaghan Anderson also said crop dusters are a key factor in ag this time of year, and they have a short window of time to work during the regular crop growing season.

“Typically, we tell people that they would start spraying around tassel time,” she said. “From the time it produces silks, which would happen around the same time as tassels, you may have 25 days or maybe a month to spray.”

After that point, Anderson said the benefits of spraying against insects, fungi or other diseases is often not worth the cost of paying for the spray in the first place.

She said one disease spraying protects against is gray leaf spot, a fungal disease. Another threat Anderson has noticed in Central Iowa fields this summer has been the presence of Japanese beetles at the edge of corn fields and thistle caterpillars in soybean fields.

“In some fields, those have been more dramatic than anything I’ve ever seen as far as insect pressure,” she said of the caterpillars.

The goal of the sprayers is to get the product from the plane to the canopy of the plants’ leaves, Anderson said. The health of those leaves is a primary determiner in how much each crop yields.

Meyer said pilots must become experts at aircraft maneuvers to stay safe. The planes must get low and close to the crops while they spray and stay clear of any obstacles like trees or windmills.

Meyer said pilots are also careful to avoid large events or gatherings of people, such as schools or summer events like RAGBRAI.

“There are times that we can’t safely fly a field with an airplane, and we may have to use a helicopter for that,” he said.

Specifically, Meyer said the helicopter his company uses is an excellent tool for spraying among towering windmills that have grown to dot much of Iowa’s countryside. The helicopter can fly slower and maneuver better than the faster airplanes.

Pilots at regional airfields are working around the clock during the daylight hours to keep fields shielded from multiple threats. Farmers and agriculture retailers will hope their efforts provide a good yield in what has been a relatively difficult crop farming season.